Posted on December 9, 2019 by gardeninacity

The garden of Jean Morgan in Louisville, Colorado, is bursting with personality. 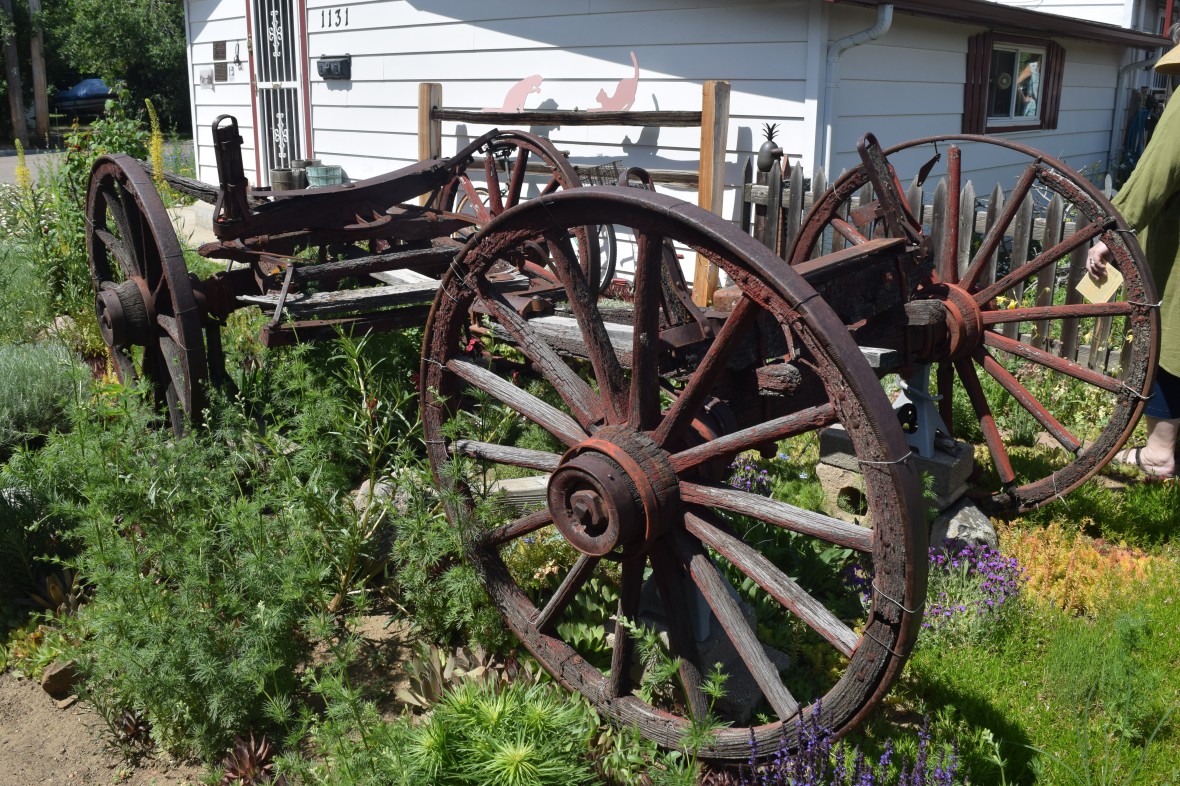 Jean’s house started out as a miner’s cabin. She’s added on to the original structure, but it’s still pretty small. Initially, the 25 x 50′ lot was pretty much barren, but she has gradually transformed it into a xeric garden full of native plants. 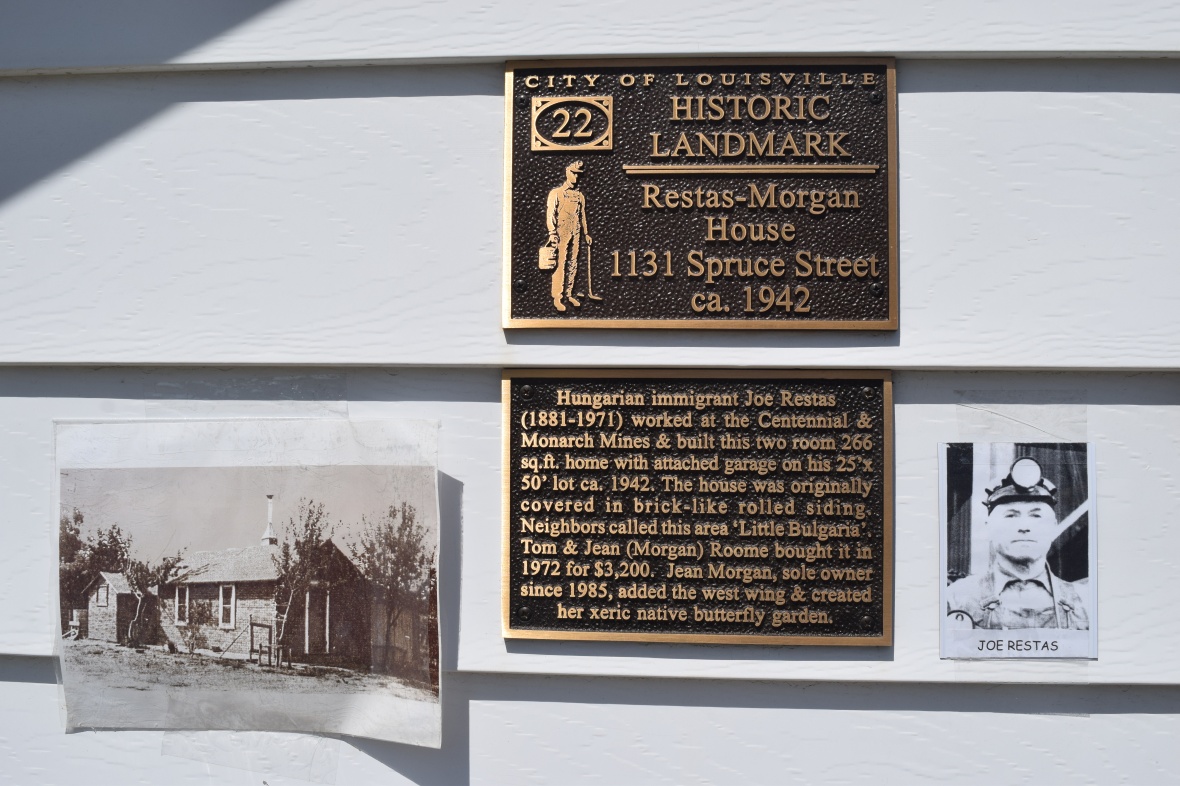 The house today has been designated a historic landmark. Louisville was once a center of coal mining, but the mines have been closed since the 1950s. 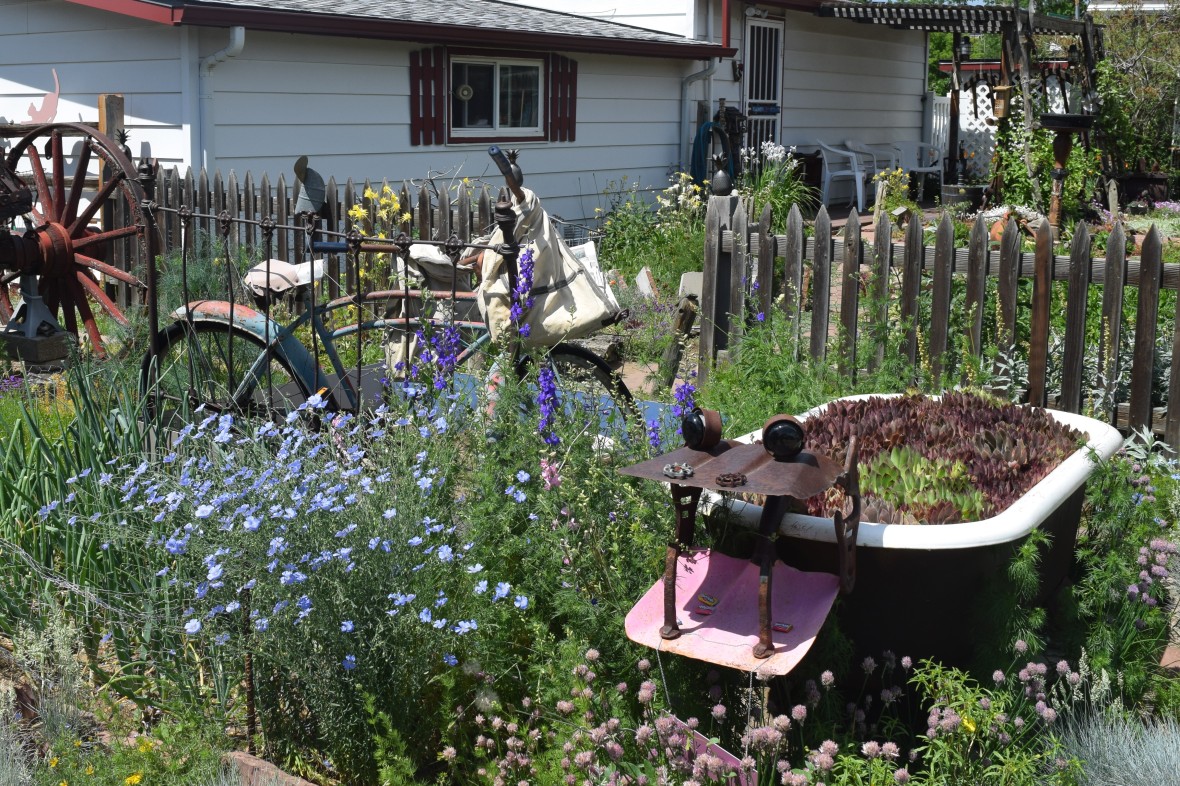 Jean’s garden was initially inspired by her love of butterflies. But it’s also full of playful humor, for instance the hippo planter found on the parkway, next to a lovely patch of Wild Blue Flax (Linum lewisii). 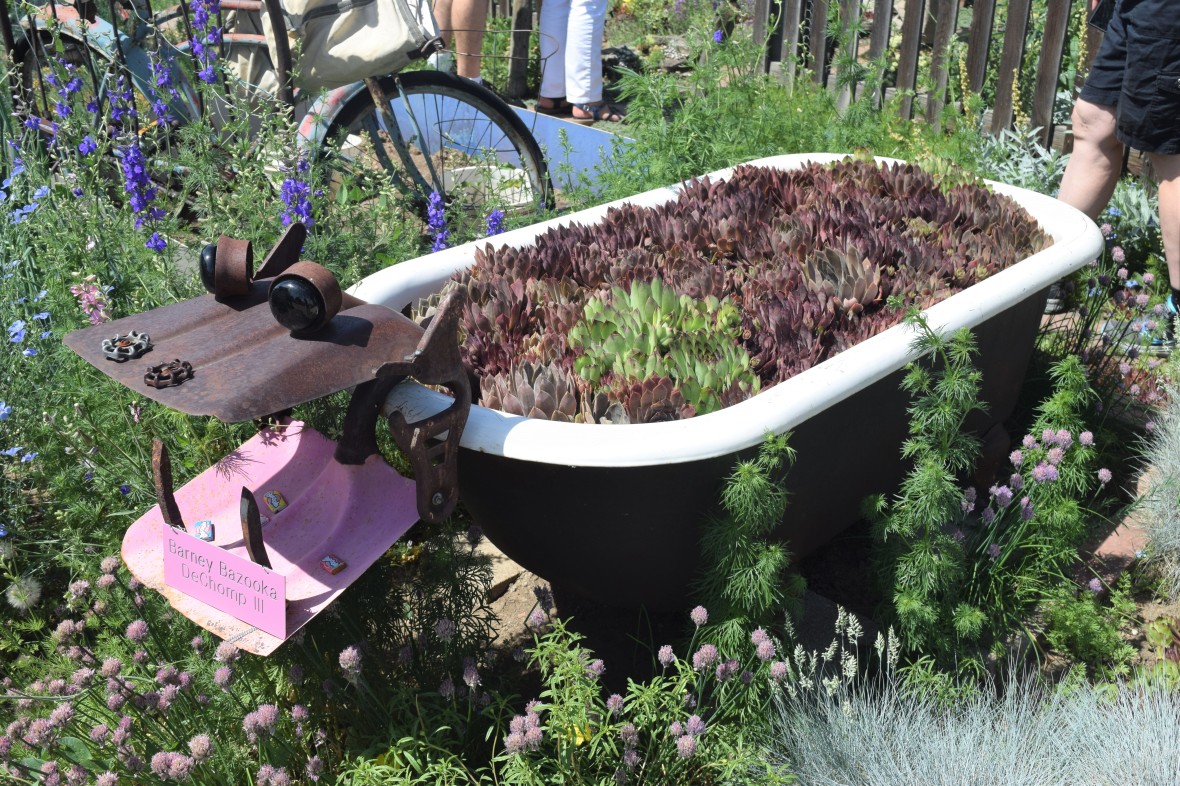 The hippo is made from an old bathtub and various bits of metal scrap. He’s planted full of Sempervivum and also has a name – Barney Bazooka DeChomp III. 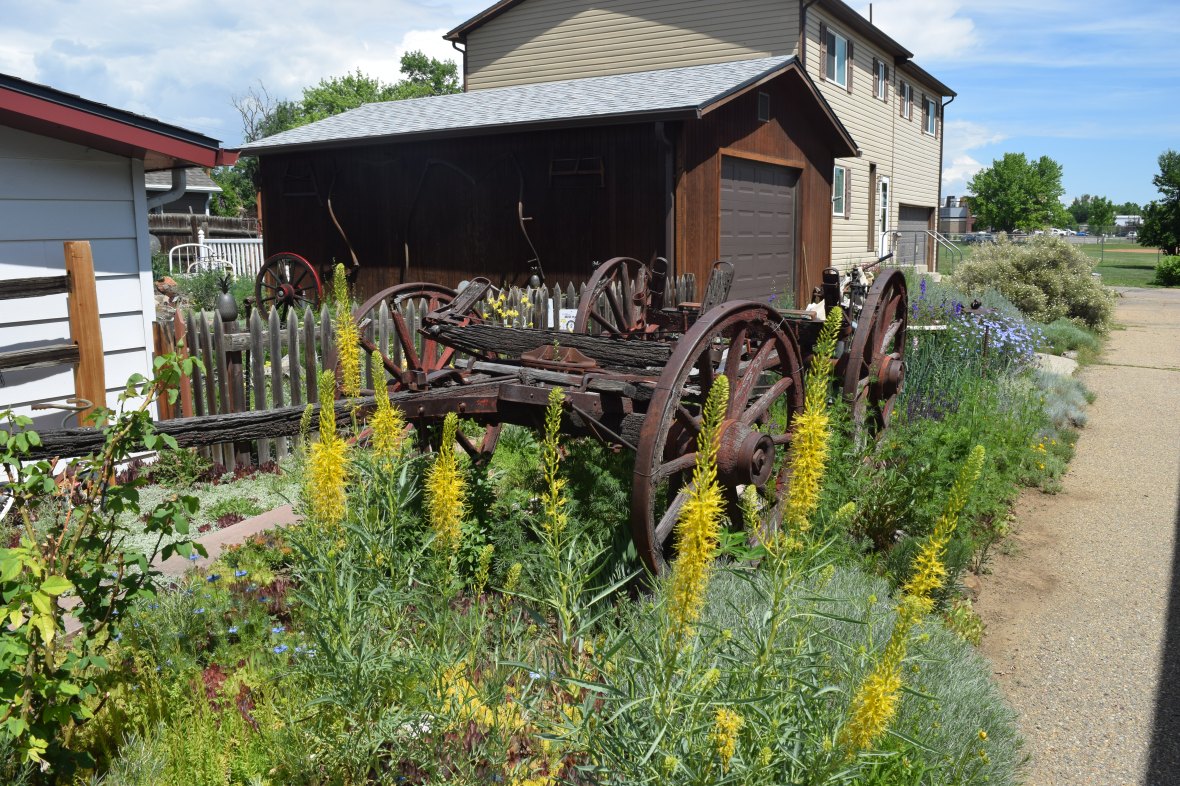 There are lots of relics from the American West’s earlier days, like the horse-drawn wagon above. That yellow flower is Prince’s Plume (Stanleya pinnata).

The heart of the garden consists of beds of succulents and other perennials, with stone paths meandering throughout. 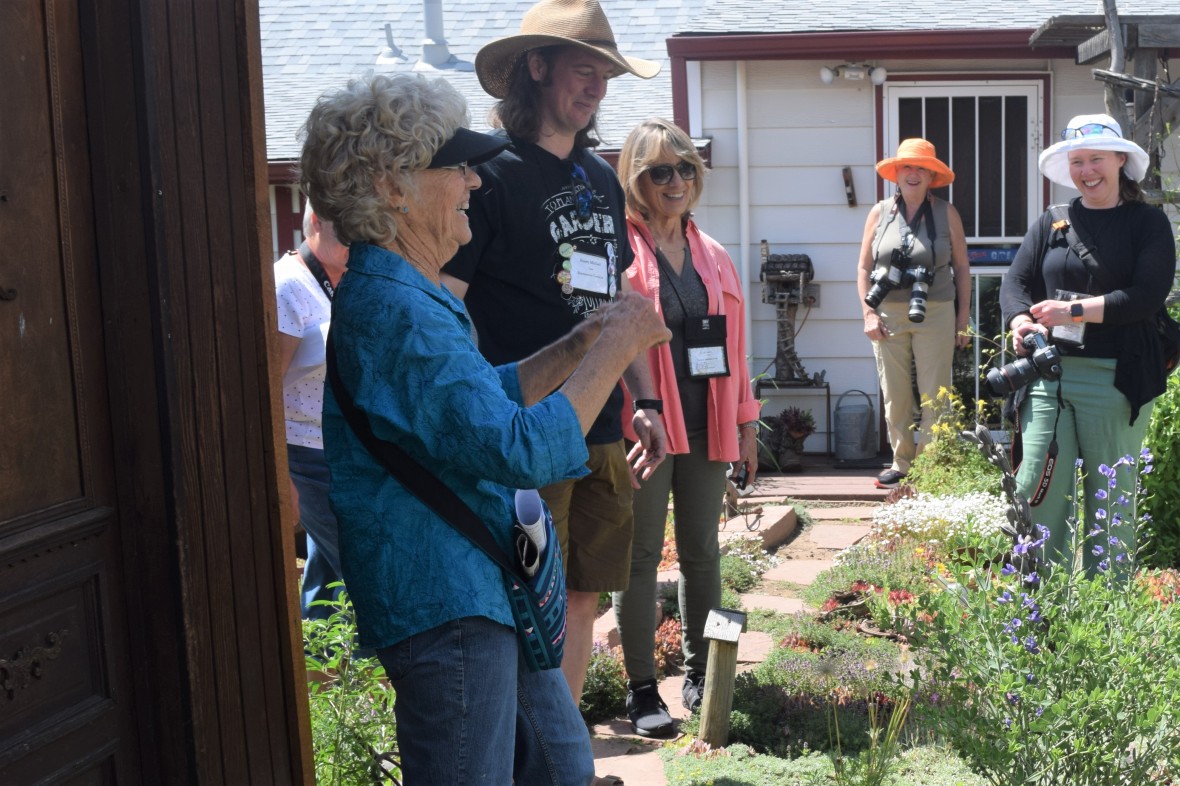 Jean (above, far left) was full of delightful stories and could not have been more welcoming. She also has a mischievous side. She gleefully told us of how she used a dried rattlesnake rattle to make a visiting Texan jump with fright. 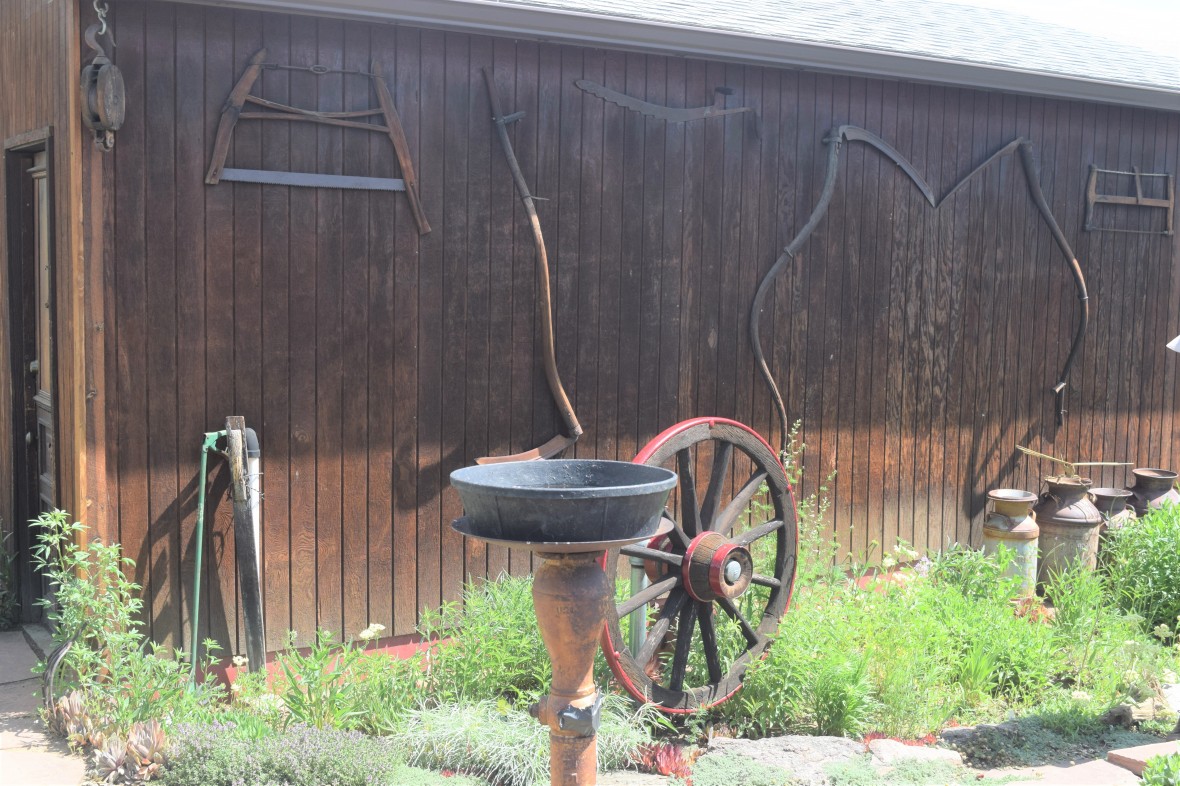 Scythes, saws, and milk pails from an earlier era.

Some gorgeous Penstemon and Tradescantia (not sure of the species) growing against the barn wall.

I’m pretty ignorant about succulents, but I do love this mix of color and form. 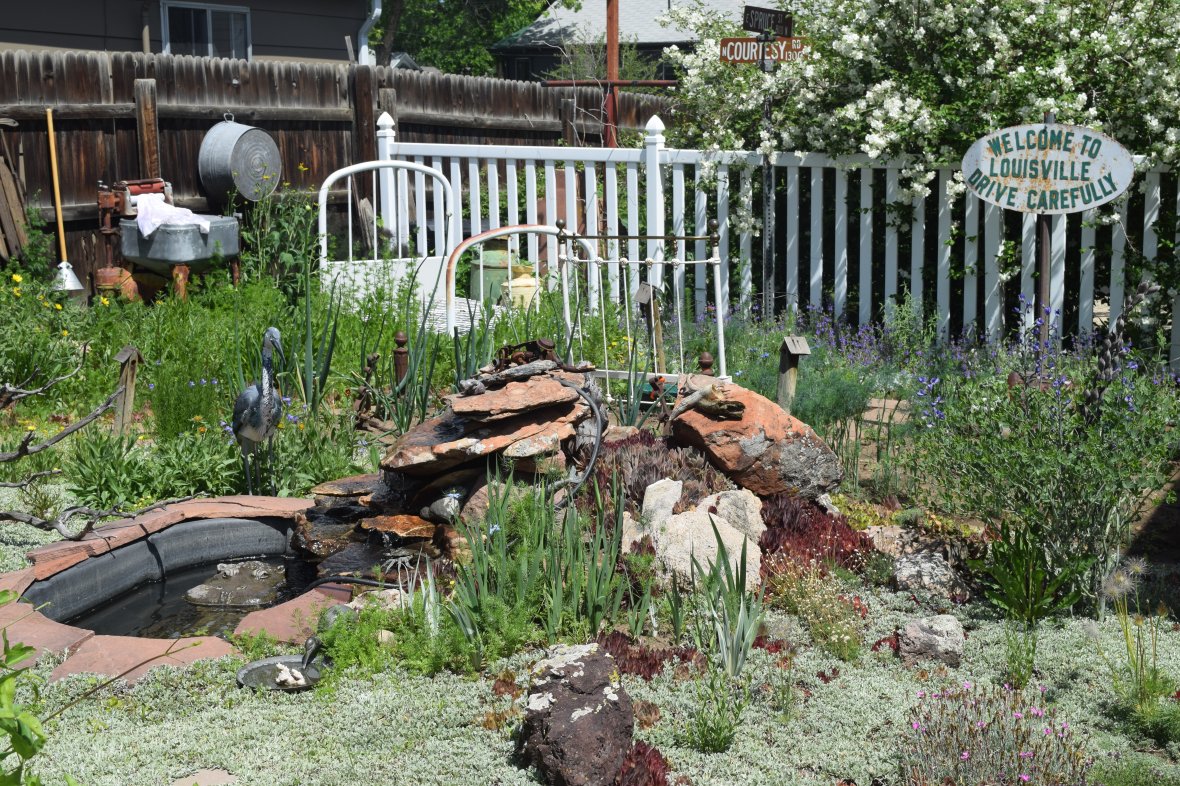 A tiny pond with waterfall sits at the center of the garden.

The water sparkles in the sunshine of this dry land garden. 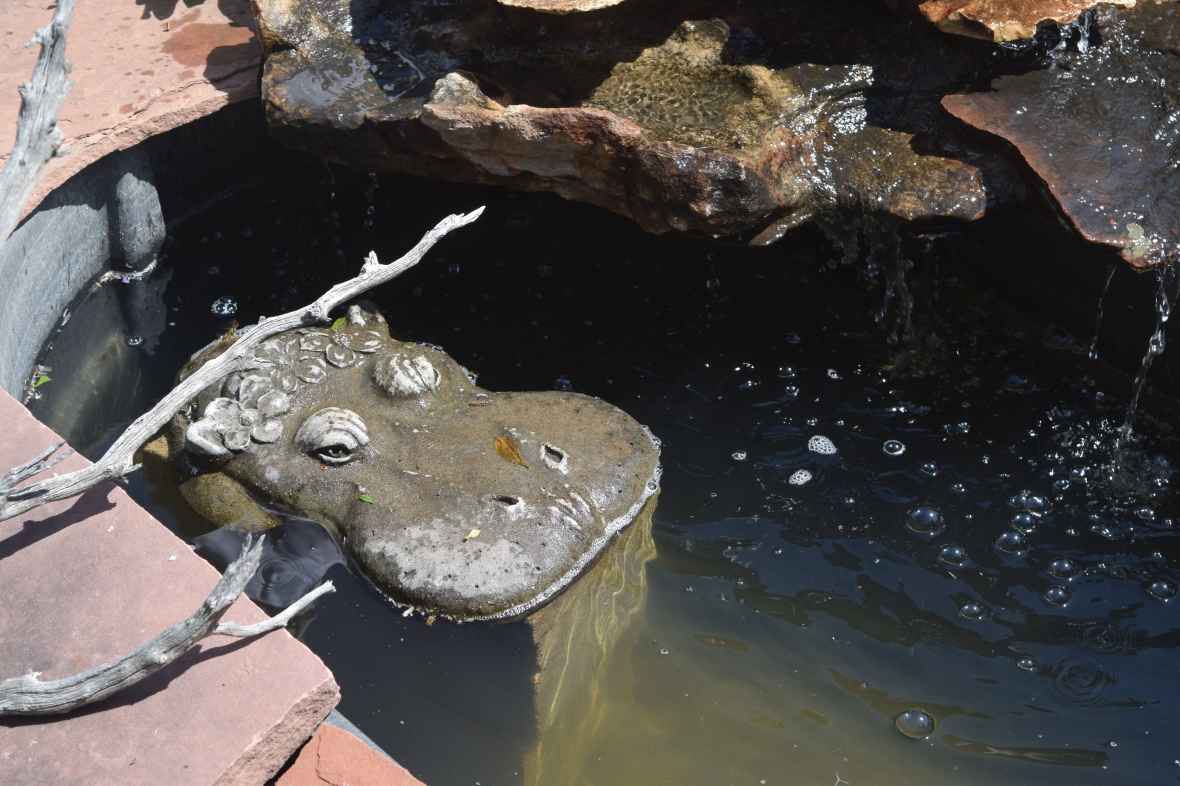 And look, another hippo!

This cactus (I don’t know the name) bears gorgeous red flowers. They complement the nearby blue Nigella (Nigella damascena). 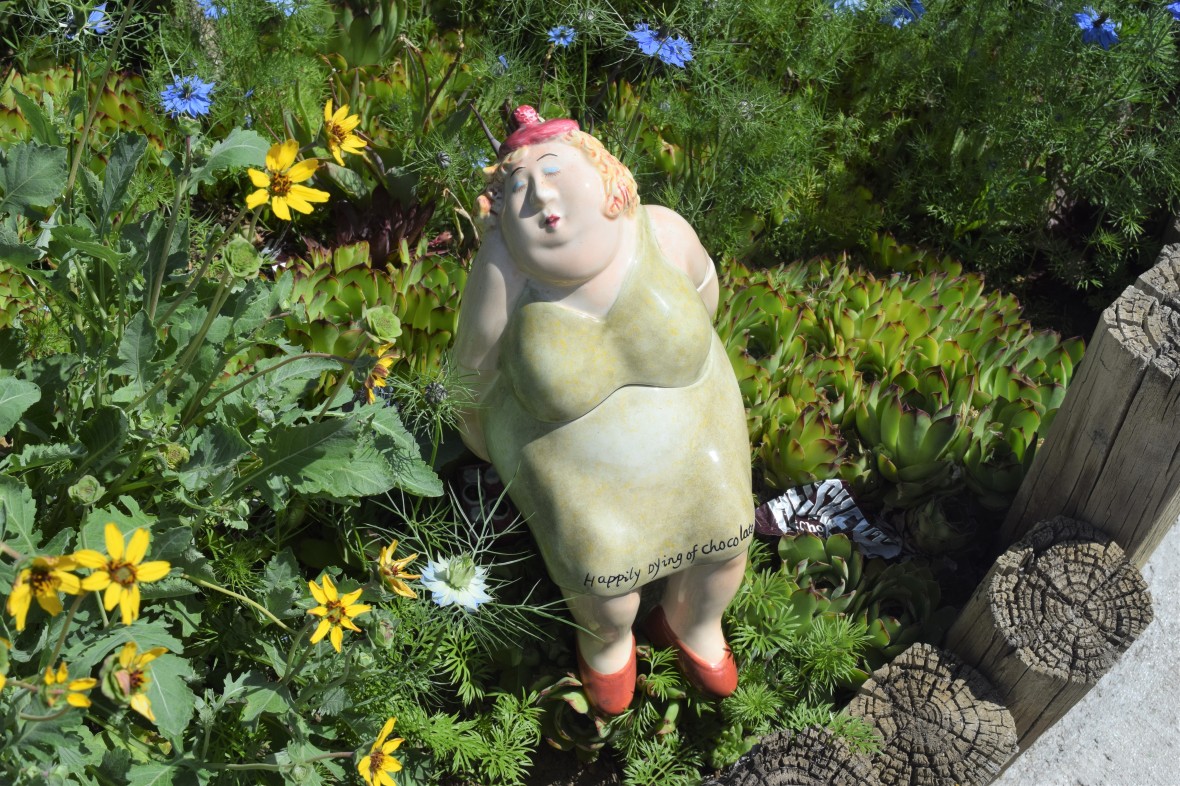 There’s a botanical pun on the parkway facing the other street. Next to some Chocolate daisies (Berlandiera lyrata – lower left) is a ceramic lady bearing the legend: “Happily dying of chocolate”. Note the chocolate wrappers nearby.

This is a garden that is certainly rooted in its place – its climate, soil, and human history – and also in the needs of native butterflies and other creatures. But it also marked by the playful personality of its creator.

17 Comments on “From Miner’s Cabin to Xeric Butterfly Garden”