After we reluctantly left Cap Chat, we headed back towards Montréal along the north coast of the Gaspé Peninsula. On the way we stopped at the Reford Gardens, also known as Les Jardins de Métis.

Reford Gardens started out as a fishing camp owned by a wealthy Montréal family. In 1926 the owner, Elsie Reford, began transforming part of the land into extensive gardens that would eventually cover more than 20 acres.

We walked through a shaded woodland garden that follows a fast-flowing stream.

The stream banks are lined with ferns, shrubs, and mossy stones.

There is a wide variety of woodland plants. I couldn’t recognize this one, is it Kirengeshoma? 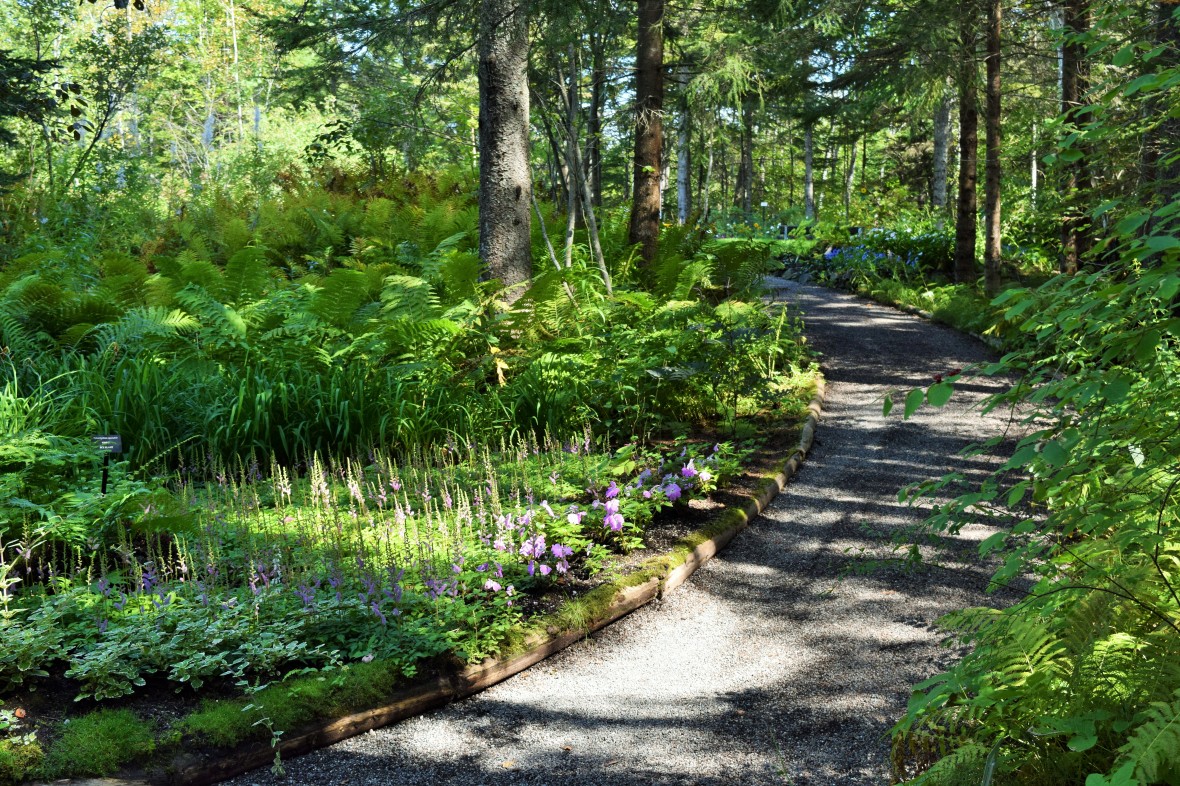 The curving paths and blocked views make this part of the garden a bit mysterious. 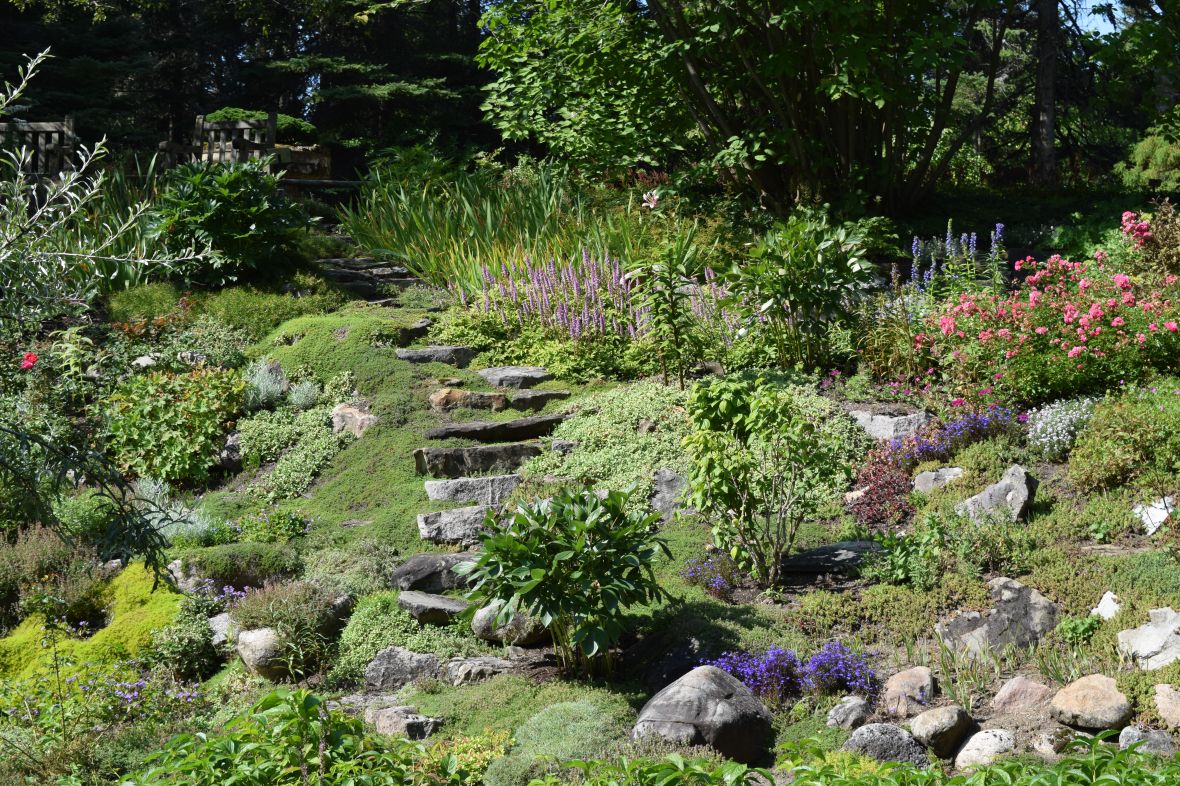 Eventually we came to an open glade. Reford Gardens is famous for the Himalayan Blue Poppies (Meconopsis betonicifolia) that bloom here in late spring and early summer. Successfully growing these difficult plants was one of the proudest accomplishments of Elsie Reford. I would dearly love to visit when the Meconopsis are in flower.

Still, there were other colorful flowers to enjoy, like these late-blooming roses.

And there were quite a few Willow Leaf Gentians (Gentiana asclepiadea) to be seen.

Next we came to the sunny Aleé Royale, also known as the Long Walk, which reminded me of some of the long flowering borders we had seen in the UK. 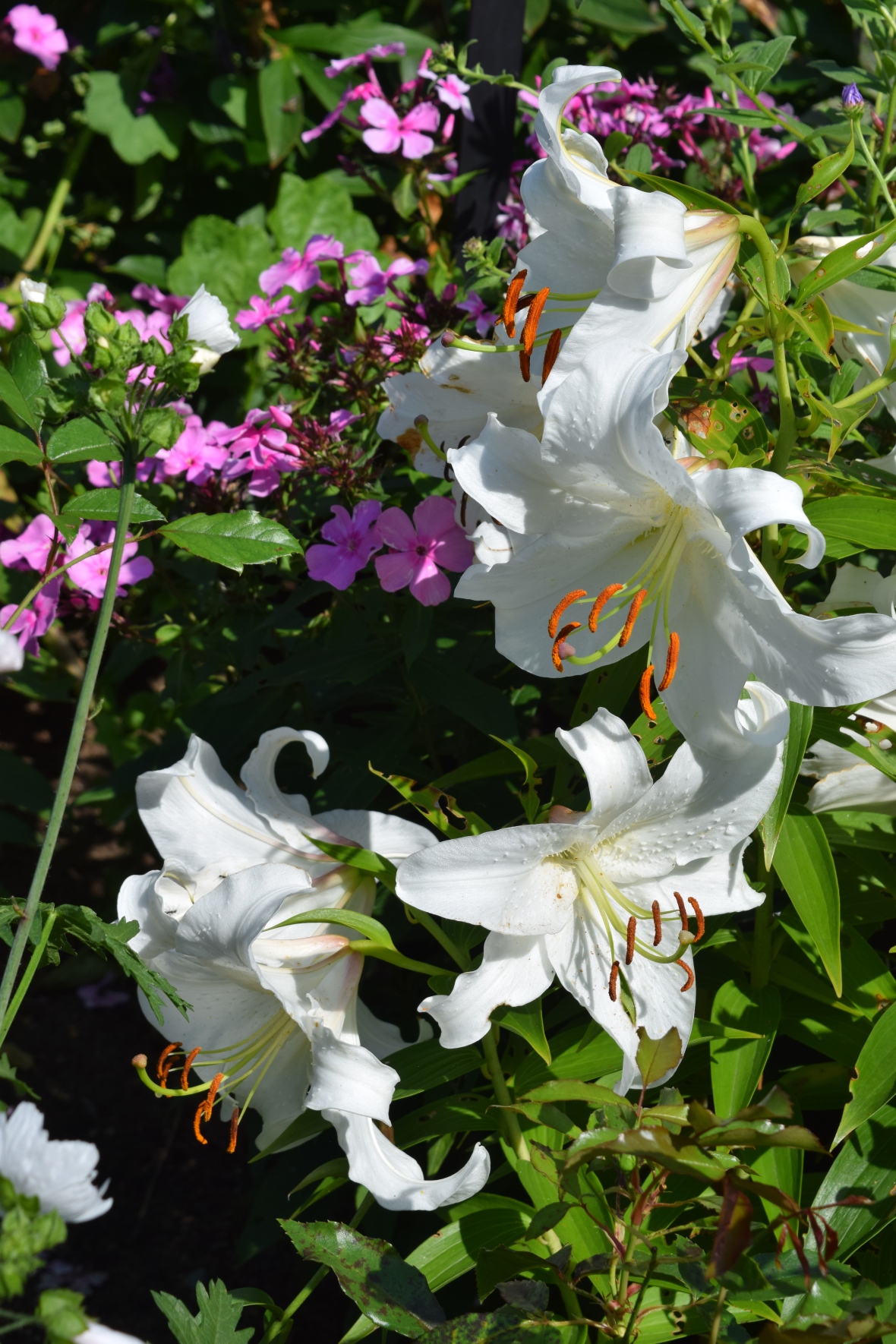 Lots of Oriental Lilies (this looks like ‘Casa Blanca’), so the air is sweet and I am happy.

At the end of the Long Walk you can see the old lodge, which dates to the 1880s. There are exhibits inside about the Reford family. They came here to hunt, fish for salmon, ride horses, and engage in other vigorous outdoor pursuits. If I had been invited, I would have spent most of my time reading on the wraparound veranda.

From the house there is a path and a wide lawn leading to the Métis River.

Generally I am not a big fan of clipped evergreen shrubs, but I thought the suggestion of “salmon” jumping out of green waves was pretty clever.

Where the path ends there is a sort of terrace with a fine view of the river.

Leadwort (Ceratostigma plumbaginoides) was blooming it’s heart out with truly wonderful blue flowers. UPDATE: Laura points out that this is actually Blue Piimpernel (Anagalis monellii). What a great plant this is, almost makes up for the lack of Blue Poppies.

That’s enough for now, but we are by no means done yet. There’s lots more to show you in the next post, including Reford Gardens’ International Garden Festival.

In the meantime, have you ever seen Himalayan Blue Poppies in bloom?

59 Comments on “Reford Gardens, Part I”