Another memorable experience from the Toronto Garden Bloggers Fling back in June was our tour of Cabbagetown gardens. Cabbagetown is a neighborhood east of downtown Toronto. Originally home to Irish immigrants so poor they grew cabbages in their front yards, the area slid into a long decline before gentrification began in the 1970s.

As is often the case, artists were in the vanguard of that gentrification and they still give the area an informal, offbeat vibe. However, housing prices have apparently gotten so high that struggling artists who are newly arrived should probably look elsewhere for a place to live. 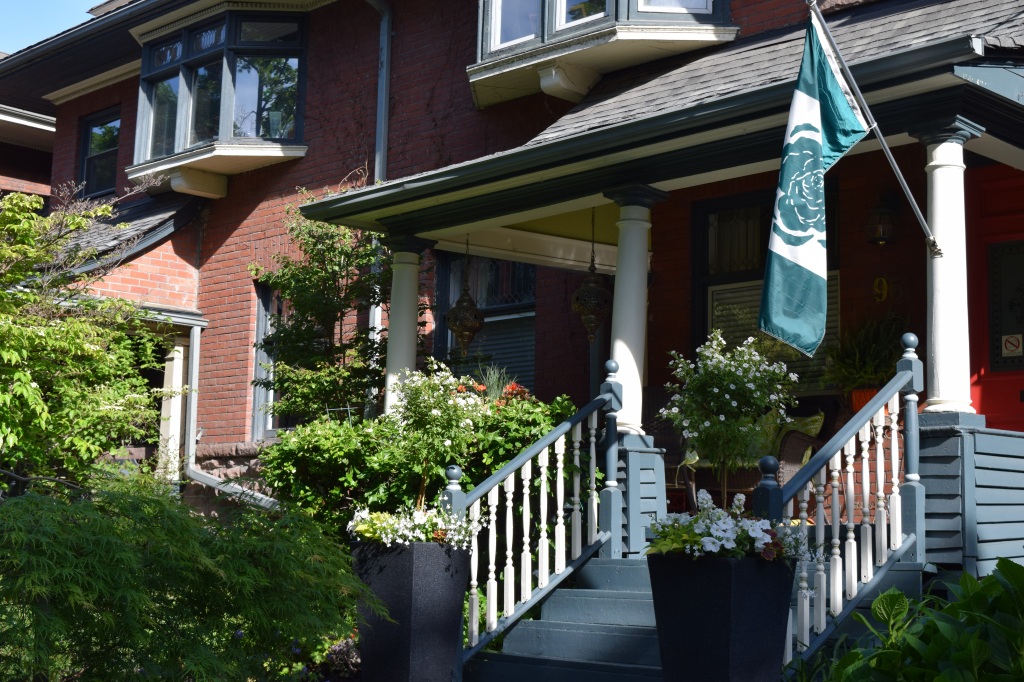 This is a neighborhood of red brick row houses with stoops and tiny front yards.

I didn’t see any cabbages growing in those front yards (the streets were too shady, in any case), but I did see many flowering containers, some of them rather impressive.

Actually, we Flingers were lucky enough to get a preview of the annual neighborhood garden walk, courtesy of the Cabbagetown Preservation Society. So you can see that both human and feline residents were quite welcoming, though the cats maintained a certain dignified reserve.

While the streets of Cabbagetown make for a very worthwhile stroll, the most interesting stuff was behind the row houses. This path set the stage for what we were to see.

The back gardens were not as tiny as those in front, but they still challenged their owners with getting the most out of very limited space.

They were mostly covered with pavers or gravel. Small garden beds were lushly planted. 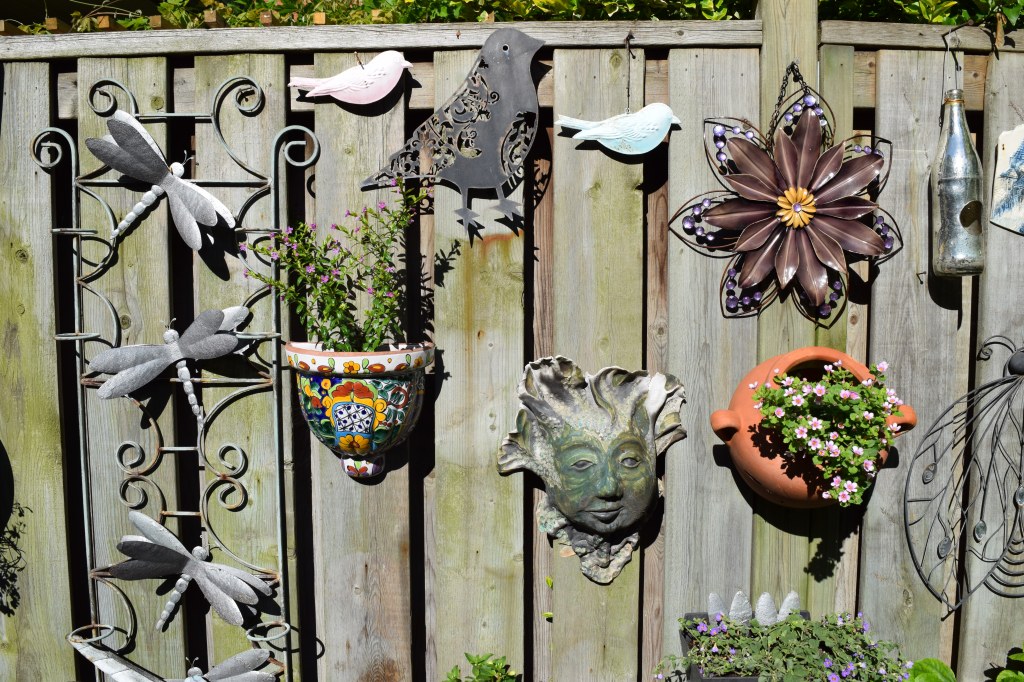 Almost every vertical space was used to provide visual interest – artistic, botanical, or both. 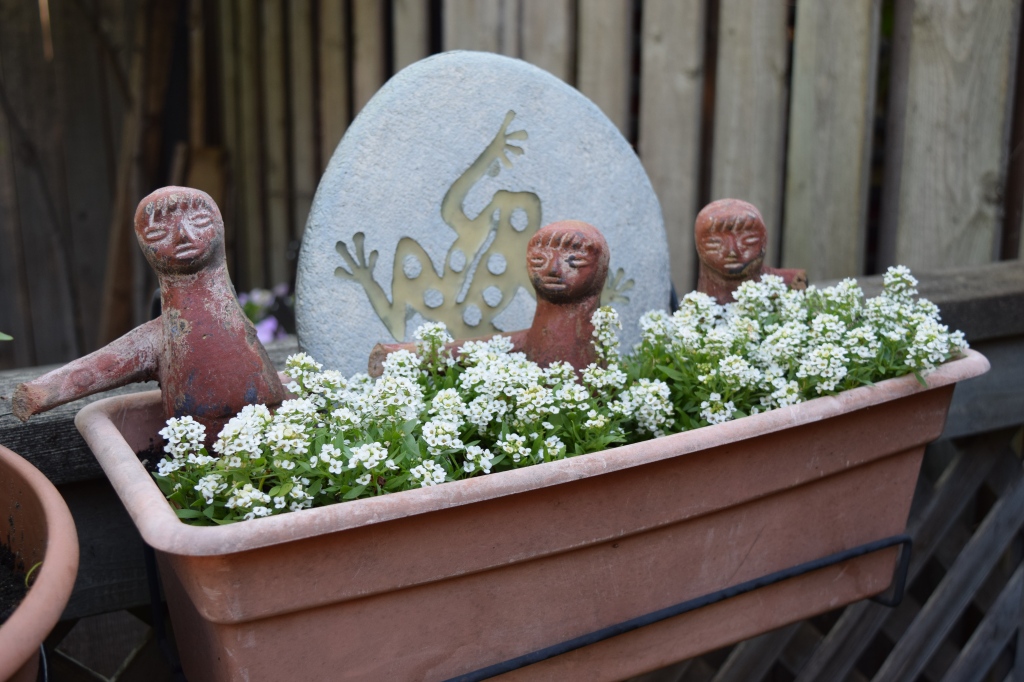 I like this simple planter filled with Sweet Alyssum, though I think those clay figures are a bit grim. Nice frog. 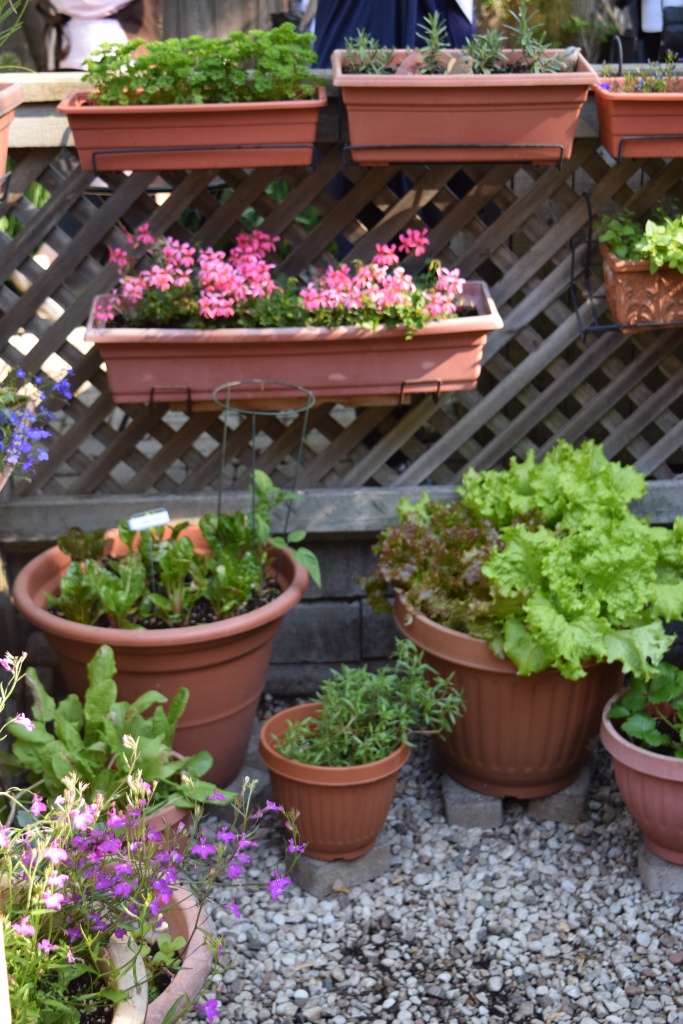 Look out for the giant cat, dwarves! Nice job on those chives, though. 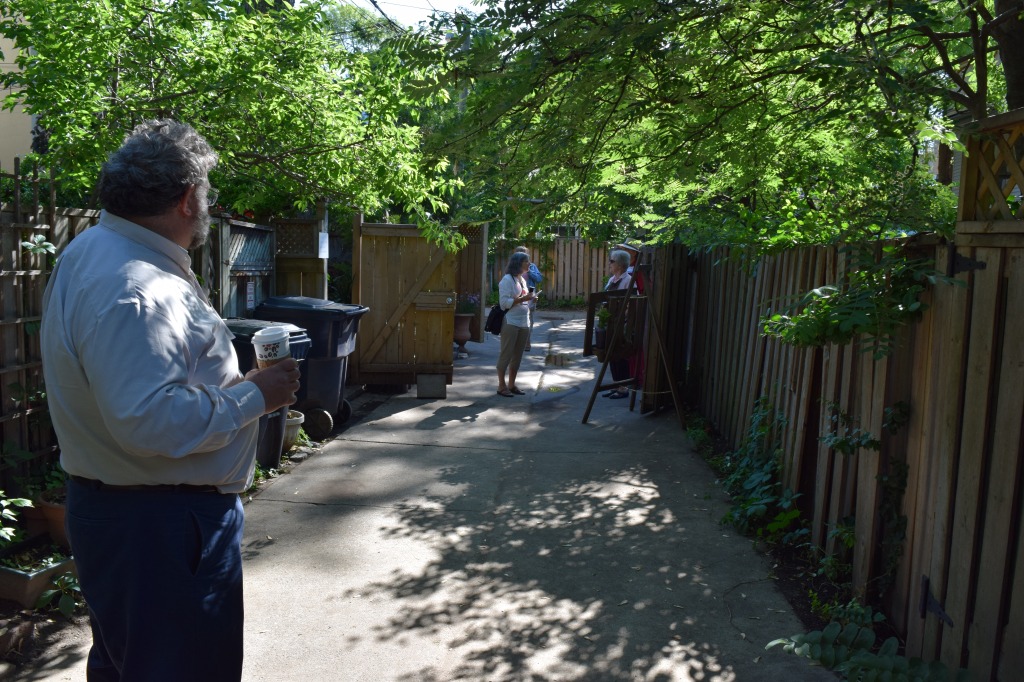 Behind the little back gardens were narrow lanes, what we would consider alleys in Chicago. The difference being that these are meant to function more as a public space, a venue for neighborhood parties and so on. 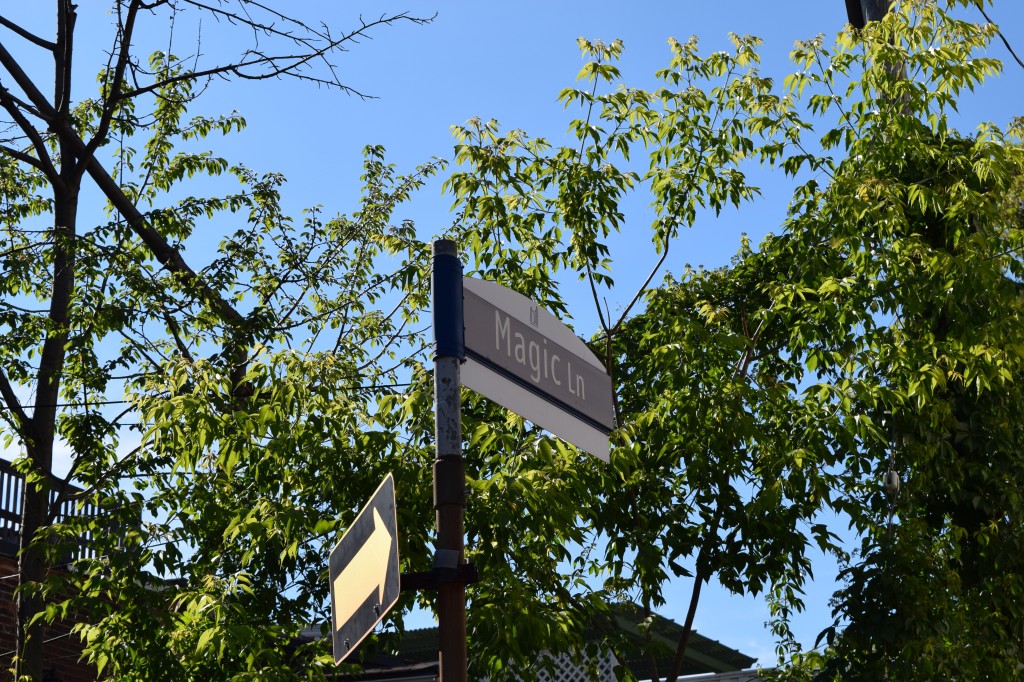 I would be curious to know the origins of this name. We followed Magic Lane from garden to garden for some distance. 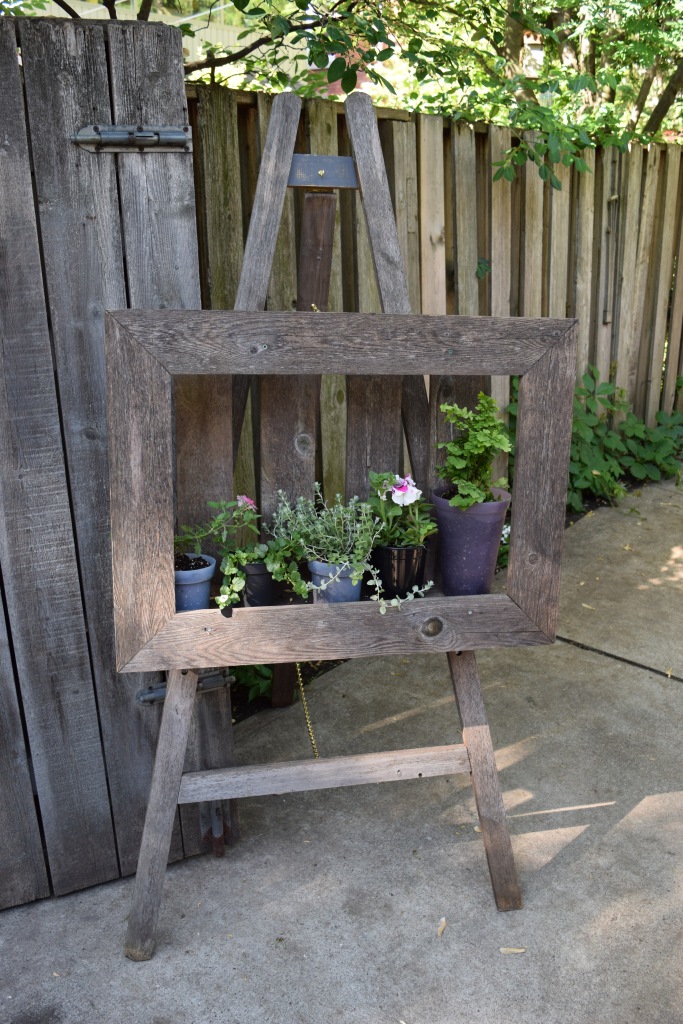 Talk about a still life. Many of us thought this was just brilliant. 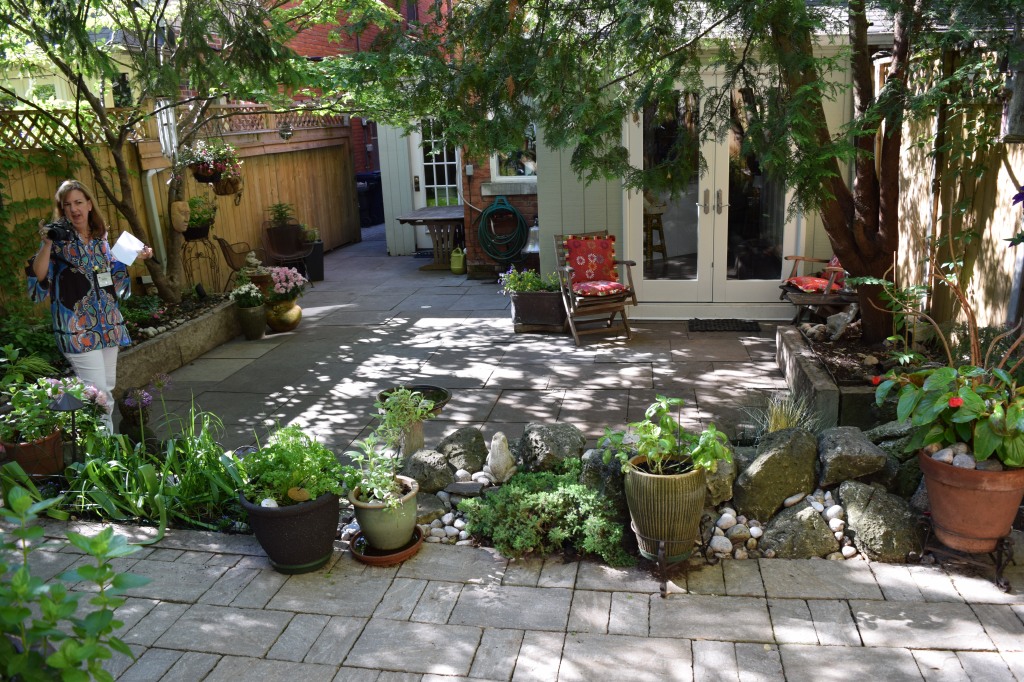 Another shady back garden. 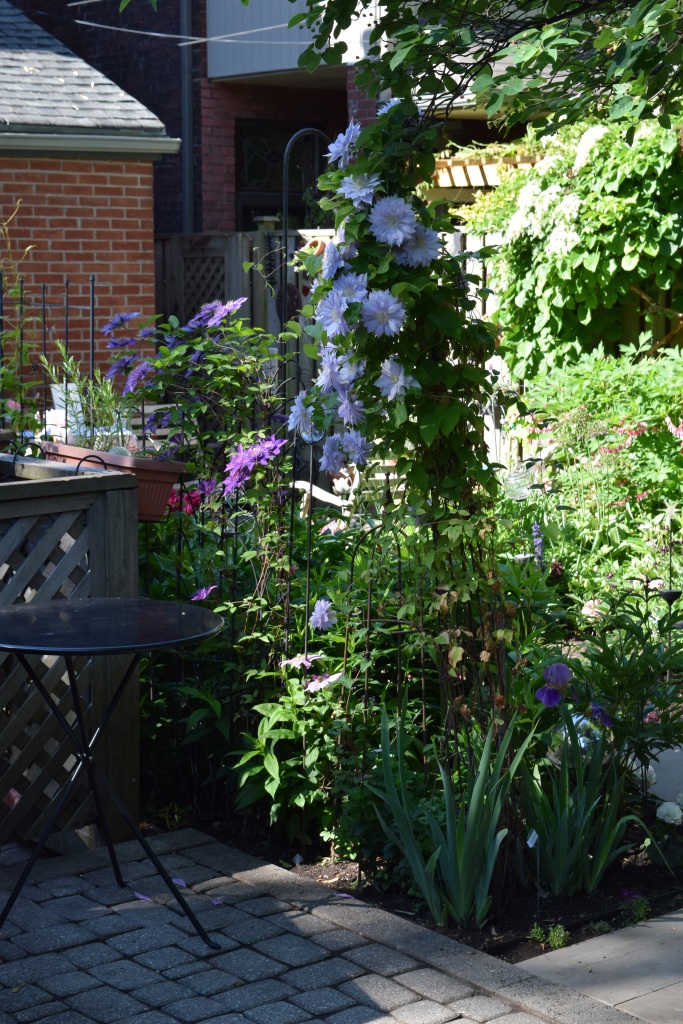 A beautiful Clematis, though I usually don’t like the frilly double blooms.

A crane (I think) making itself at home in the Japanese Forest Grass.

A quiet place for green thoughts in a green shade, as the poet said.

The gardens we saw in Cabbagetown were like little jewel boxes, but as they seemed to be joined together through an admirable sense of community, they combined to make for a substantial treasure. They certainly made an impression out of proportion to their size.

44 Comments on “The Jewel Box Gardens of Toronto’s Cabbagetown”