So Judy and I just raised our first Monarch butterflies to adulthood. We were nervous about trying, but then we read that only about 5% of Monarch caterpillars in the wild make it to adulthood. We figured we could do better than that. 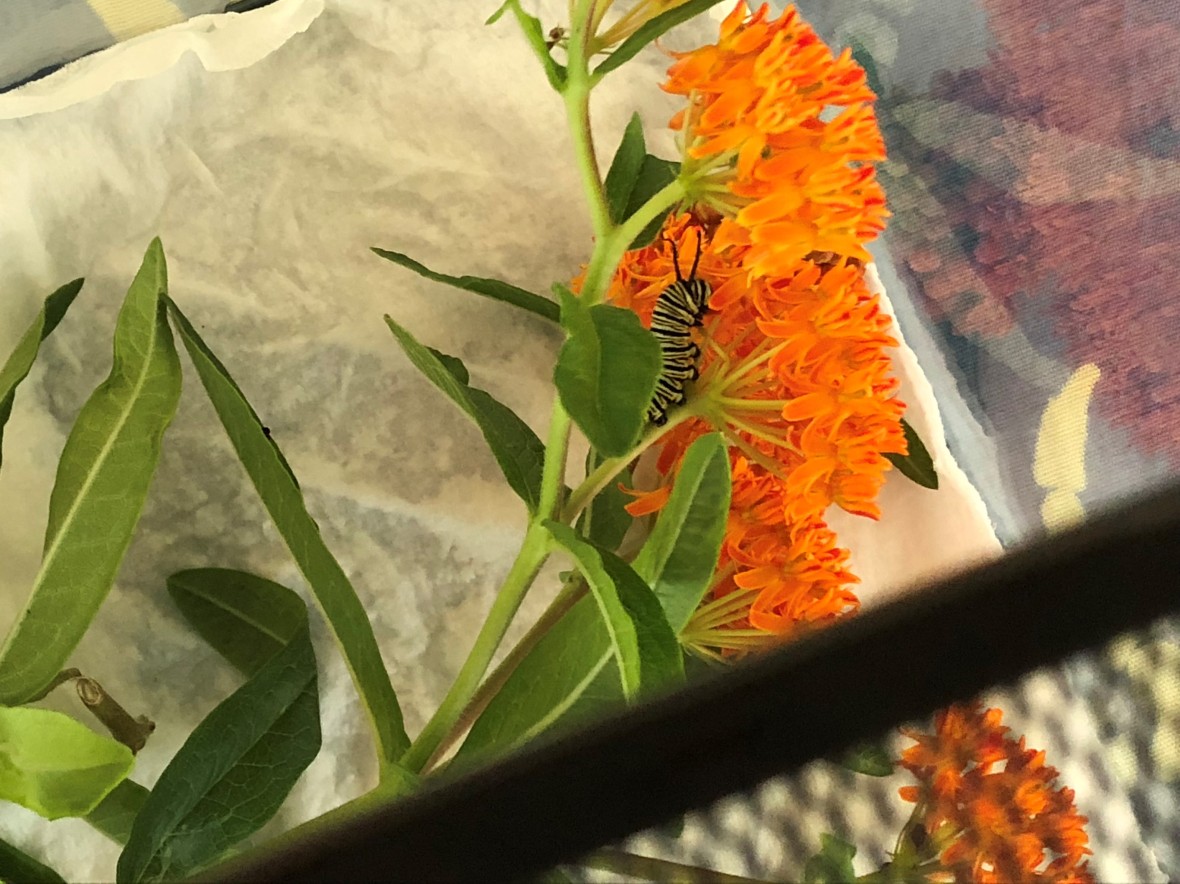 We brought in four caterpillars that we found on our Butterflyweed (Asclepias tuberosa). For this first effort we used an old-fashioned glass terrarium. We found out later that a mesh terrarium works better, so we’ll use that the next time. They’re pretty inexpensive.

It takes up to two weeks for Monarch caterpillars to turn themselves into chrysalids, and in that time they generate massive quantities of caterpillar poop, also known as frass. It’s important to keep the terrarium clean, which means getting rid of the frass each day. We used a lining of moist paper towels, which made cleaning a little easier. You also have to add fresh Milkweed stems every day, so that the caterpillars don’t run out of food.

Losing two of the caterpillars was disappointing. Still, 50% is better than 5%.

It takes 10-14 days for an adult Monarch to emerge from the chrysalis. Judy and I had to travel for our jobs just as we were reaching the critical point. Fortunately my neighbor Matt and his 5-year old daughter Julia were willing to check the chrysalids ever morning and evening. Such good neighbors!

Sure enough, the day before I returned Matt and Julia found an adult Monarch fluttering around inside the terrarium. They took the terrarium outside, opened it up, and watched the Monarch take wing. Matt took a few pics with his phone and texted them to me. I was excited, though I also felt a bit like I had missed being present at the birth of my first child.

After leaving the terrarium the monarch spent a few minutes basking on the Smooth Hydrangea (Hydrangea arborescens).

The next afternoon I got home. I rushed to the terrarium and found an adult Monarch sitting on the glass floor of his temporary home. I placed my finger near his head, and he crawled right on. New adults take up to a day to dry out their wings and otherwise acclimate to their new life stage. I wasn’t completely sure this guy was ready to take off.

Despite this, I carried him outside. A few steps beyond the door and away he went, landing on a nearby Spicebush (Lindera benzoin).

This post is not meant to be a guide to raising Monarchs indoors. For that you should check a reputable source, like Save Our Monarchs.

Having done this once, we are eager to try again. Unfortunately, we’re not finding any caterpillars in the garden, though there are always a few adults around. I’m optimistic that we’ll find a few before the next migration has finished passing  through this area.

Let’s close with a little Monarch caterpillar video that Judy took. Until next time, think about places where you can plant more Milkweed for the Monarchs.