Lilacs And Other Flowering Shrubs Of May

There are certain shrubs and small trees whose flowers symbolize the peak of spring.

The Common Lilac (Syringa vulgaris), is certainly one of these. Though I was somewhat resistant to planting a Lilac in our garden. It’s not native, and except for that brief period when it flowers, it just doesn’t do much.

But Judy longed for a Lilac, so I gave in and put one in the East Bed. I admit it is hard to resist that fragrance. In this spot the Lilac gets considerably less sun, and yet it blooms pretty well. Although I would say it is a bit leggy, but maybe I need to improve my pruning technique. We have very little trouble with powdery mildew and other leaf diseases later in the summer. 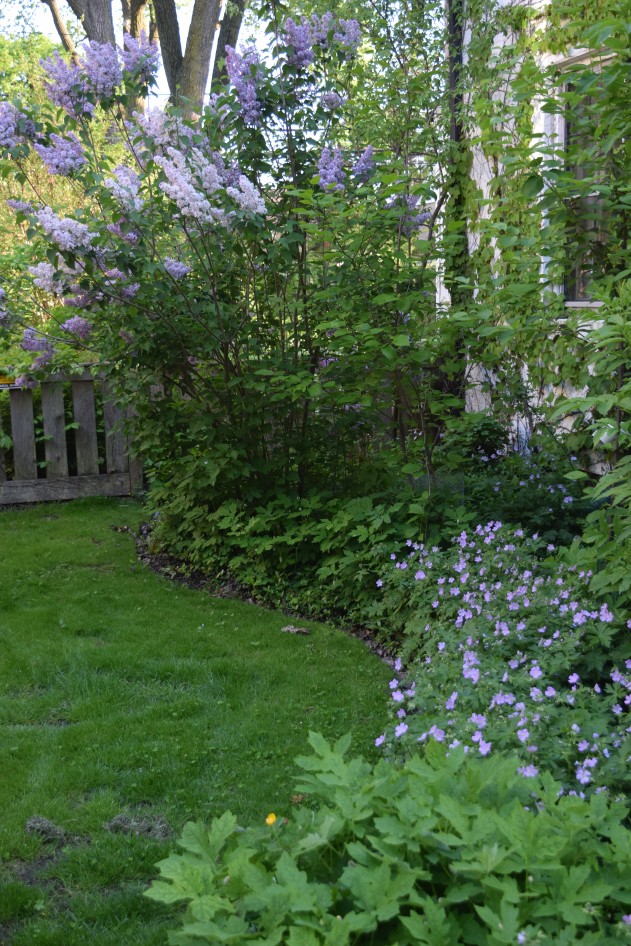 Here’s a longer shot that shows more of the East Bed, with lots of Wild Geranium (Geranium maculatum) in bloom. Did I mention that I placed this shrub right by a window, forgetting of course that the window was painted shut?

I really prefer the plain old Common Lilacs. The whole idea of reblooming Lilacs seems wrong, especially the varieties sold under the label Bloomerang. In my opinion they should be banned for the name alone.

Crabapples also bloom in May. I love Crabapples. The flowers, the colorful fruit – plus it has excellent wildlife value. Here’s ‘Donald Wyman’ blooming in the  front garden.

My mother used to make Crabapple jelly, which is another pleasant association. Birds also tend to love Crabapples, and not just for the fruit. Some birds eat the flowers and buds. Insects are drawn to the blooms, and birds eat the insects.

In the back garden we have a ‘Golden Raindrops’ Crabapple. The name derives from the very small, yellow fruits. The flowers of this Crab are subtly different from ‘Donald Wyman’. I planted it in the back garden about three years ago (it’s supposed to be fairly shade tolerant). It’s put on a good amount of growth but last year it didn’t have any flowers for some reason. This year there were flowers, but they were kind of sparse. 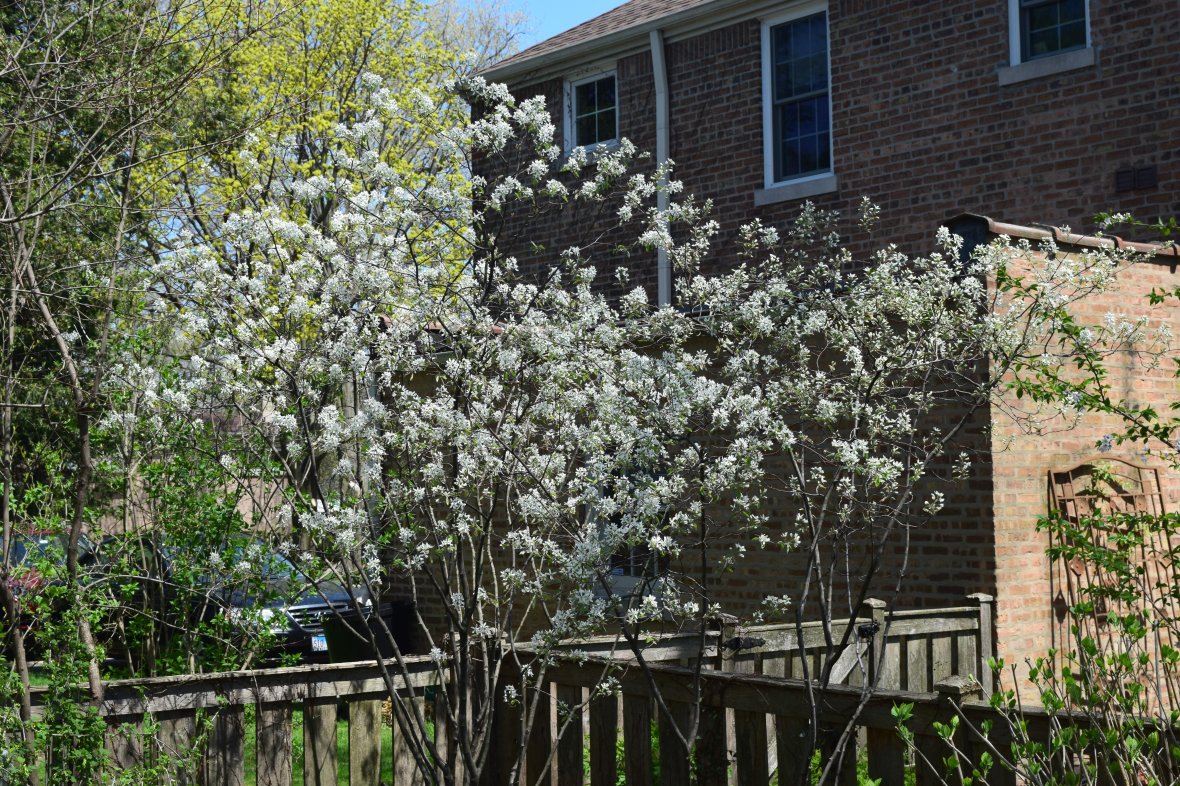 Serviceberry (Amelanchier x grandiflora ‘Autumn Brilliance’ is a shrub that normally blooms in April, but this year it was delayed until May. 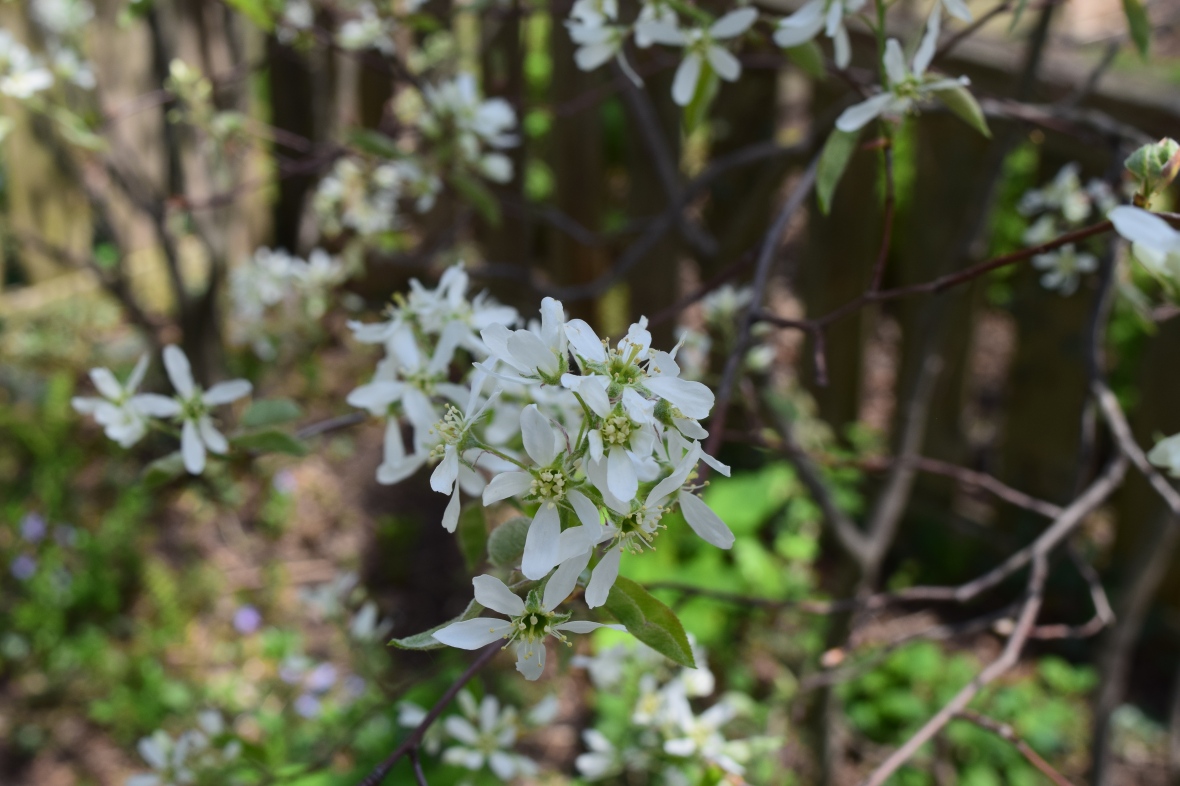 Serviceberry flowers open before the shrub leafs out. The two Serviceberries in this corner of the back garden have become a lot more vigorous since an adjacent Crabapple in the neighbor’s yard was taken down.

Oh, and I have to mention one more shrub which has left me quite frustrated. This Korean Spice Viburnum (Viburnum carlessii ‘Compactum’) was planted three years ago, and this summer it had only 2 flower clusters! And one of those was bitten off by birds! Grrr!

But enough about me.  Which are your favorite shrubs or small trees for May blooms?

49 Comments on “Lilacs And Other Flowering Shrubs Of May”