By the first week of June our garden has taken on a more tranquil character. The orange, red, and yellow exuberance of the tulips, narcissi, and poppies has spent itself. Now the garden is full of the bulky greens of summer-blooming plants not yet ready to put on their show.

Blue flowers, tranquil and comforting, seem to predominate right now. Notable among these are the Wild Blue Indigo (Baptisia australis).

You can see from both the leaves and flowers that this is a member of the Pea Family (Fabaceae). (A friend of mine suggested that in a just world Fabaceae should mean the Fabulous or Fabio Family.) Our Baptisia seems to be shorter than usual this year – I wonder if that is a result of the cold spring weather.

Last fall I planted two ‘Betty Corning’ Clematis, to provide some color balance while scrambling through the Mexican Sunflower (Tithonia rotundifolia) with its intense orange flowers.One of the very first ‘Betty Corning’ flowers is above. They are supposed to bloom through September, so I am looking forward to many more.

A complication with my plan is that ‘Betty Corning’ is already about four feet tall, while the Tithonia and other tall plants that are supposed to provide ‘Betty’ with support won’t catch up for at least another couple of weeks. In the meantime, ‘Betty’ is filling in around tomato cages.

Speaking of scrambling, I think ‘Rozanne’ would be justified in selling itself as a climbing Geranium. It clambers up and through other plants with apparent ease, then surprises us with these sweet five-petaled flowers in unexpected places.

Here’s a better picture of ‘Rozanne’s’ flowers. The earlier one has too much light (I took the pictures for this post instead of Judy). 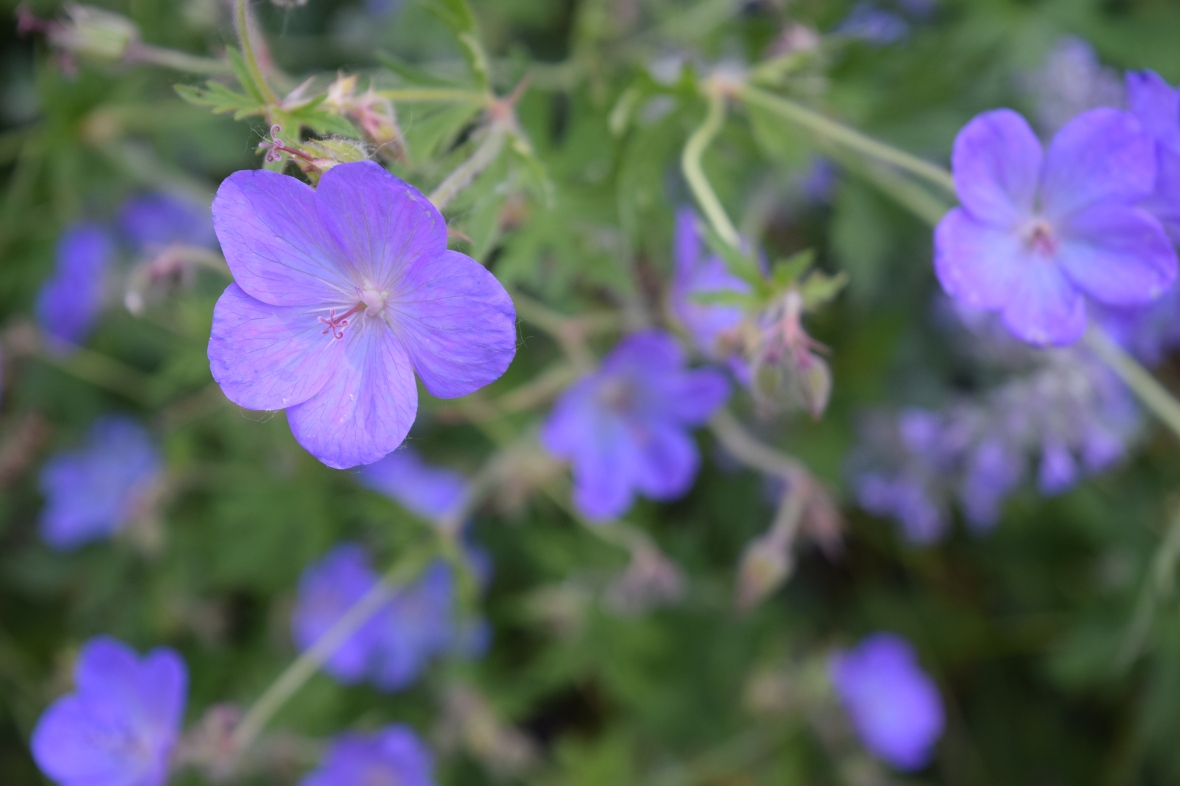 Here’s our other blue-flowered hardy Geranium, ‘Johnson’s Blue’. Very floriferous, though a much shorter bloom season than ‘Rozanne’. 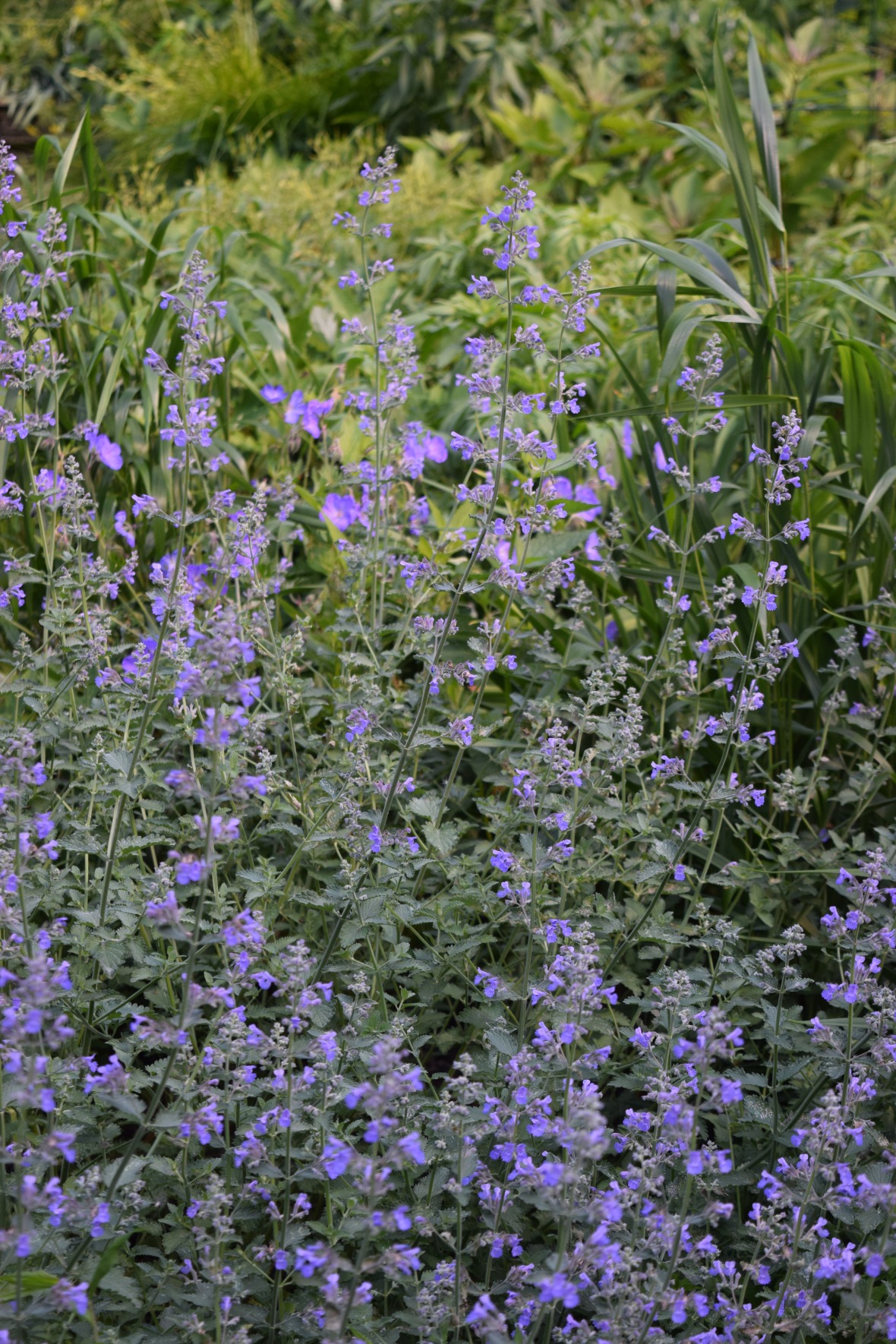 This year there are a couple of ‘Six Hills Giant’ Nepeta in the Driveway Border.

I’m very happy with this plant, which grows over 3′ high. It makes a cloud of tiny blue-violet flowers.

There are also several Salvias – ‘May Night’, ‘Blue Hill’, and ‘Caradonna’ above. More purple than blue, but close enough.

Moving on to the Sidewalk Border, we find the Bluestar (Amsonia tabernaemontana) in flower. 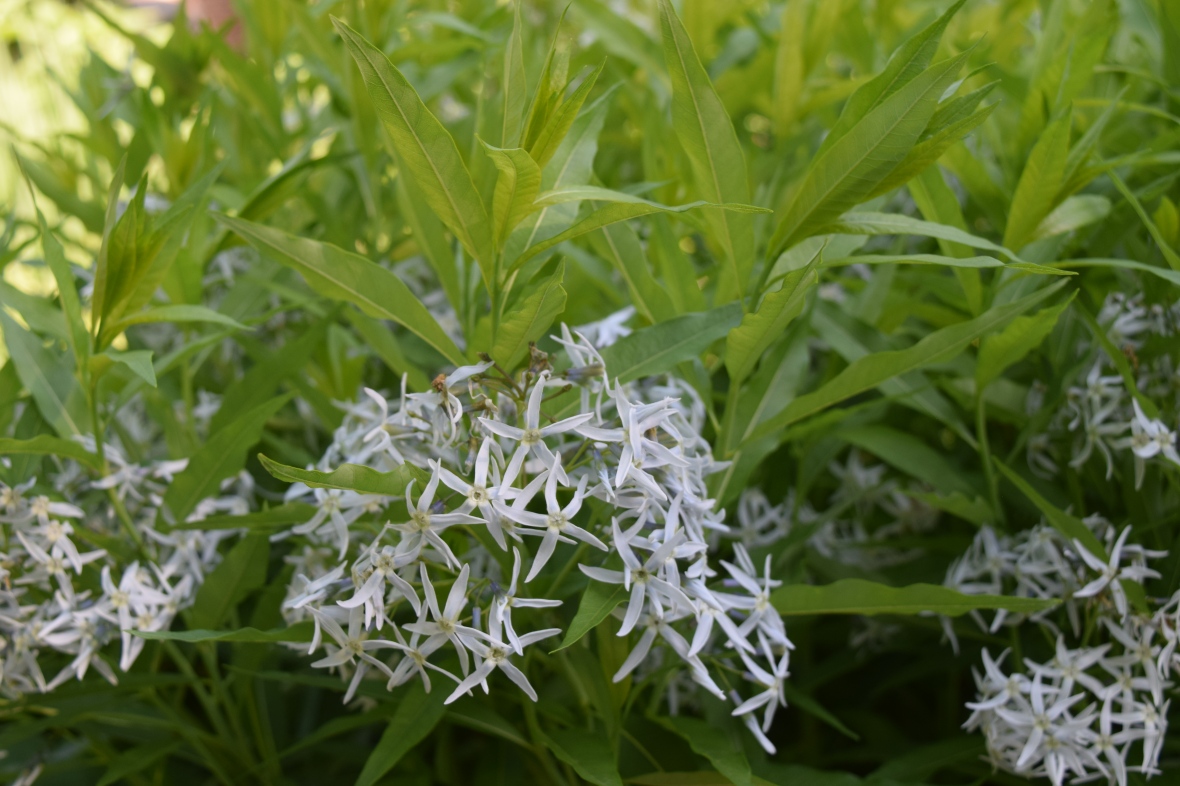 Like the Baptisia, it seems shorter than usual this year. I’m still happy to see it make its appearance.

While the Amsonia in the Sidewalk Border is the straight species, in the back we have the hybrid Amsonia ‘Blue Ice’, pictured above in front of our patch of ‘Purple Sensation’ Allium. ‘Blue Ice’ is far more compact than the species. I should confess that this picture was taken on May 29th – by now the purple and blue is pretty much all green. 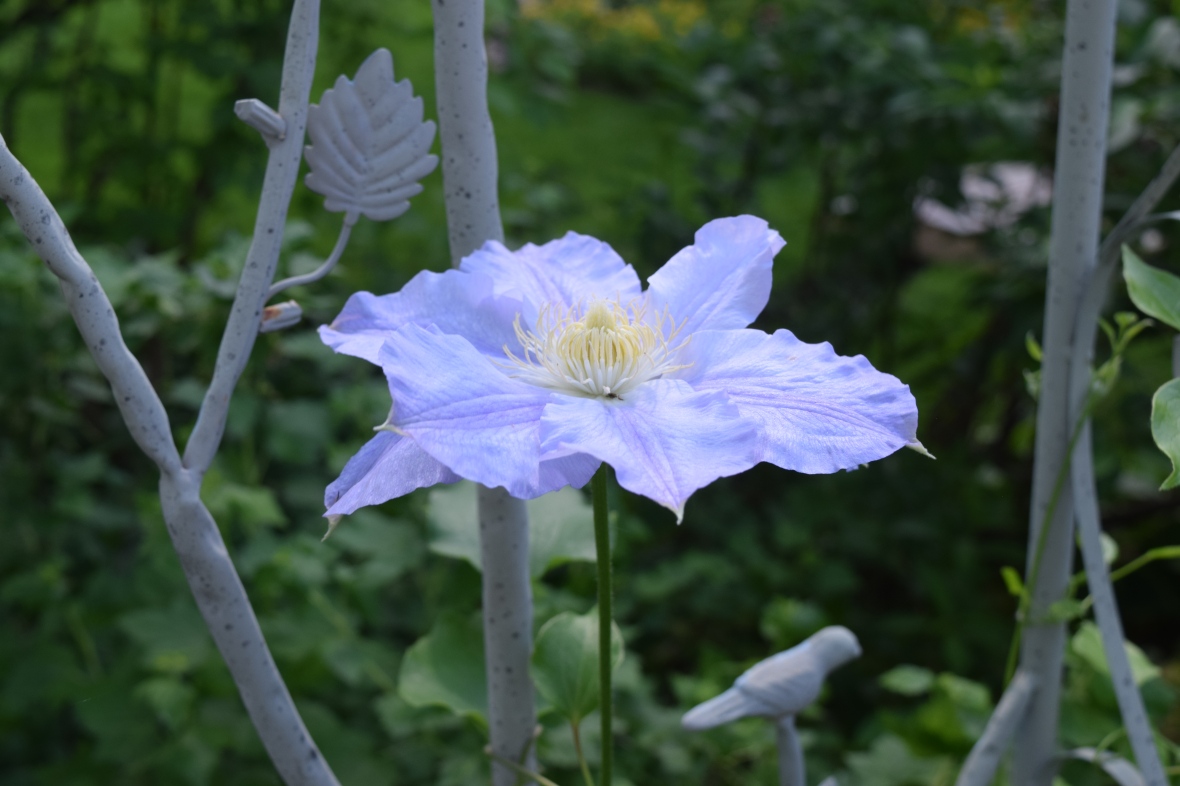 Also in the back garden, Clematis ‘Ice Blue’ is not to be confused with ‘Blue Ice’. ‘Ice Blue’ is growing up the arbor opposite the rose ‘Darlow’s Enigma’. In my experience so far, ‘Ice Blue’ flowers with restraint. However, the blooms it does produce are huge (at least 6″) and a wonderful pale blue. ‘Ice Blue’ grows to only about 6′ tall.

Not all the flowers in our garden right now are blue, and we’ll take a look at the other colors (mostly white or close to it) in the next post.

Are any blue flowers growing in your garden right now?