Blooms Beneath the Oaks

One day we drove to Descanso Gardens, located about an hour north of downtown Los Angeles. I was interested mostly in seeing the Camellia collection and the forest of Coast Live Oaks (Quercus agrifolia). Conveniently, the two occupy the same space.

Descanso Gardens was once the country home of a California businessman and Camellia lover. The gardens were opened to the public in 1950. 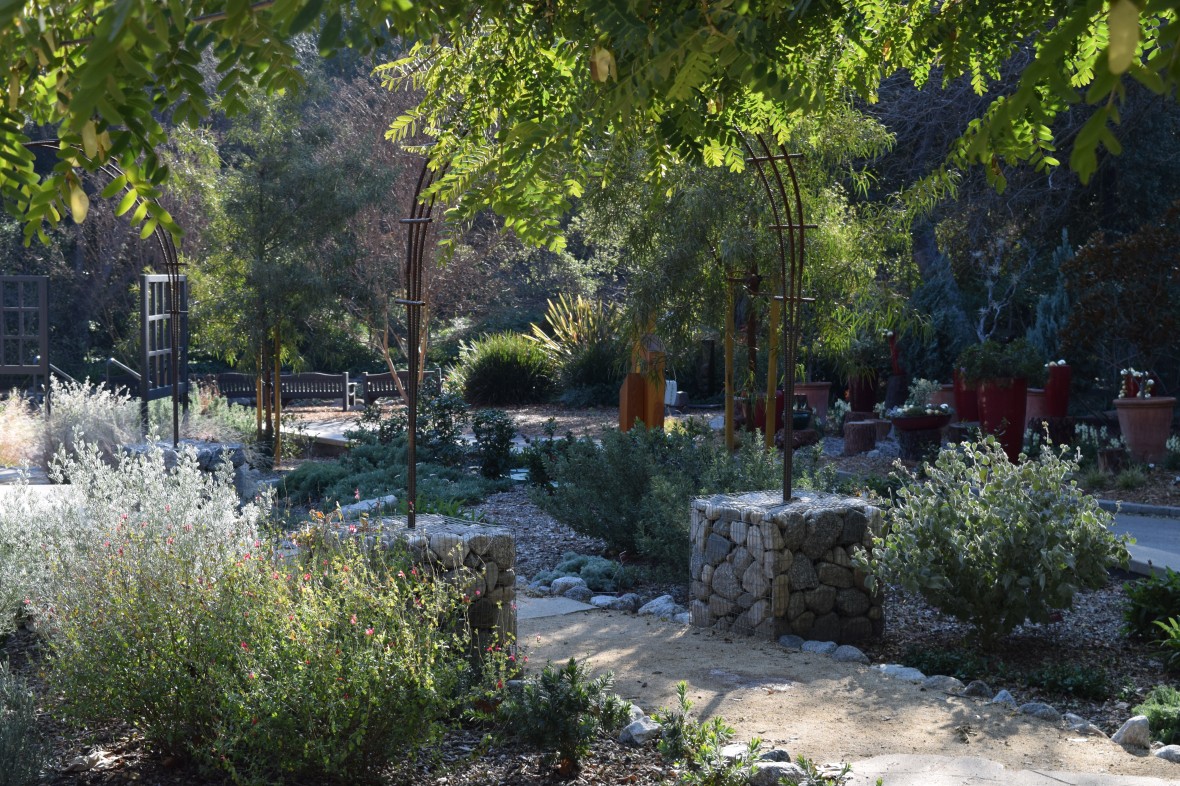 Formal gardens and preserved natural areas, a kid-sized railroad, and a 22-room mansion built in the late 1930s are all available for exploration.

We stopped at a small lake that had a bird observation deck.

There were quite a few aquatic birds, but the light was such that it was hard to get any good photos. Anybody have an idea who this fellow is?

Judy, who grew up in the Buckeye State, refused to believe that this tree with its smooth white bark is also a Buckeye. But there it is on the sign: Aesculus californica, the same genus as Ohio Buckeye (Aesculus glabra).

Along the path there were places where the vista opened up to reveal the mountains of the Angeles National Forest to the west. 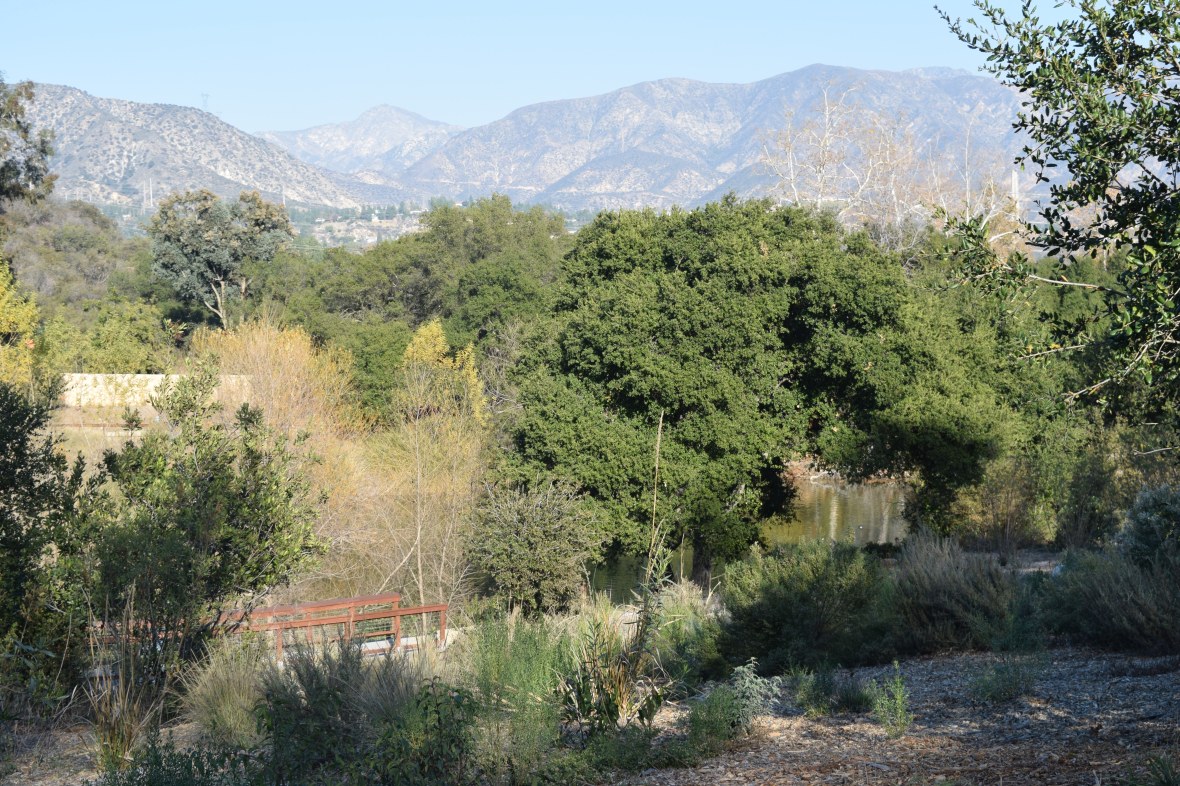 I guess this is some kind of Prickly Pear (Opuntia). The pads make think of hands in mittens. 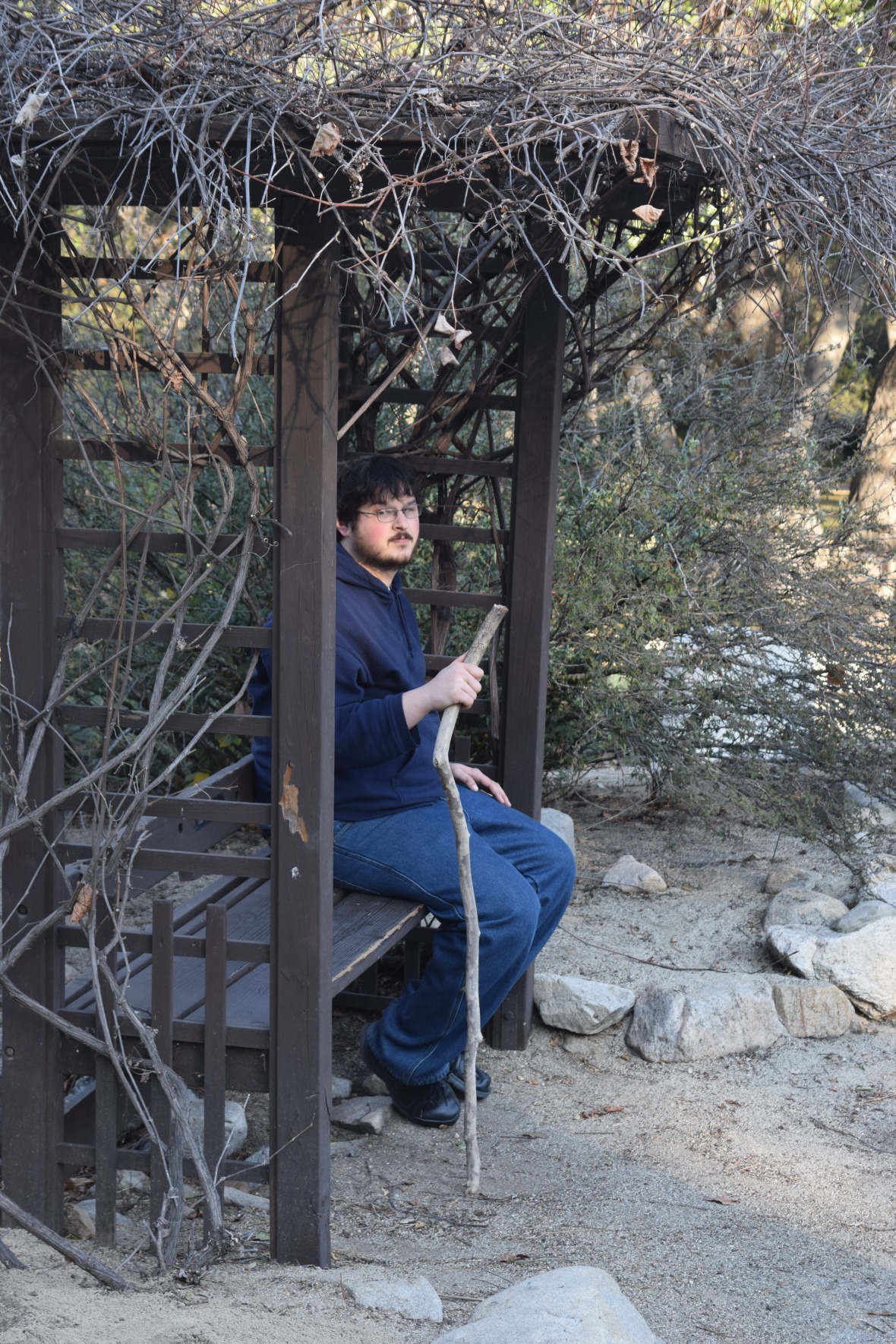 Here’s David with an improvised walking stick, submitting to the indignity of being photographed. 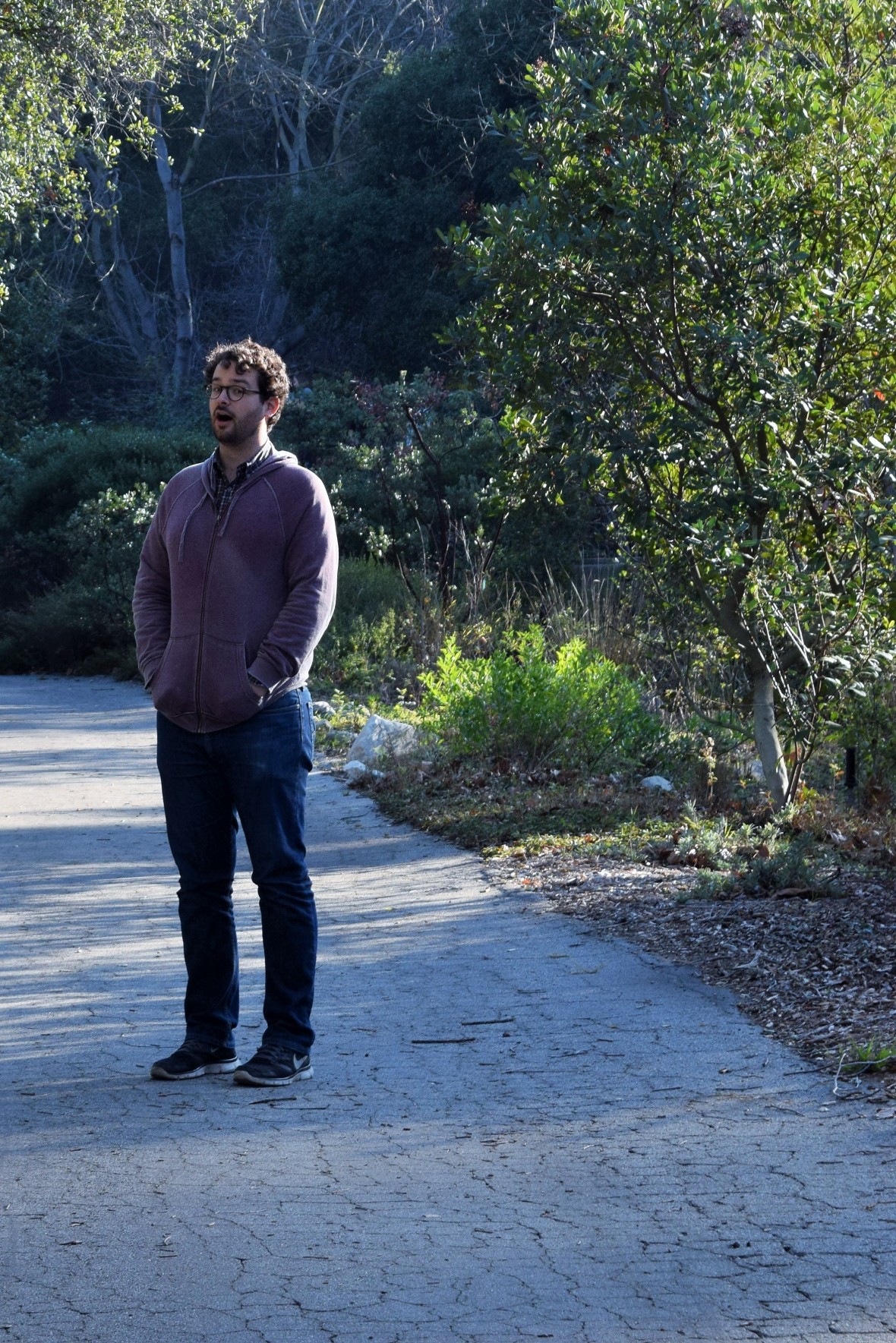 Daniel affecting a look of amazement, purporting to demonstrate how fascinated he is by his surroundings.

Eventually we came to the Oak Forest. Forests of Coast Live Oaks were once a common landscape in Southern California. Their bending, twisting shapes suggested to me that they were stretching or reaching for something.

Some of the Oaks at Descanso are hundreds of years old. These are evergreen Oaks that support many other species – birds and insects, mammals and fungi, etc. 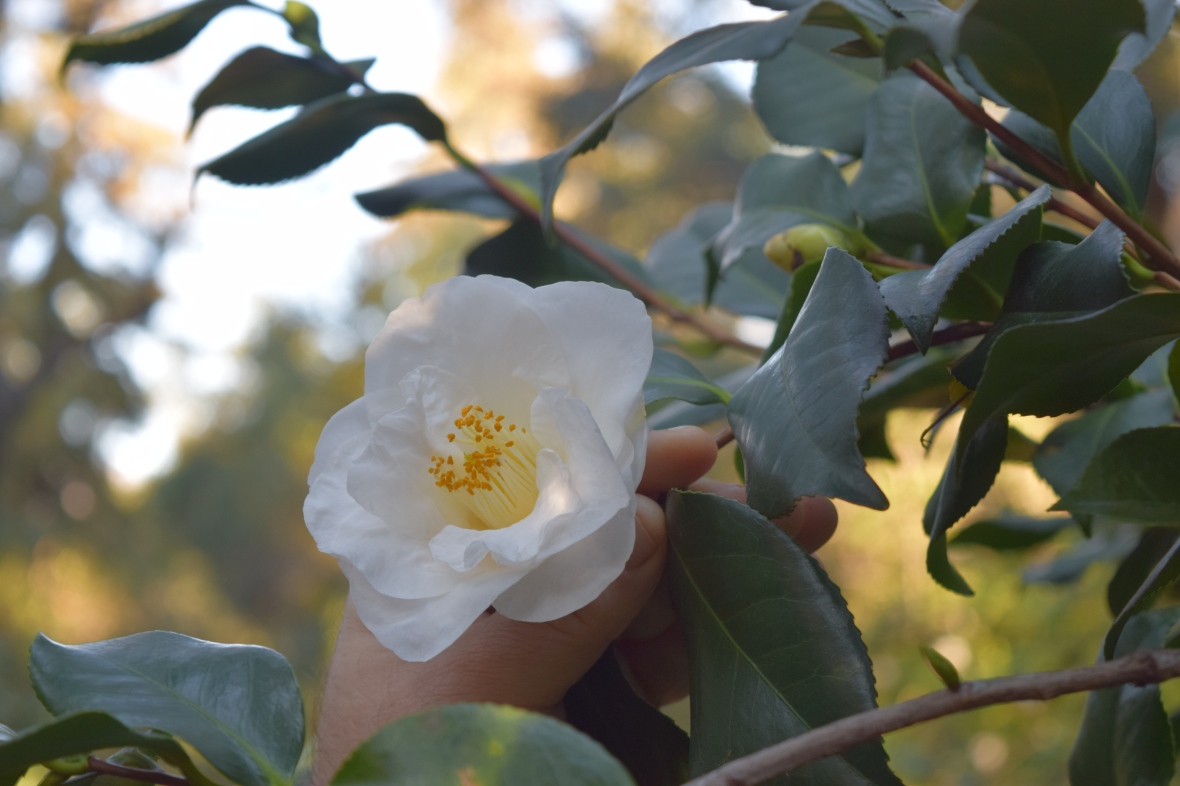 Thousands of Camelias are planted as an understory in this Oak forest. Sorry, but I didn’t even try to keep track of all the species and varieties. I’ll just say that there were many.

In late December we were just at the very beginning of the Camelia blooming season, so there were far more buds than blooms.

A large share of the Camellia collection at Descanso was obtained in 1942, when the owner at the time bought out all the stock of a successful Camellia nursery owned by Japanese-Americans. The owners were forced to sell as they faced deportation to internment camps as a result of the anti-Japanese hysteria of World War II. 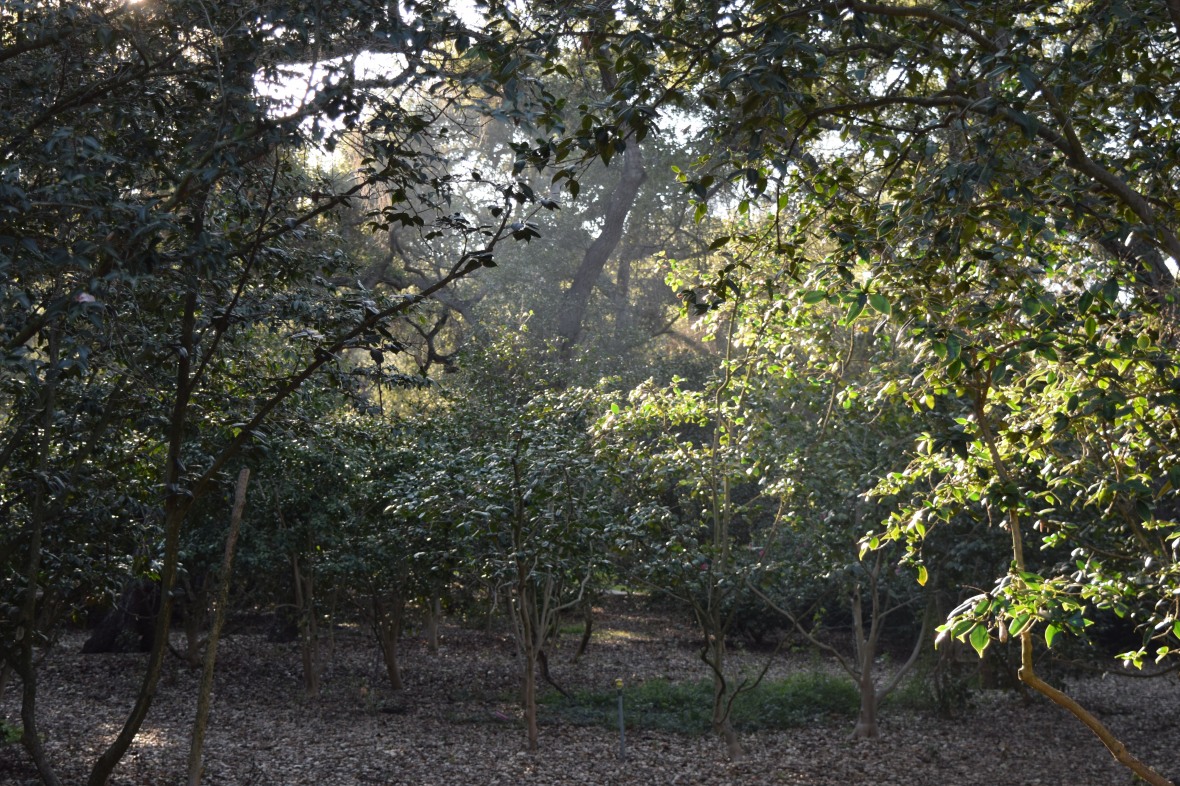 In the dappled shade of the Oak forest it seemed cool and misty, even as the surrounding area was dry and arid.

I liked this one, rose speckled with white.

This one also. An unusual shape, I think.

At the edge of the Oak Forest we came upon this patch of ferns. Most of them seemed to have an unusually rigid habit for ferns, the leaflets not as soft. Anybody know what species this is? 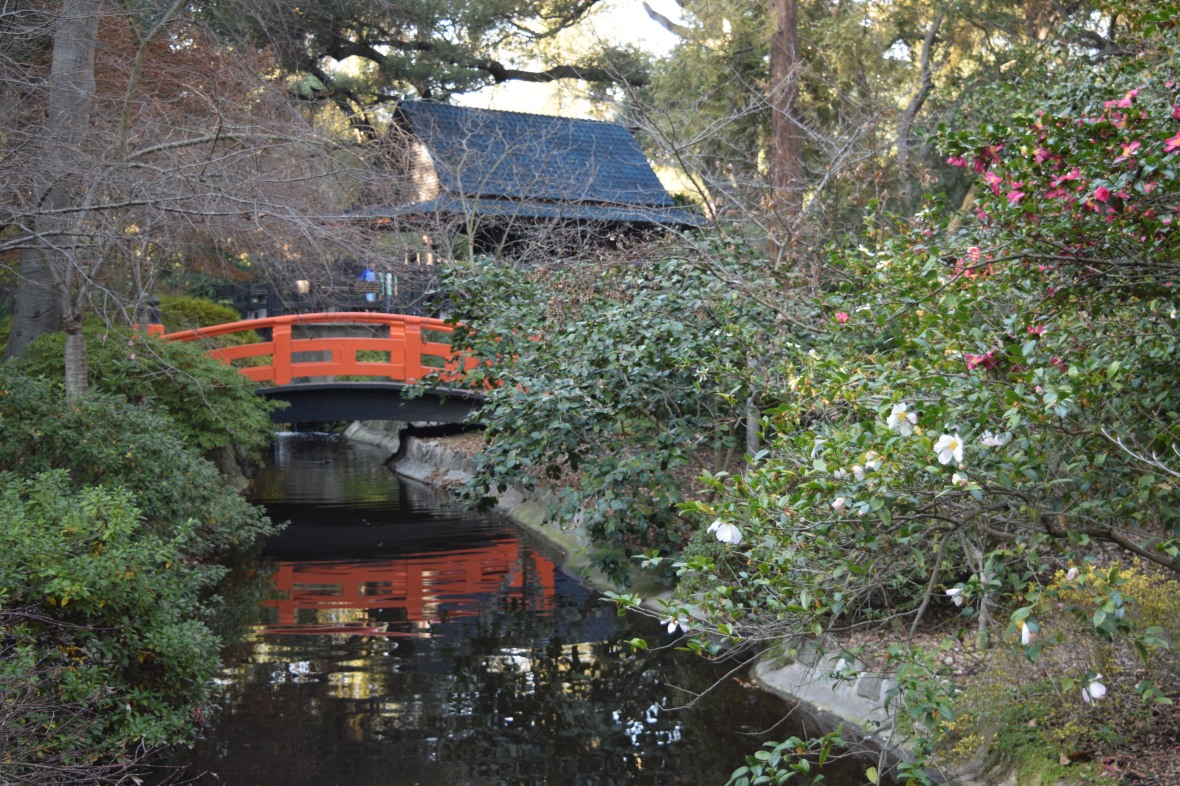 We walked along the edge of Descanso’s Japanese Garden. More Camellias are planted along the water here.

On the way out we noticed this nifty wreath made with live succulents.

Alright, so I think there is material for just one more post on last year’s California trip. In the meantime, here’s a question: what is your favorite kind of Oak?

58 Comments on “Blooms Beneath the Oaks”