Posted on November 2, 2015 by gardeninacity

The Longwood Gardens Conservatory is full of rewarding experiences for plant lovers. Like the rest of Longwood, it is so big it’s almost overwhelming. There are 5,500 kinds of plants housed in over four acres under glass. The scale, plants, and design combine to create the feel of an alternative reality.

We got to a majority but not all of its 20 indoor gardens.

The first gardens we saw after entering were the East Conservatory and the Exhibition Hall. Everywhere there were signs of the annual Chrysanthemum Festival that was just beginning. I did find these spidery yellow mums appealing.

However, there were more blooming mums outside the Conservatory than there were inside. Inside, many of the stars of the Chrysanthemum Festival were not quite ready to strut their stuff. I wasn’t too disappointed, though, because I’m not really a big mum enthusiast. 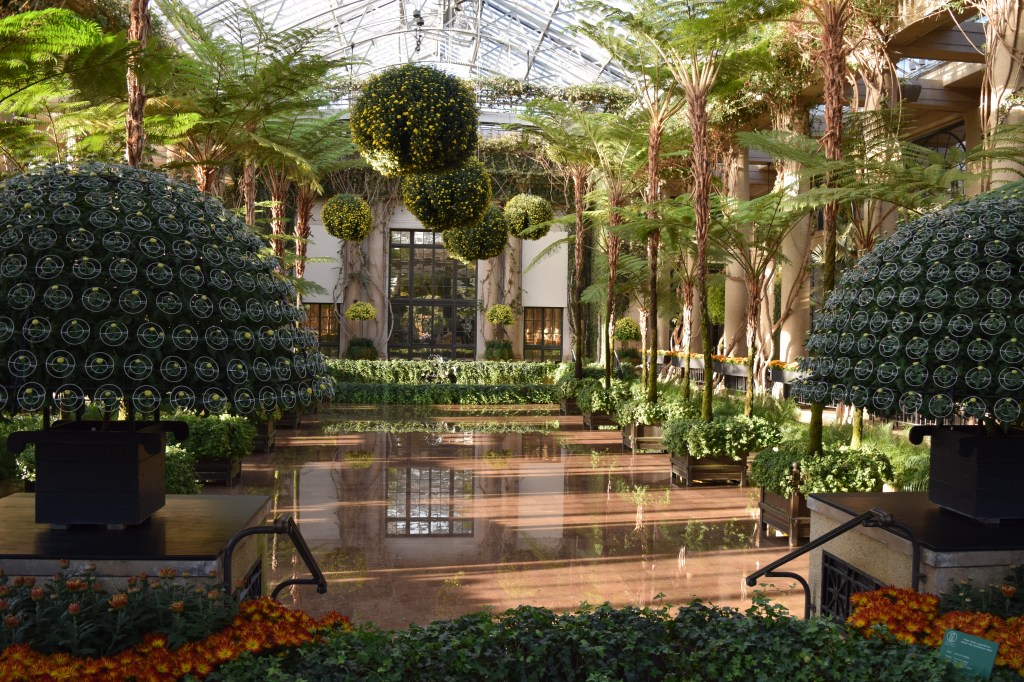 The Exhibition Hall has a kind of late Victorian feel to it. There are marble pillars and a sunken marble floor covered with a few inches of water to provide reflections. It seems like a place suited to upper class soirees, and in fact Pierre du Pont used this area for parties and dances.

This area has plenty of water features. I liked these rather sinister-looking birds spouting into the pool below.

The moving water kept a steady murmuring sound in the background that was really quite soothing.

There are mums that I like, but the flowers above are a good example of what I don’t appreciate about Chrysanthemums. Honestly, they remind me of either purple poodles or those Sesame Street aliens with the big mouths.

Is it just me, or do you see what I’m getting at?

Anyhow, let’s move on. The Acacia Passage is a very cool space. Those are actually the branches and leaves of Acacia leprosa trees hanging down from above, creating what feels like a series of feathery curtains for the visitor to pass through. Abutilon of some kind are in the hanging baskets.

I very much liked the Mediterranean Garden, which included Pelargoniums, Aloes, Blood Orange, various Euphorbias, Climbing Lilies, and something called Jutta’s Botterboom (which is closely related to Jutta’s Botterbing).

There was also a banana and plantain garden. I show this because it provided me with yet another opportunity to point out to Judy that bananas are herbaceous plants, NOT trees. There was actually a sign which explained this quite clearly. This is a family argument we have been having for literally over 20 years (the kids are on her side). Once again, she refused to acknowledge the evidence.

The Silver Garden was one of the most striking spaces in the Conservatory. I loved how they combined stone with low-growing plants of different textures. 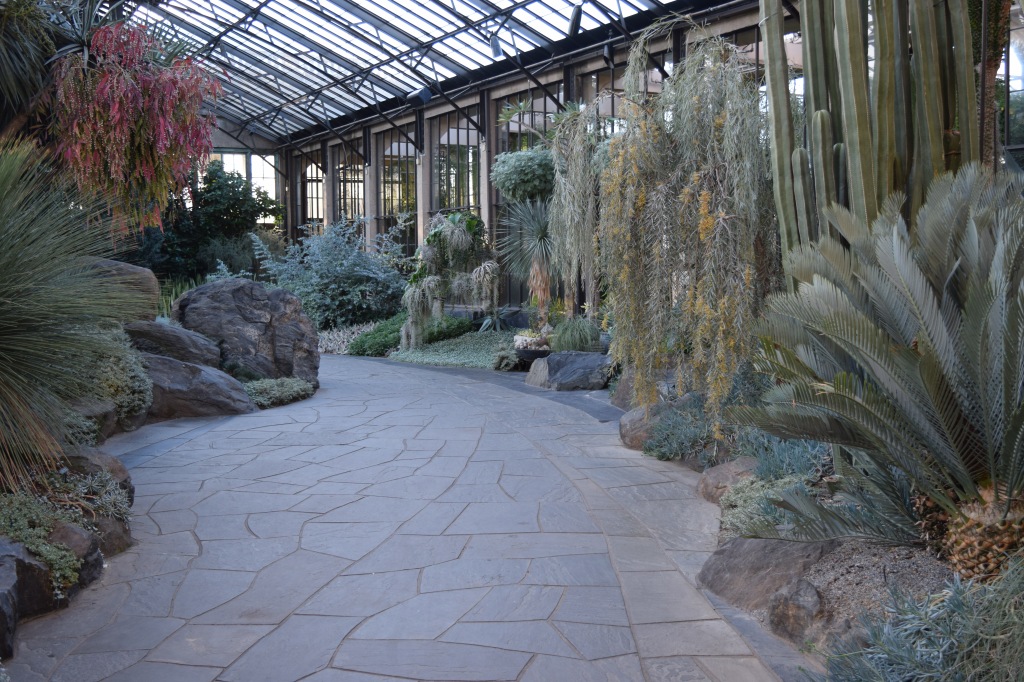 Like the Mediterranean Garden, the Silver Garden was filled with plants from arid climates around the world. 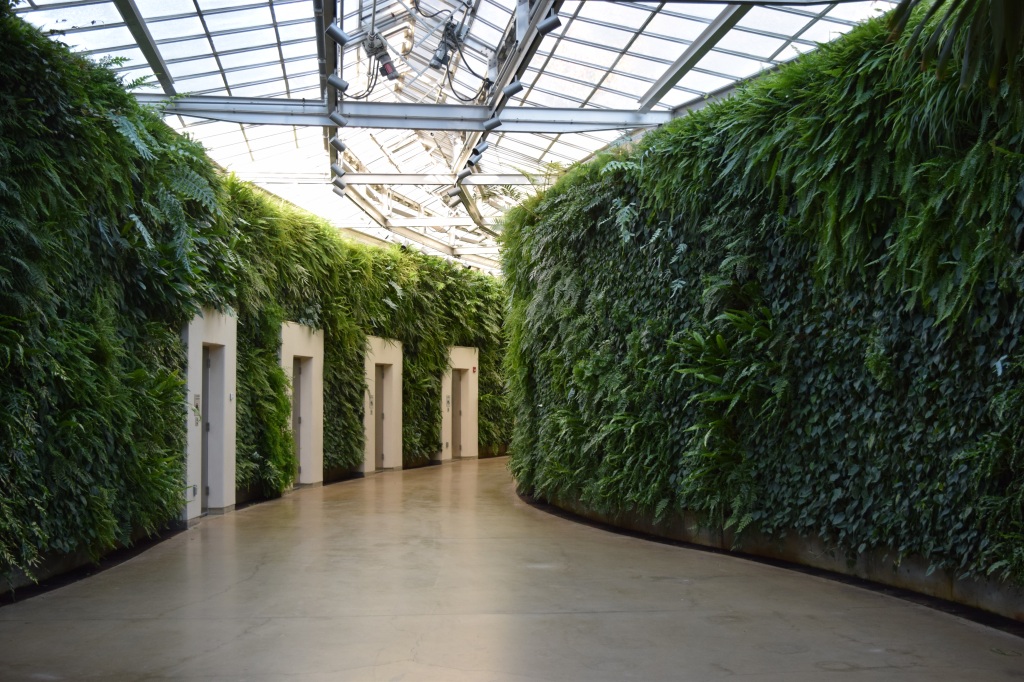 We saw one of the most interesting parts of the Conservatory only because I needed to go to the bathroom. The bathroom, we discovered, was located in the Green Wall, a vertical garden 14′ tall and 300′ long that includes about 30 different kinds of ferns.

There is also an aquatic plant display in a courtyard surrounded by the Conservatory. 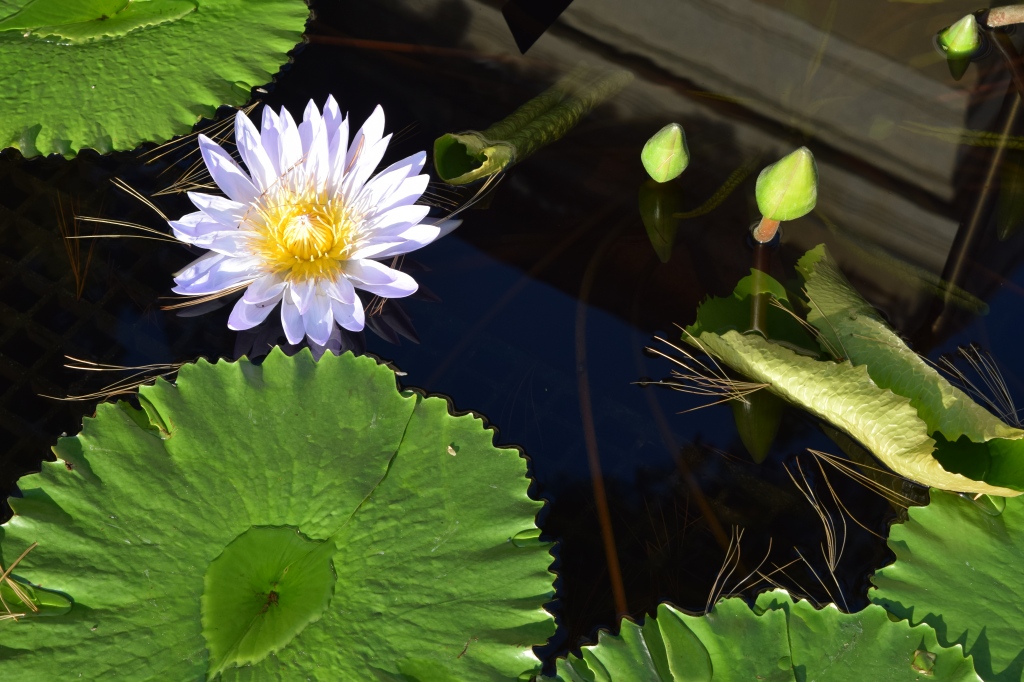 The display was past its peak, but there were still quite a few aquatic plants in bloom. 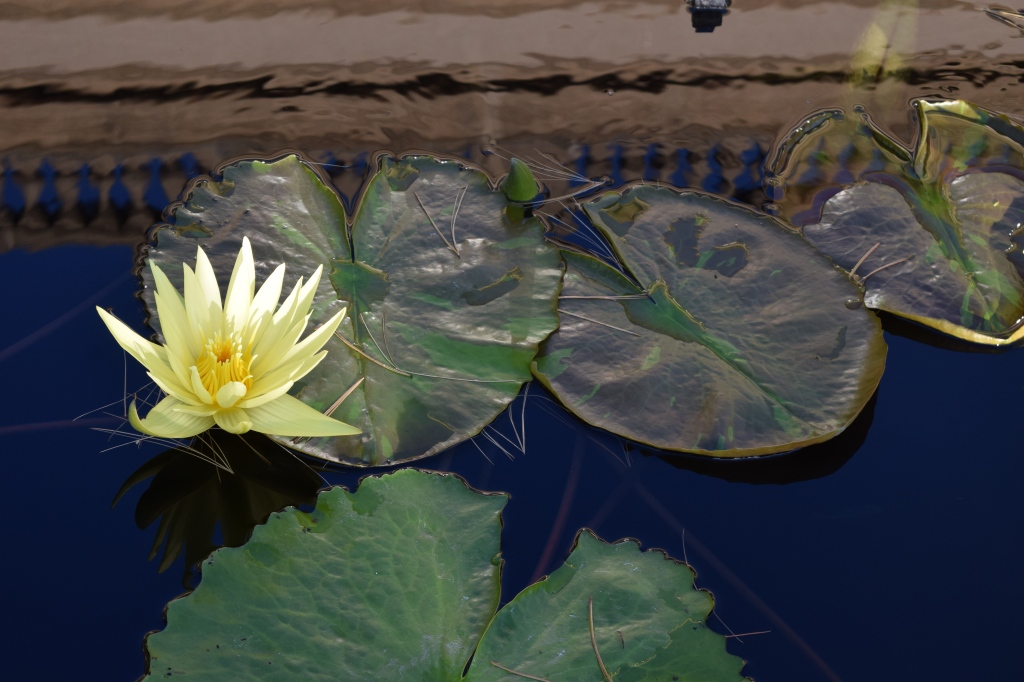 According to one sign, black ink is added to the water to display the plants to better advantage.

Something called Water Platter (Victoria cruziana and V. amazonica), looked as if it could be an aquatic version of the plant from Little Shop of Horrors. 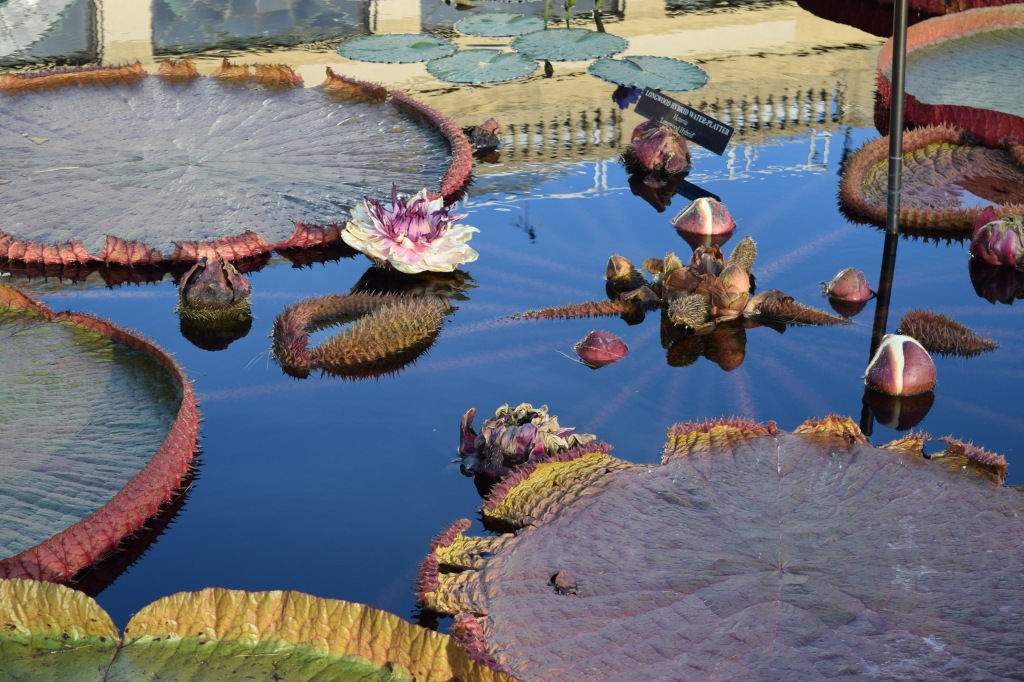 The huge circular leaves are surrounded by a sort of wall with nasty-looking thorns. To my mind, the flowers are suggestive of mature artichokes. Fascinating, but rather ugly. 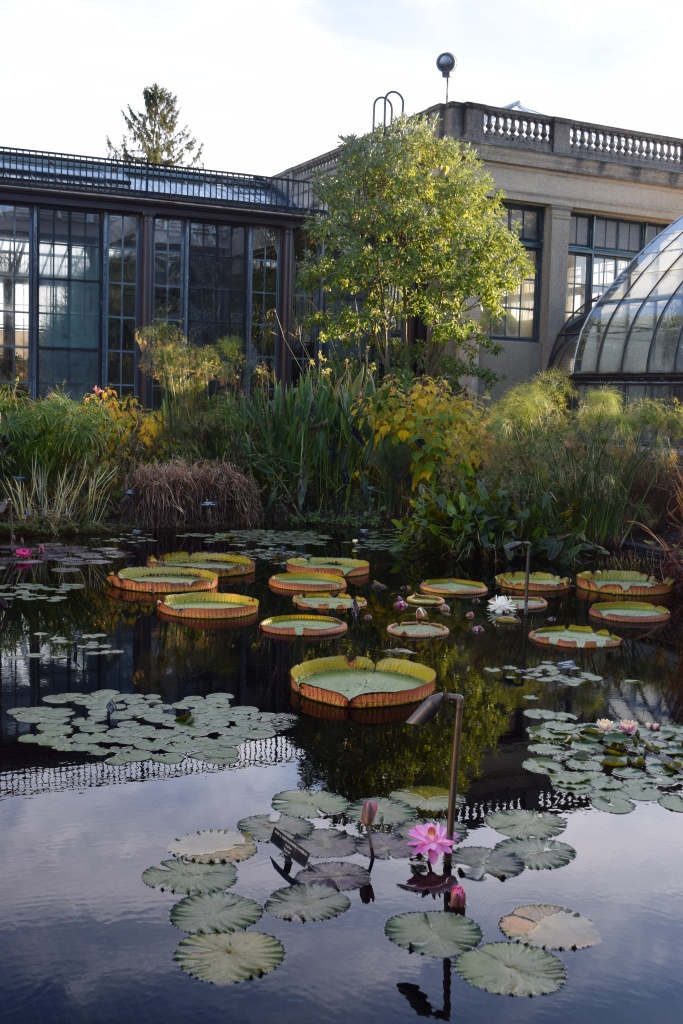 The Longwood Conservatory is an outstanding place to be enchanted and stimulated (and occasionally repelled) by what the plant world has to offer. Judy and I can enjoy conservatories, but we generally don’t find them to be exciting. Longwood was an exception.

← Longwood Gardens in October, Part II: The Meadow Garden
The More Things Change (in The Garden), The More Fun I’m Having →

58 Comments on “Longwood Gardens in October, Part III – The Conservatory”