Longwood Gardens in October, Part I

Yesterday Judy and I returned from a visit with our friends Carol and David, who live outside Baltimore. On the last day of our visit Carol drove us the 90 minutes to Longwood Gardens in southeast Pennsylvania.

As we approached the visitor center I noticed some people planting bulbs. This is a sight that always gladdens my heart, though it did make me wonder if we were visiting a bit too late in the year.

At 1,077 acres, Longwood Gardens is absolutely huge. It started out as a farm and arboretum run by a family of farmer-botanists. Early in the last century it was purchased by the industrialist Pierre du Pont, an avid gardener. After du Pont’s death, Longwood was turned into a public garden operated by a private foundation.

I shouldn’t have worried about there being enough to see. In fact, there was so much that Judy took well over 300 photographs. In an attempt to do justice to this place, I think I’ll do at least three different posts: the first mainly on the Flower Garden Walk and adjoining areas, the second on the Meadow Garden, and the third on the Conservatory.

On the way to the Flower Garden Walk we walked along a row of absolutely huge Bald Cypress (Taxodium distichum). Longwood has many venerable trees, including some of the biggest specimens I have seen.

The Flower Garden Walk is a mostly old-fashioned rather formal garden. Not my usual thing, but I couldn’t resist the masses of color and mix of plants. The Walk itself is 600′ long.

Containers are filled with annuals, grasses, and conifers. And everywhere there was a mix of majestic evergreen and deciduous trees providing background and counterpoint.

Chrysanthemums were massed in many of the borders. Here they were mostly single-flowered and sweetly fragrant, which surprised me. 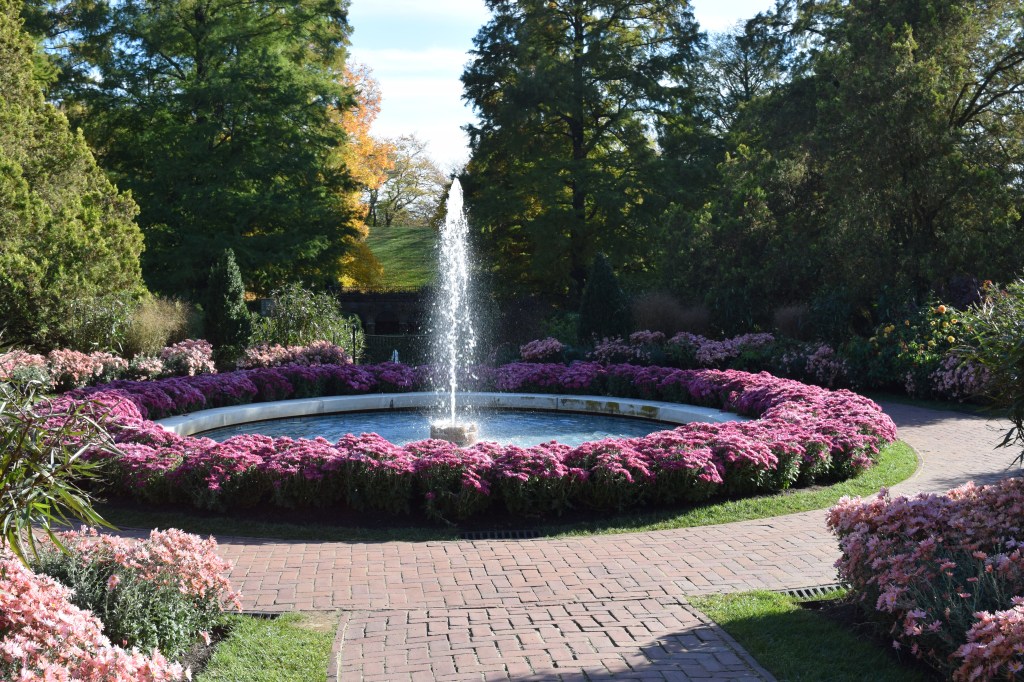 Old Mr. du Pont had a thing about fountains, a point we shall return to. 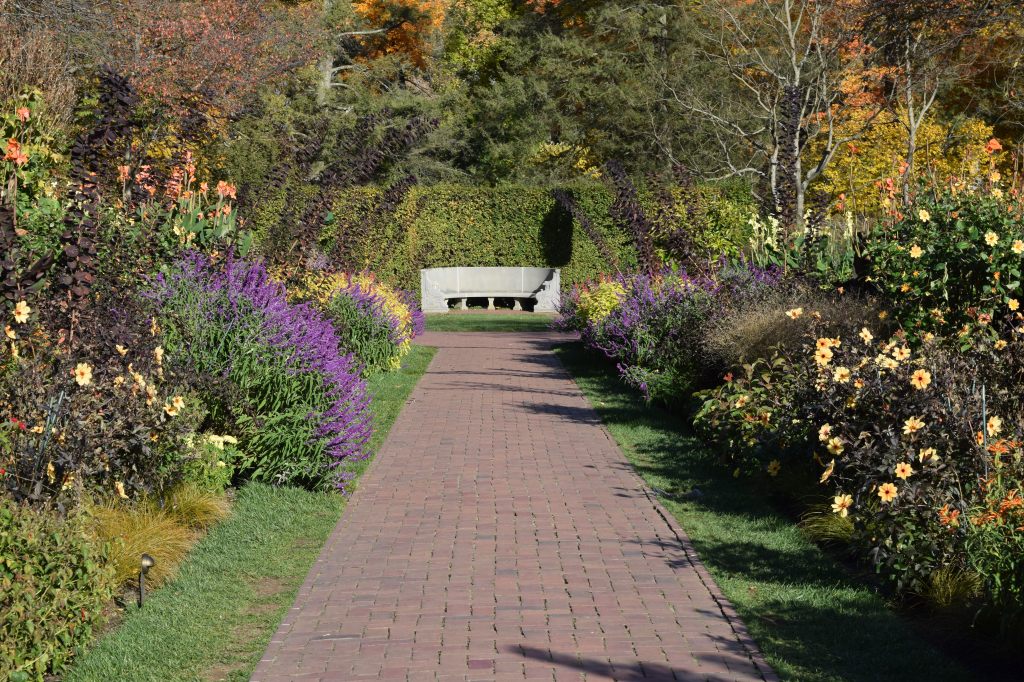 Other borders were full of Dahlias, Mexican Sage (Salvia leucantha), Pentas, and Cannas.

I am not such a New Perennial/Natural Garden/Native Plant enthusiast that I cannot be moved by masses of colorful annuals, especially when they reach such imposing heights and come in such stirring colors. 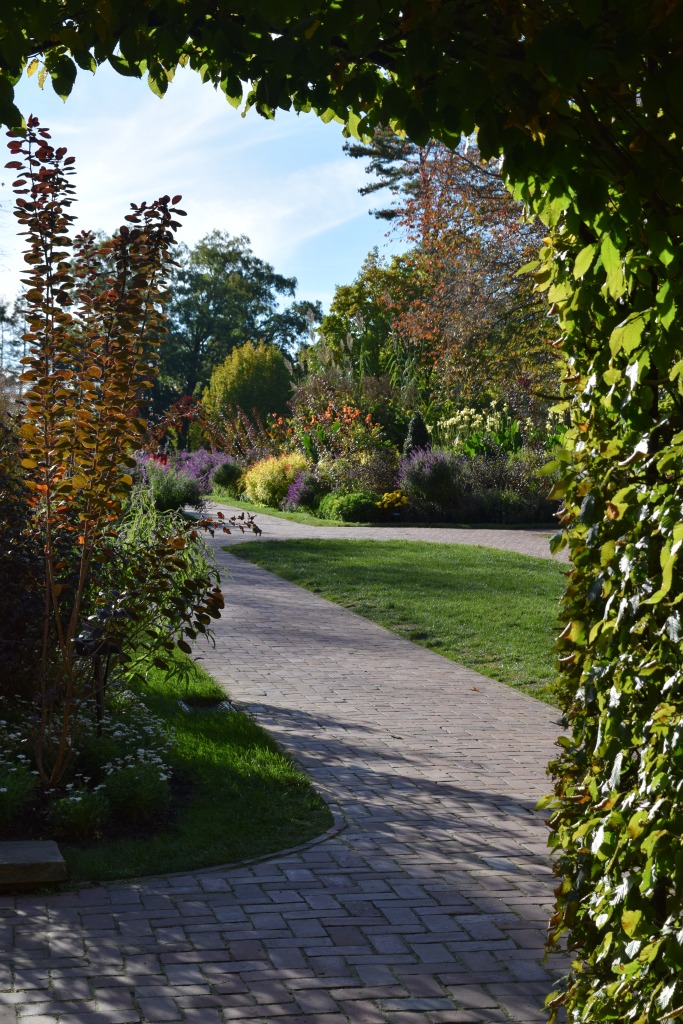 Looking out through an ivy-covered arbor at the Flower Gardem Walk. I like how they cut back the Smokebush (Cotinus obovatus) to just a few tall purple-leaved stems.

There is a Wisteria Garden I would dearly love to visit in May or June. There is a traditional Wisteria-covered arbor, but also several old Wisterias that are pruned like small trees leaning on tall metal poles.

The colors of Pierce’s Woods burst like fireworks above one of Longwood’s two lakes. 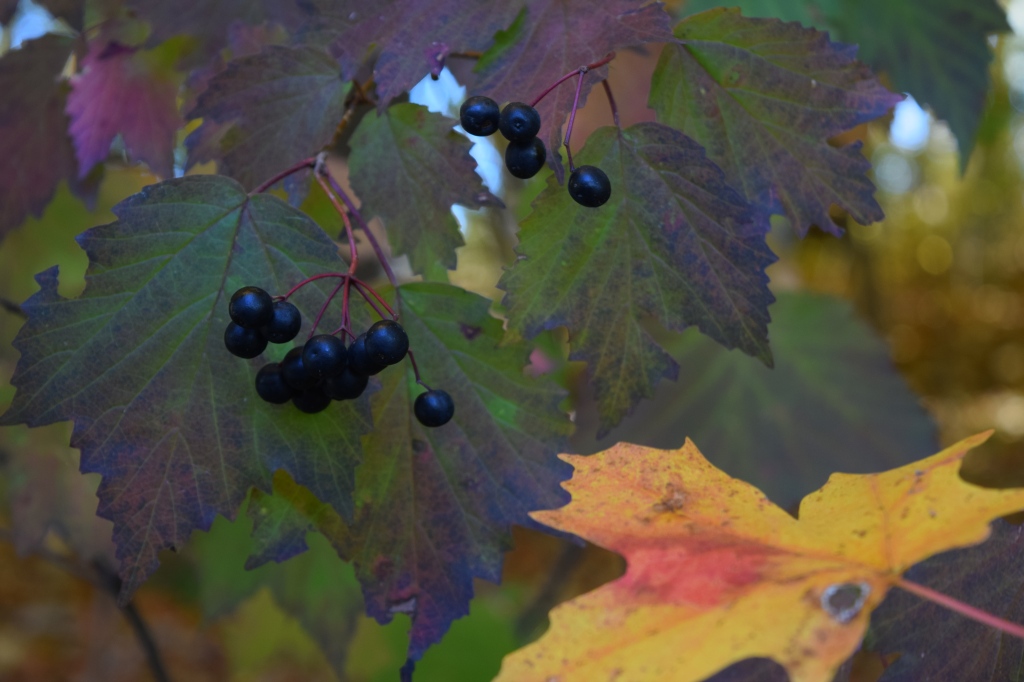 Many native shrubs and trees to be seen like this Mapleleaf Viburnum (Viburnum acerifolium).

Here’s the Peirce-du Pont house, which began as a farmhouse before du Pont turned it into his “country place”. I usually avoid going into the houses attached to gardens – who wants to look at a bunch of furniture? But Judy and Carol were determined, so I trudged along behind them.

Actually, the house now contains a small atrium, which is nice, and a modest museum on the history of Longwood. I also watched a short laudatory film about Pierre du Pont, who was portrayed as nothing less than a heroic paragon of virtue. No doubt the man loved his trees and flowers, and was a genuine philanthropist.

He was also arguably a victim of the social mores of his day. Du Pont married when he was 44, but had a long-term intimate relationship with his chauffeur, (a man 26 years his junior). This relationship could not be acknowledged by the du Pont clan, then or even now.

On the other hand, du Pont was something of a would-be Koch brother, though not as effective. In the 1930s he poured money into the American Liberty League, an organization that opposed the minimum wage, unemployment insurance, and child labor laws. When Franklin Roosevelt spoke of “malefactors of great wealth”, du Pont was one of the people he had in mind.

OK, enough politics. Leaving the house, we came to a wonderful model railroad. And it was free! At the Chicago Botanic Garden you have to pay an extra admission fee.

Look, Thomas the Tank Engine! My kids loved Thomas and his friends, as well as Mr. Conductor.

We went to Longwood’s outdoor theater to view the fountain show. I could have skipped this, but was once again overruled by Judy and Carol. The fountain show consisted of many jets of water rising and falling in time to a couple of John Phillip Sousa marches blasted through loudspeakers. The most entertaining part was a little girl, about five, who was inspired by Sousa to perform an impromptu dance that was part Swan Lake, part hip hop, and part little kid running around.

Actually, this fountain show was only a shadow of the traditional show performed at the main fountain garden, represented in the map above, which could give Versailles a run for its money.. 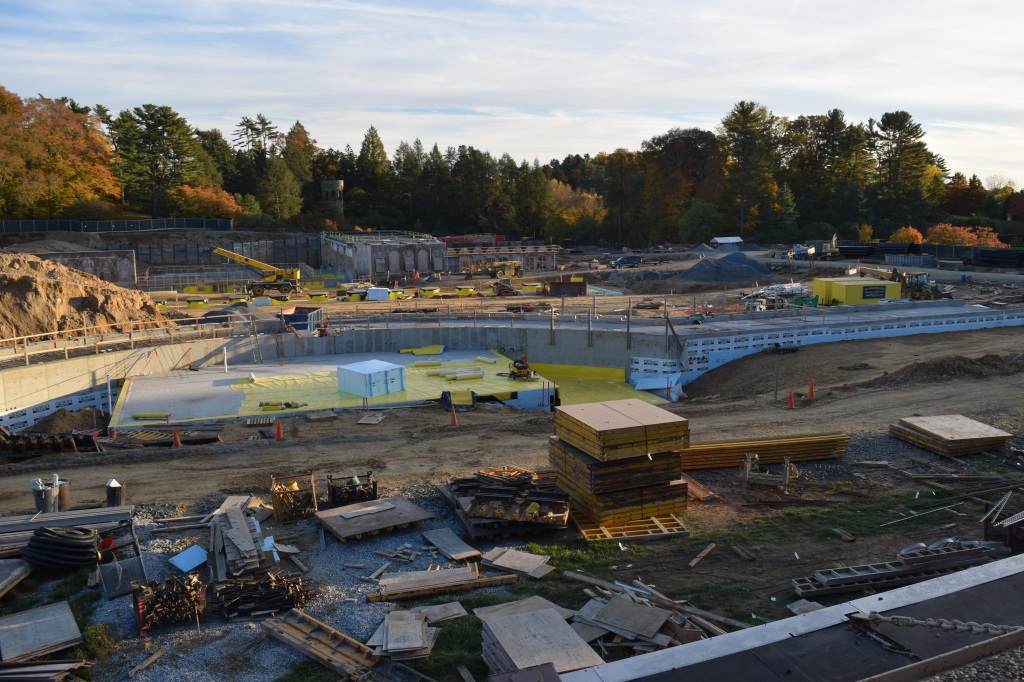 Currently it is being updated and made even more magnificent, and looks like this. It is closed to the public until 2017.

Oh, and I shouldn’t forget the Topiary Garden, for people who like that kind of thing. It was right next to the rose garden, which had quite a few roses in bloom, a surprise for late October. Many were nicely fragrant. We didn’t get any pictures, though. 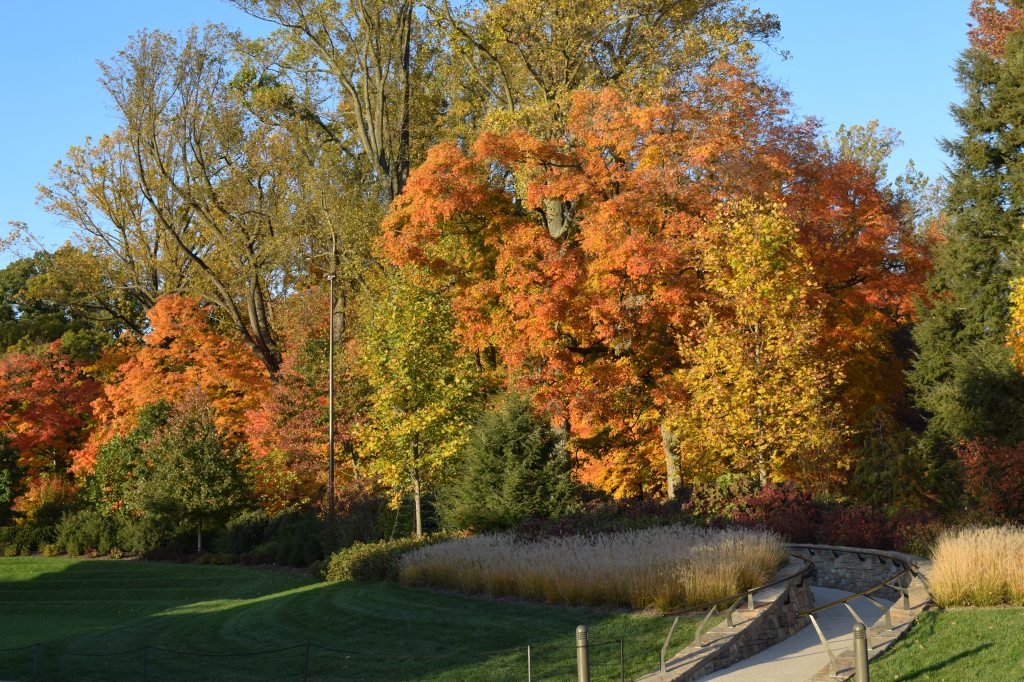 Longwood is full of curving paths that disappear into woods and behind hedges. It’s hard to restrain yourself from following each and every one.

53 Comments on “Longwood Gardens in October, Part I”