Algonquin Island is part of the Toronto Islands, which I wrote about in this post a few days ago. The Toronto Islands are a unique space, the largest urban area in North America without motor vehicles. In that last post we wandered around Ward Island, which has the flavor of a North Woods artist colony.

Now let’s pick up where we left off, crossing the foot bridge between Ward and Algonquin Island.

We walked under a canopy formed by tall conifers on either side of a narrow lane.

The first garden we came to was built around a small pond with paths made of wooden planks. I loved the combination of water with wood, stone, and tall grassy plants. 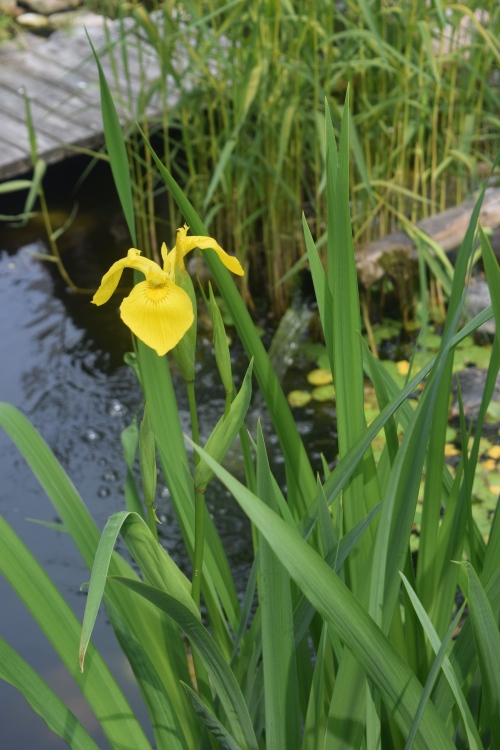 The yellow iris were just beginning to bloom. 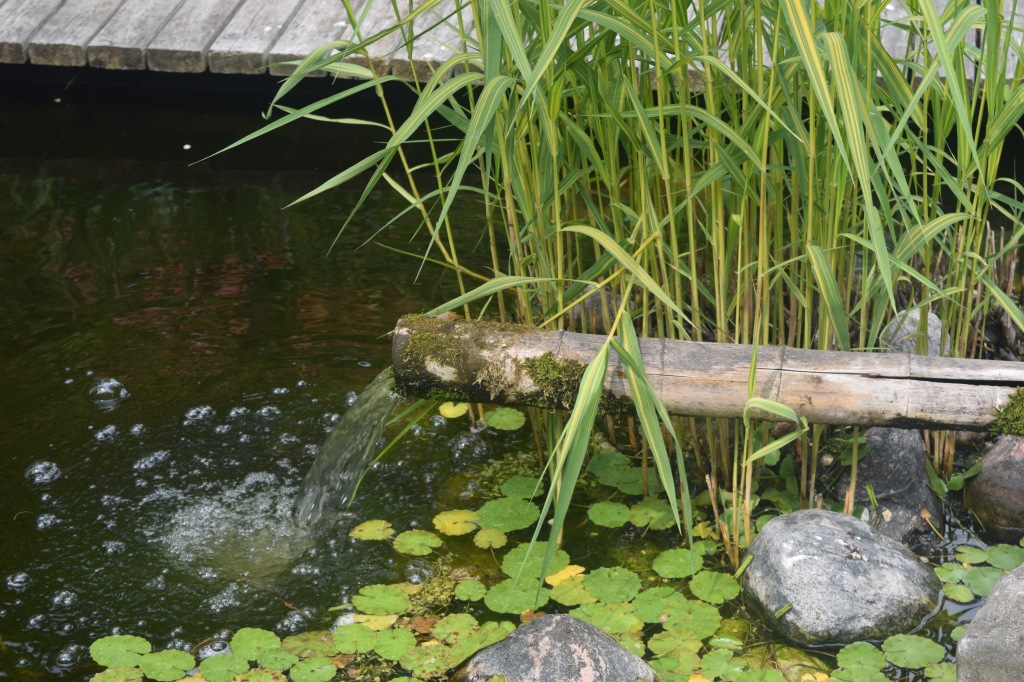 Water flowed into the pond from a hollow bamboo pole, one of several elements suggestive of a Japanese garden. 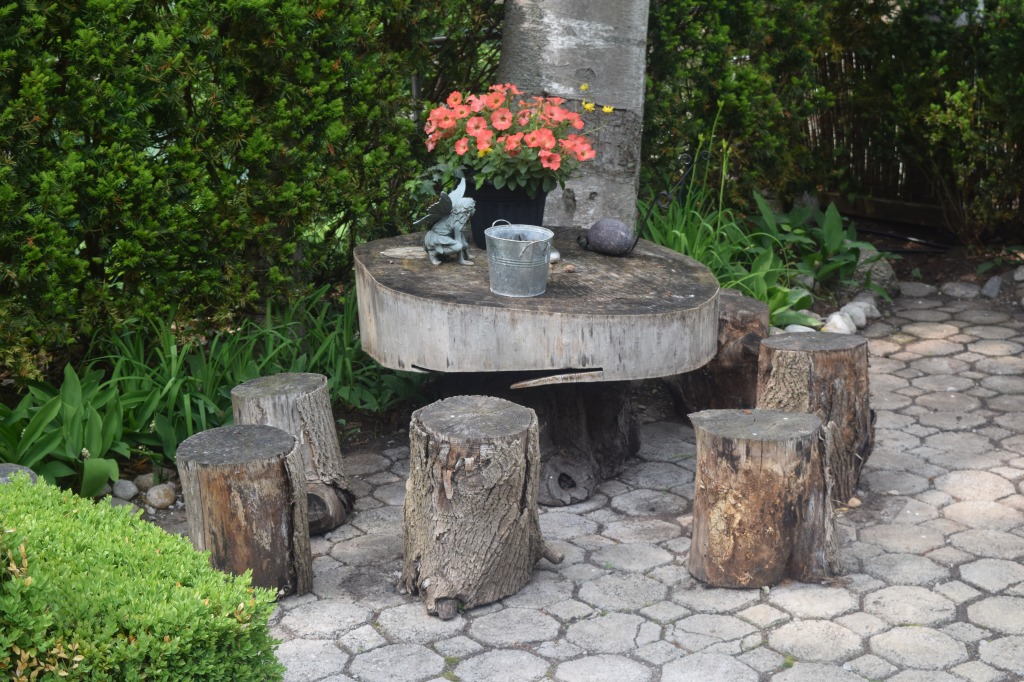 I like that table made from the cross section of a tree, but those stumps look more decorative than comfortable.

You can never have too  many flower pots. The repetition of the containers on the shelf is very appealing, and somehow they look right with the flowers blooming in the raised bed below.

We strolled onward to another garden. Algonquin Island is a very green place.

My parents had some big Rhododendrons in their New York garden and I think of it as an eastern shrub. These are beautiful, and I love the contrast with the Japanese Maple. 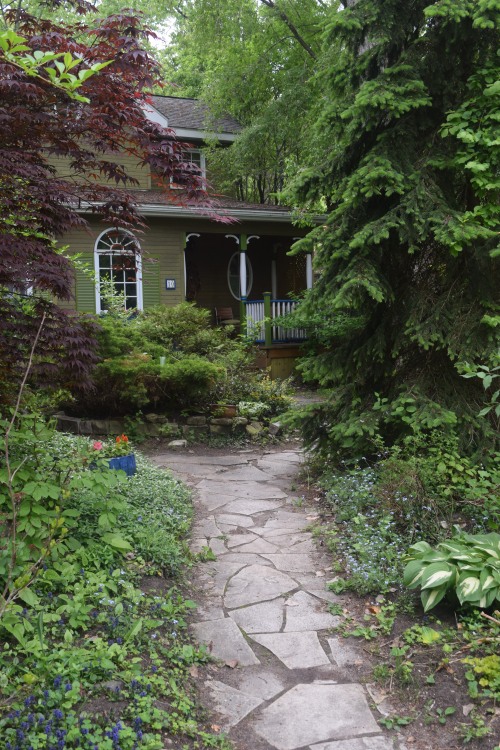 Not really sure, but I think this was not one of the open gardens and Judy took this picture from the lane. The house and its surroundings have a real “cottage in the woods” feel. 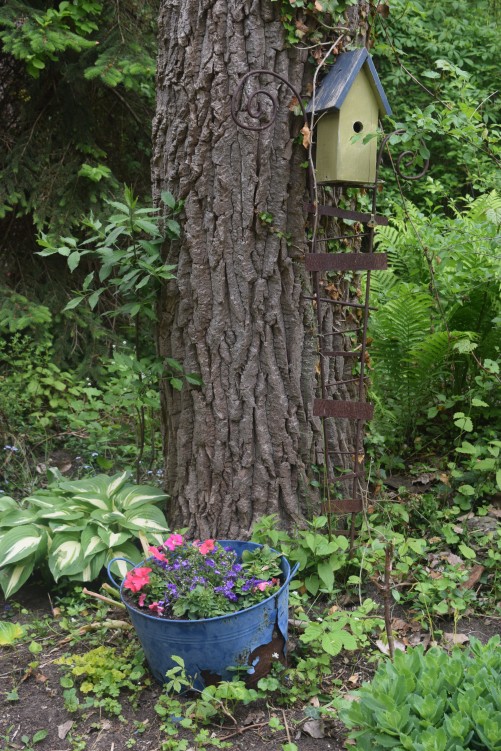 A rusty metal ladder, a birdhouse, and an old pot full of flowers provide company for a venerable tree.

Some of the gardens on Algonquin Island had more of a suburban feel, or suggested the garden of a gracious summer cottage, as opposed to the more bohemian vibe on Ward Island. 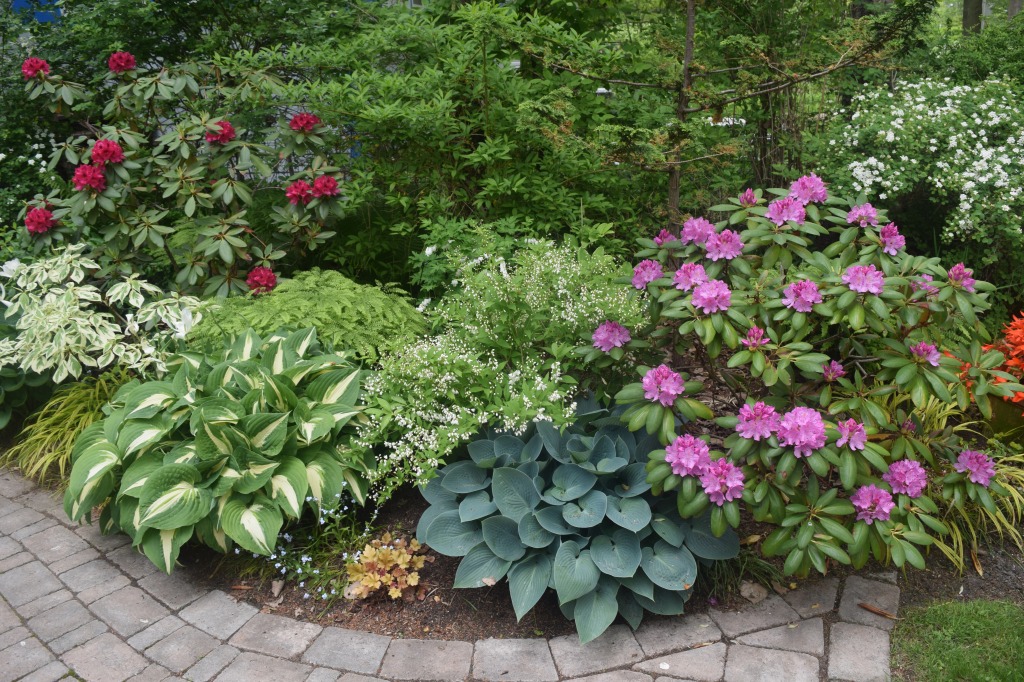 I don’t think I’ve ever seen so many happy ferns and hostas.

OK, that’s it for now. Let’s close with a picture of the photographer against the Toronto skyline seen from Algonquin Island.

In another post (coming in the near future), we’ll finish up at Algonquin Island. There’s one more garden in particular that is really worth seeing.

← Smooth Hydrangea: It Grows On You
Robin Goes a Huntin’ →