Posted on April 6, 2013 by gardeninacity

Guess Who Came Early For Dinner?

You know when you’re expecting guests, and you are trying desperately to clean the house and get the food ready, and somebody shows up 30 minutes early while you are still shoving piles of papers and books into random drawers? Well, I had the horticultural equivalent to this experience today. I had taken the day off to spend some quality time with the garden, and my plan was to devote the day to spring clean up, of which there is a lot to do.

However, when I opened the door this is what I saw. 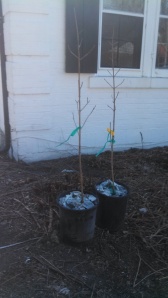 This North American native is a small flowering tree that does well in part shade. It also has unusual fragrant flowers. It comes highly recommended by author and garden designer Tracy DeSabato-Aust, who uses it frequently in her designs.

The Fringe Trees are going in the northeast corner of the house, where I have just removed three hoary old bridalwreath spirea shrubs. These were nice when their white mini-bouquet flowers bloom briefly in spring, but otherwise were just blah. Plus they took up an awful lot of space without really contributing much to the garden.

It was chilly today, in the 40s F (or about 7 degrees C),  but the sun was shining. I decided I would get my new arrivals planted. Once extricated from their boxes, I placed them about 7′ from the house and from each other, creating a triangle with the corner of the house making the third point. Following current recommended practice, I didn’t put any compost in the planting hole.

Instead, I gave my new trees a good soaking. Then I headed off to Anton’s, my favorite Evanston independent nursery, to buy a bag of mushroom compost for top dressing around (but not touching) the base of the trees.

While I was at Anton’s, some kind of plant-buying chemical was triggered in my brain, which is why I ended up buying a flat of white pansies, plus a couple of four packs of blue pansies. (White and blue are my preferred colors in the woodsy back garden.)

This was enough to fill my old wheelbarrow planter, plus the planter I built on top of a tree stump. The pansies will hang around until the beginning of June when I’ll switch to more heat-loving annuals.

Bottom line, at the end of the day I had not accomplished nearly as much spring garden clean up as I had planned. But I was happy.

How is the spring clean up going in your garden?

59 Comments on “Guess Who Came Early For Dinner?”