Not A Bowl of Cherries 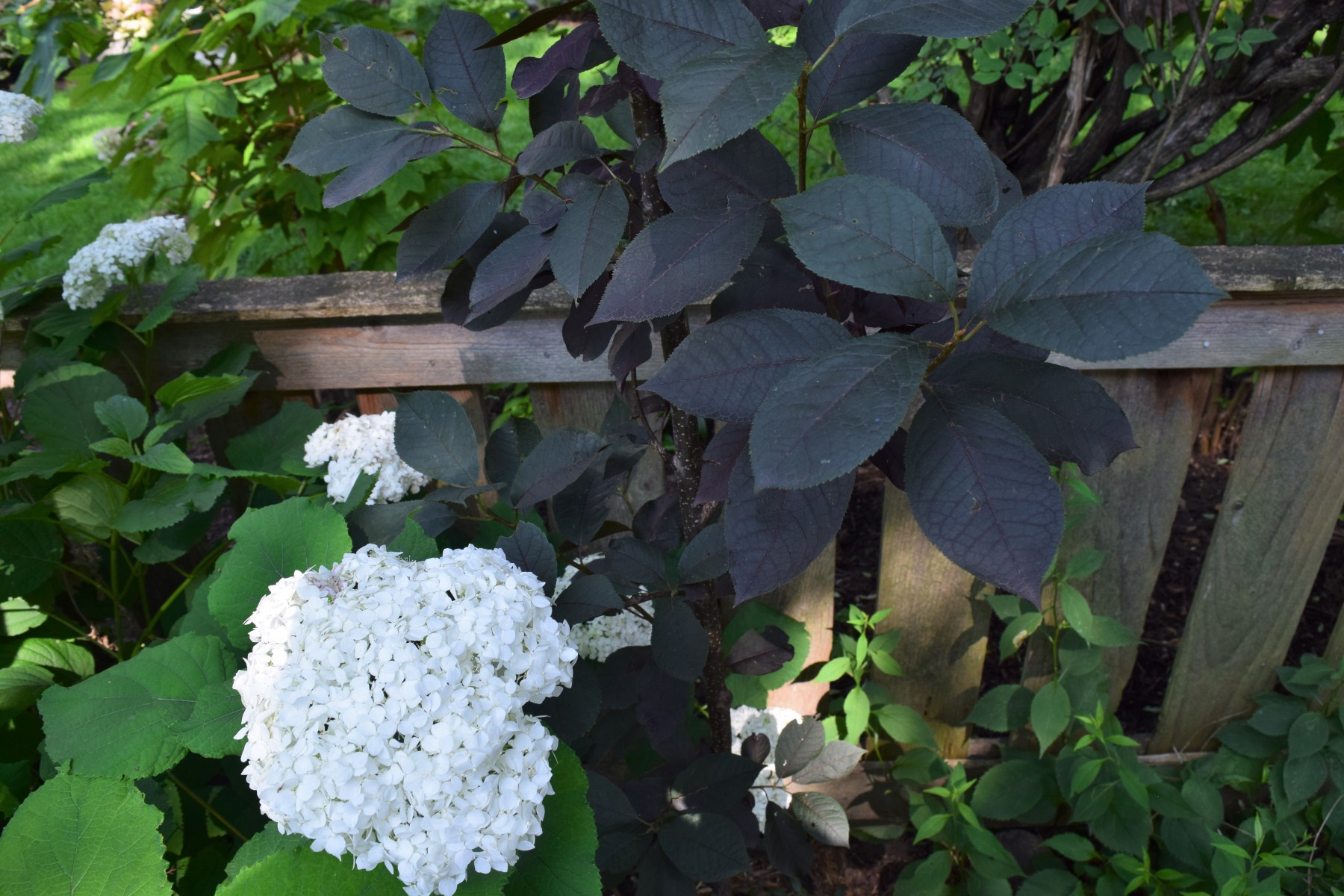 So I thought I was doing a good thing when I planted a purple-leaved Chokecherry (Prunus virginiana ‘Schubert’) in the back garden, and another along the east side of the house. Chokecherry is a small North American tree with great wildlife value. I was looking forward to the flowers, the fruits (small and very sour, but popular with birds), and the butterfly larvae (Chokecherry is a larval host for many butterflies and moths).

Turns out this plant has been a disappointment. For starters, while both trees have put on a good deal of growth, there have been no flowers and no fruits. I don’t really understand it. Chokecherry is supposed to tolerate part shade and it is in a spot where other plants tolerant of partial or light shade bloom with little difficulty.

As for butterflies, I have seen little evidence of insect herbivory. Only after these trees were planted did I come across this research done by the Mt. Cuba Center in Delaware. The researchers, including Douglas Tallamy, were trying to determine to what extent caterpillars utilized cultivars of native species, also known as “nativars”.

They found that, in general, nativars did not discourage insect appetites – with one exception, which was nativars bred or selected for red or purple leaves.

Not that I am against nativars. We have plenty of straight species in the garden, but I am also happy to grow a number of horticulturally superior nativars. As noted earlier, the Mt. Cuba research notes that “many traits commonly selected for cultivation do not deter insect herbivory”. Other studies have found that some nativars are equal, or even superior, to straight species when it comes to attracting pollinators. It all depends on the specific variety. As a general rule, double flowers are not pollinator-friendly.

Ironically, I’m not especially fond of purple leaves, but ‘Schubert’ was the only Chokecherry I could find for sale at the time I was looking. More recently, I found that Prairie Nursery is selling a straight species Chokecherry. In the case of this plant, if I had a do-over, I would have planted the straight species.

Incidentally, I really like the word ‘herbivory”, and would like to work it into my everyday conversation. How about: the sweet-and-sour cabbage was the cause of much herbivory at dinner last night, much of it from myself.

Anyhow, to put the cherry on top, so to speak, I found black knot on one of the Chokecherries yesterday. It was just one stem, which I removed and destroyed, so not a big deal. But it’s worth keeping in mind that Prunus species (which includes cherries, peaches, plums, and some other stone fruits) are susceptible to quite a few diseases.

I guess I’d better learn to enjoy those purple leaves, because these trees seem unlikely to have much else to offer.

← Out in the Garden, At Last
Uncertain Future for Lurie Garden? →

28 Comments on “Not A Bowl of Cherries”