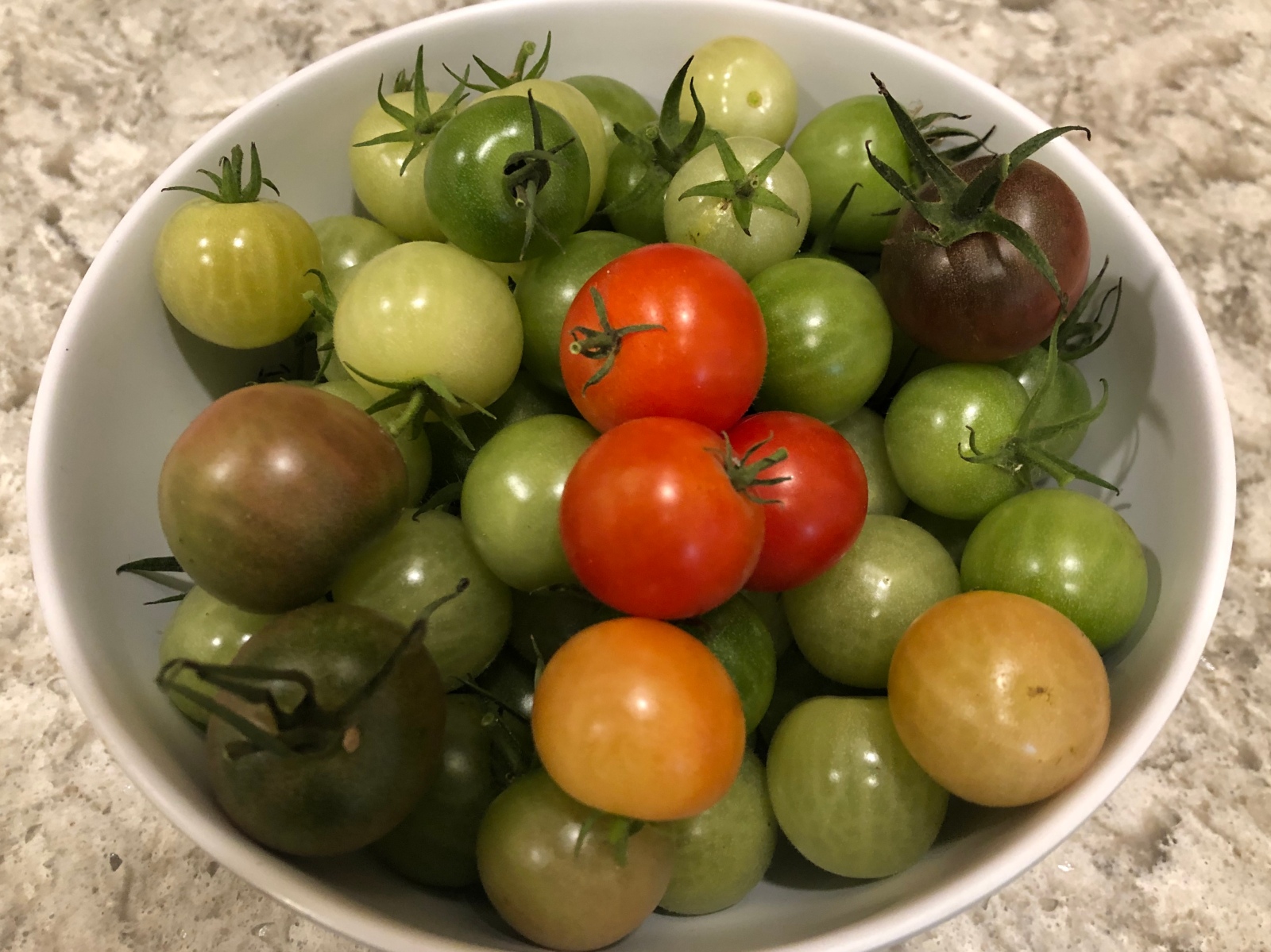 Posted on December 19, 2020 by judyatgardeninacity

If the day is as cold and gray where you are as it is in Chicago, you will know why I want to talk about summer tomatoes.

We don’t have a lot of space in the garden that is sunny enough to plant vegetables. This makes me a bit sad (perhaps you have seen that I, Judy, am writing this post, my very first). I am a much bigger fan of growing vegetables than Jason is. He plants cherry tomatoes and a few herbs to humor me. They grow cheek-to-cheek with the flowers.

Here the tomato vines are, heading for the roof. There is something about this particular small garden spot, right outside the front door, which plants love. Followers of the blog will perhaps recognize this as the space that is occupied by the Giant Purple Wall of Clematis earlier in the season.

The vines produced plentifully, if a bit later than expected. There were two plants, Black Cherry and a red cherry whose name we have forgotten.

Of course, the very best way to appreciate summer tomatoes is plucked straight from the vine as you walk past. Most of the tomatoes were eaten outdoors, some were brought in for salad, and naturally, the squirrels got more than their share.

The vines kept producing into the fall, well past the point in the season that the sun could provide enough light and warmth to ripen them. I brought some into the house to ripen on the window sill. In late October, the vines were still heavy with tomatoes, mostly hard and green.

Eventually, the point came when we began worrying about frost. There were too many tomatoes to lose them all without making some effort to eat them.

The photo below is the vine after the first serious frost — but as you can see, there were still tomatoes to pick.

So one fine day, I picked them all. Many were hidden in the depths of the vines, and as you can see, many were also high enough that I had to bring out a ladder. It may be the first time I’ve needed a ladder to pick tomatoes. This bowlful represents only part of the harvest.

Now what to do? I cut them in half, dipped them in egg, then in flour and salt and pepper, and made fried green tomatoes.

We made many more than this, but they disappeared rapidly.

If I’ve made you long for summer tomatoes, in a couple of days I will post a recipe for an amazing roast tomato and bean spread made with winter tomatoes, the next best thing. (It was going to be in this post, but Jason is looking over my shoulder and told me the post was too long.) You can even use those sad cherry tomatoes that have been sitting on your counter waiting for you to eat them in a salad, but, admit it, they are past their prime, you bought too many, and one of these days you will need to throw them out — unless you make this roasted tomato and bean spread.

Meanwhile, an update on Jason. He’s had his ups and downs through eight rounds of chemo, but he’s hanging in there. Lately, for whatever reason, his appetite has returned somewhat, and with it, a bit more energy than he has had. He was able to eat a couple of Hanukkah latkes this past week, and with an extra week off before the next round of chemo, we’re looking forward to a good Christmas, with both boys and their partners with us (after testing and with all the precautions we can take).

And we both wish you a Happy Hanukkah, Merry Christmas, and all the other holidays you may celebrate, and hope that you can have your families as close as possible in this crazy year.

← I’m Back, With Another Favorite Aster
winter tomatoes can also be good →