Yesterday we were lucky enough to go on a tour of Lurie Garden’s spring bulb display with Jacqueline van der Kloet, who designed Lurie’s original bulb plantings in 2006. She’s in Chicago now to update those plantings, and will return in October to oversee the planting of thousands of new bulbs.

I haven’t been to Lurie Garden since last fall, so the visit felt a bit like a homecoming. Perhaps this is why I didn’t take notes, which would have been a really good idea. But the real reason was laziness. I just wanted to soak in all the floral glory without scribbling on a notepad. 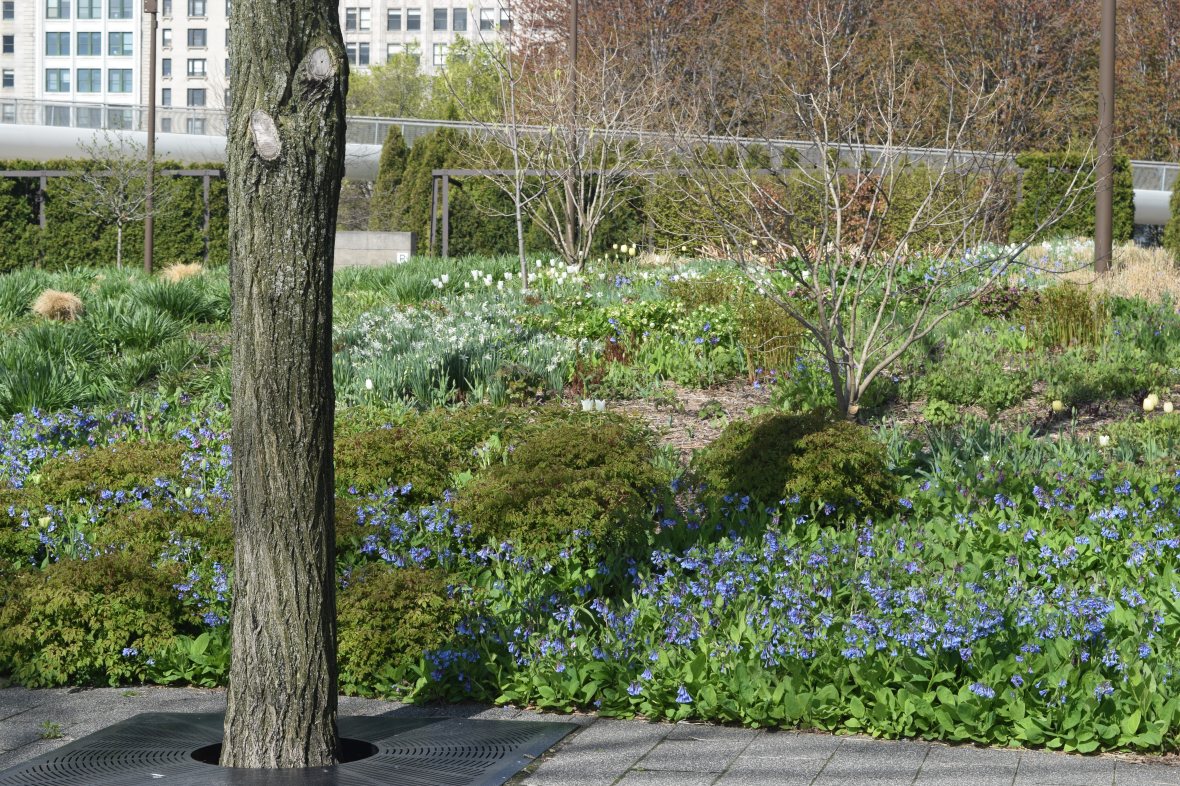 We started out in the Dark Plate, the partly shady portion of Lurie. I was delighted by the huge drifts of Virginia Bluebells (Mertensia virginica).

Jacqueline talked about how perennials and grasses need bulbs to provide early color. 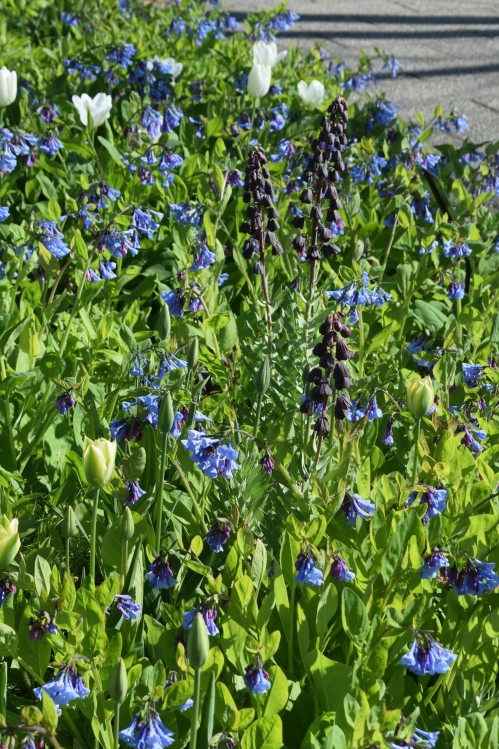 Persian Lilies (Fritillaria persica) were interplanted among the Bluebells. Usually I am not really fond of dark flowers or Fritillaries. But somehow the contrast between these two makes for a really exciting combination. 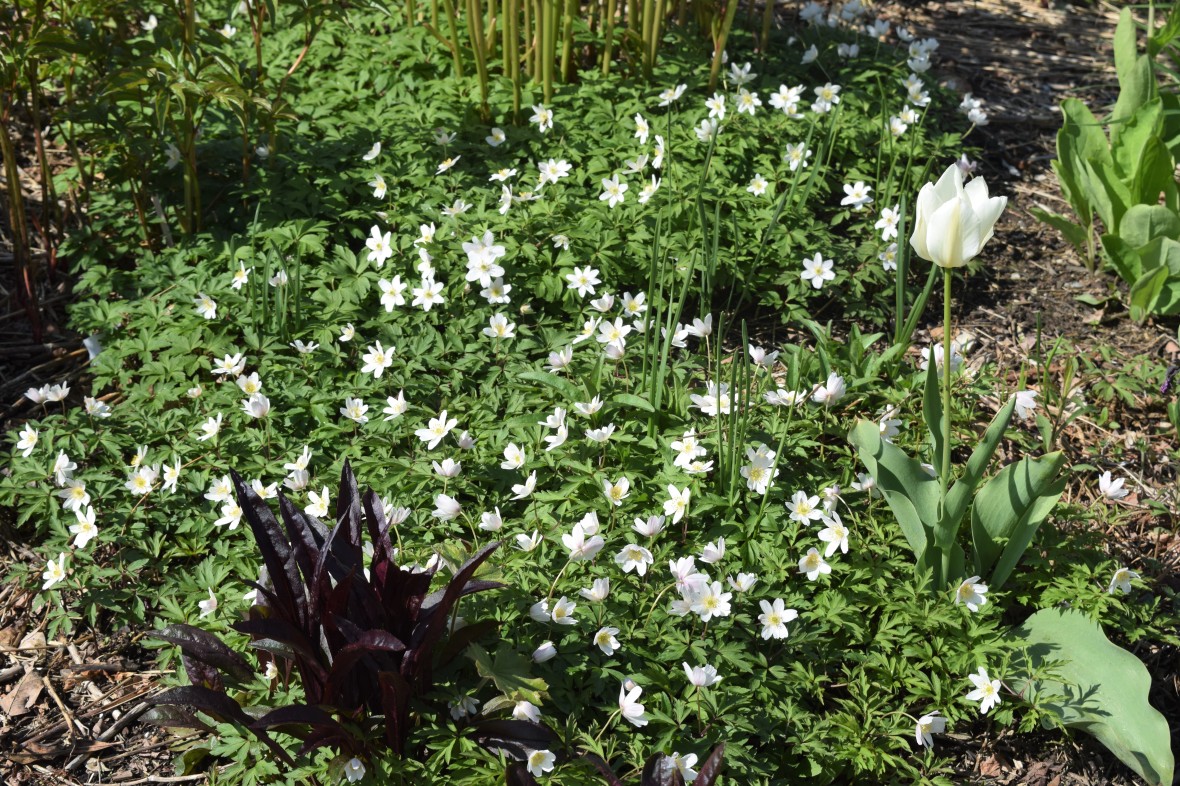 There were a number of big swaths of Wood Anemone (Anemone nemorosa). As the name implies, these are well-suited to partly shaded garden. Jacqueline pointed out that the same could not be said for some of the Tulips planted in the Dark Plate. After blooming, Tulip foliage needs lots of sun to generate enough energy for the following year’s bloom. Without it, they tend to become “blind”, meaning that they will send up leaves and no flower bud.

The new bulb plan will include lots of Snowdrops (Galanthus sp.) for this part of the Lurie Garden. 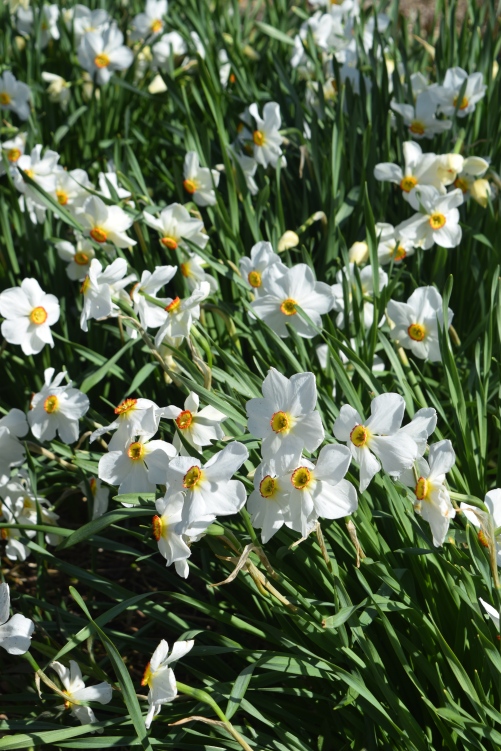 Daffodils tend to be more shade tolerant than Tulips. I love these Poet’s Daffodils (Narcissus actaea) – something tells me they will figure prominently in my bulb order for this fall. 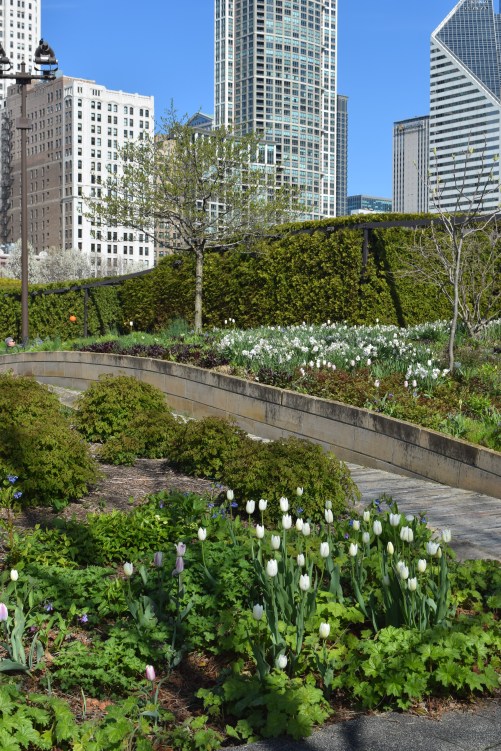 There were some lovely drifts of white Tulips in this part of the garden, even if it’s not the perfect area for perennializing this bulb. 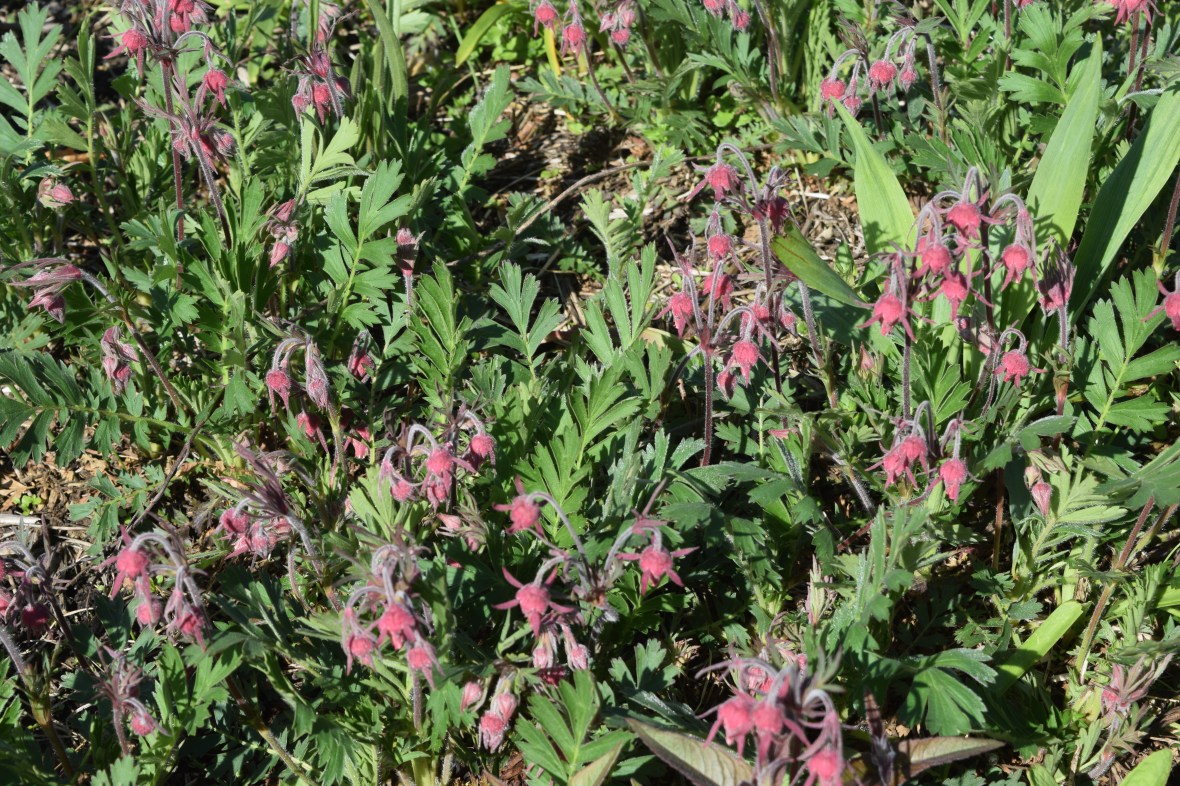 Heading over to the Light Plate, the part of the garden in full sun, I was struck by the big patches of Prairie Smoke (Geum triflorum). Not a bulb, I realize, but a great plant, one that thrives here but struggles for some reason in my own garden. 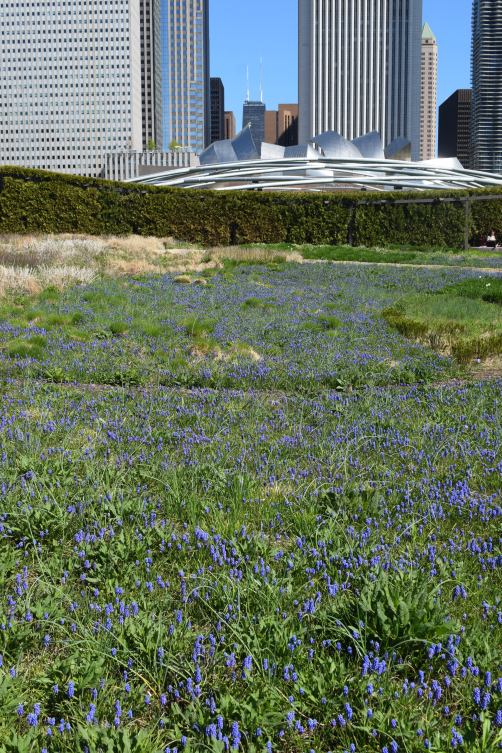 One of the outstanding features of the Light Plate is the River of Salvia. And now the Salvia is foreshadowed by a River of Grape Hyacinth (Muscari armeniacum ‘Superstar’). This is just brilliant, in my opinion. Apparently it took a few years for the Muscari to multiply to the point where they had visual impact. 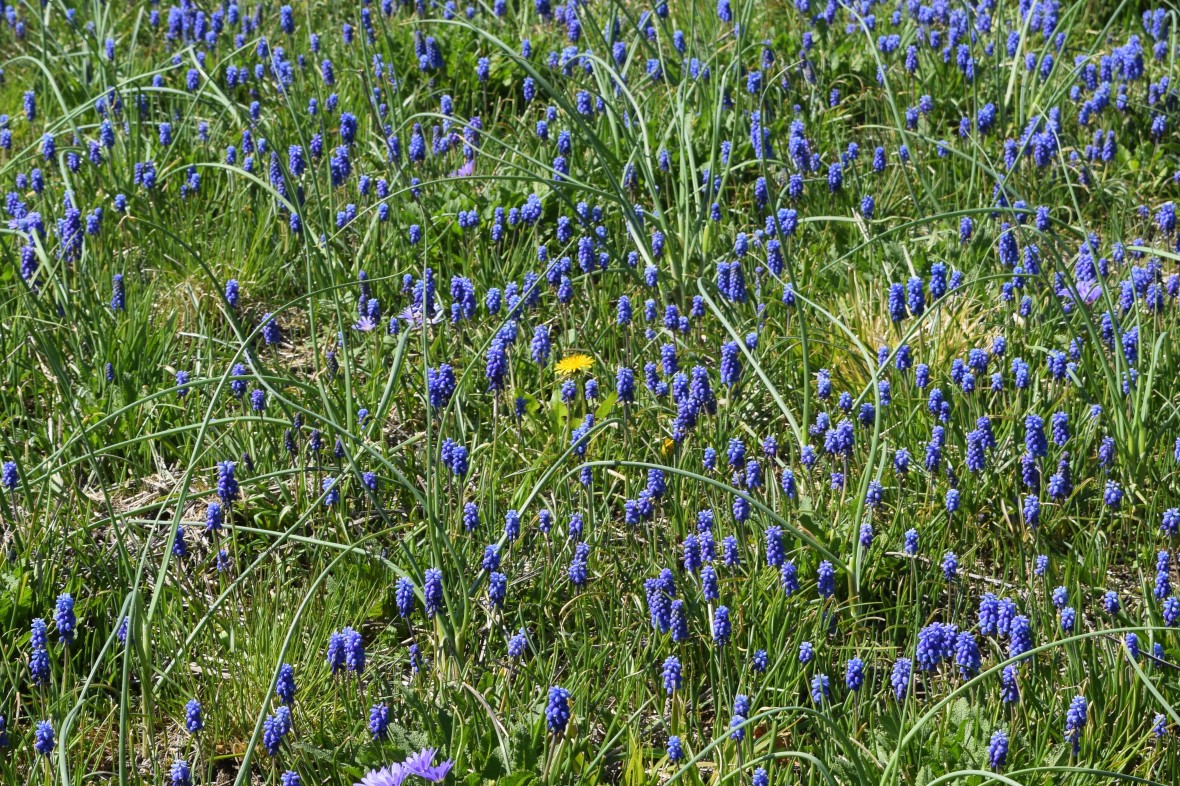 Here’s a closer look. Note that the Muscari are interplanted with Alliums, not sure what kind. I hope my friends at Lurie Garden don’t mind my showing this Dandelion, but I kind of like its little yellow dot in a sea of blue.

I was delighted to hear that there are plans for an even earlier river – this one of Crocuses. Though the mention of Crocuses made me think of rabbits. Jacqueline merely shrugged at the mention of the long-eared devils. She suggests interplanting bulbs that attract rabbits with Narcissus or others that rabbits find unpalatable. 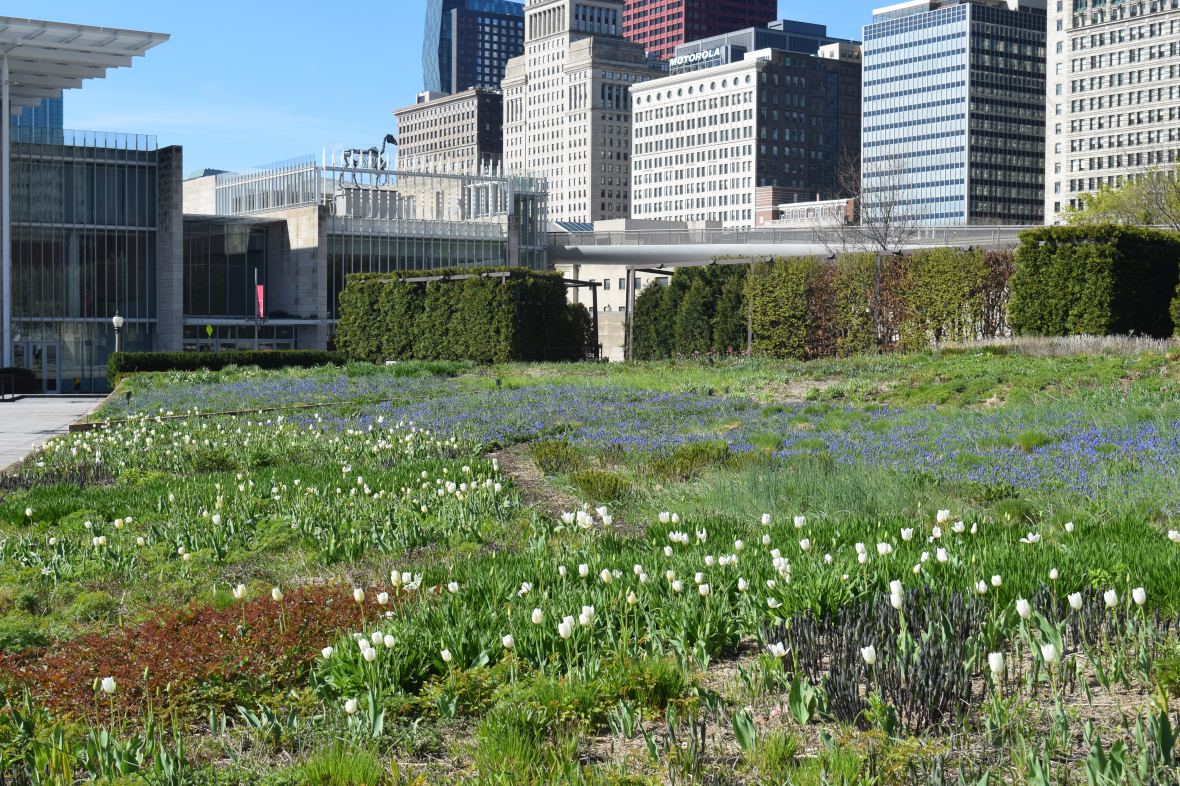 The new bulb scheme will continue and strengthen the current approach of parallel drifts of color provided by adjacent plantings of different species.

I didn’t catch which white Tulips are pictured here, but Jo ana Kubiak tells me that the varieties include ‘Hakuun’, ‘Maureen’, and ‘Purissima’. 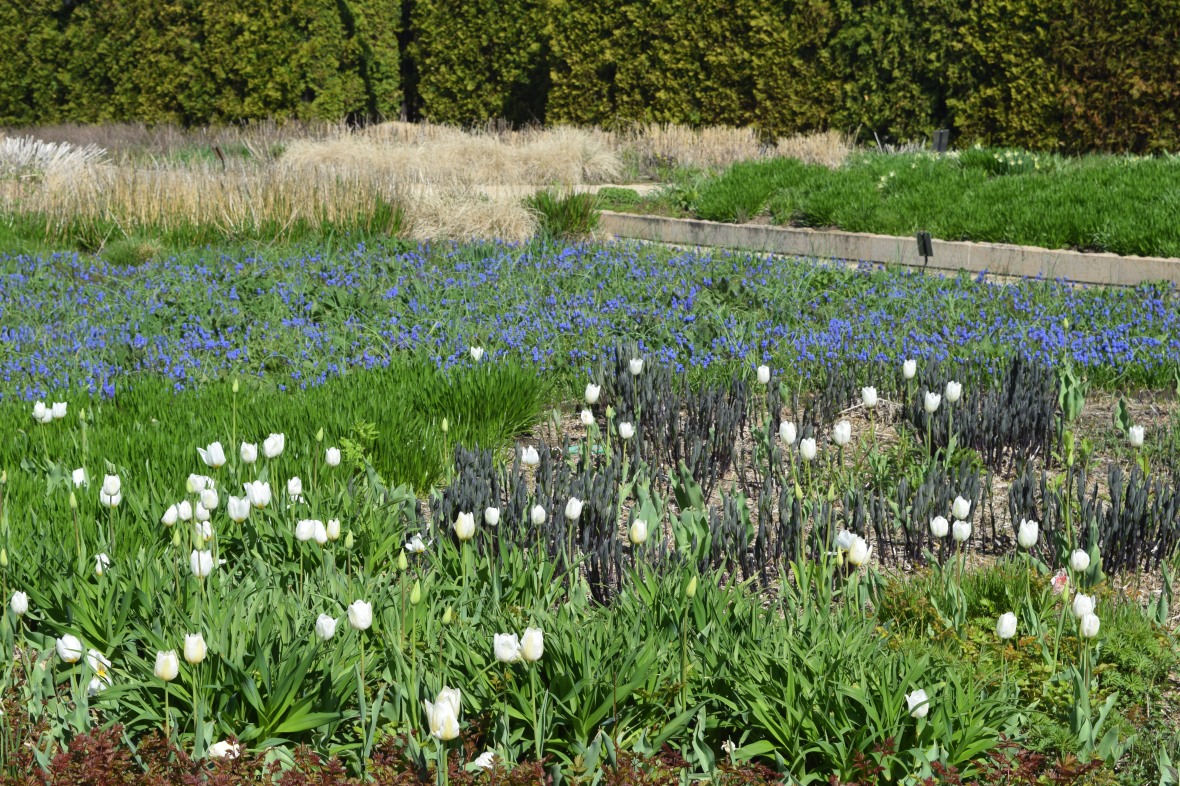 In the upper part of this photograph you can see that the Lurie Garden is not cutting back so close to the ground in order to protect overwintering pollinators and other insects. I thought it was a good look. 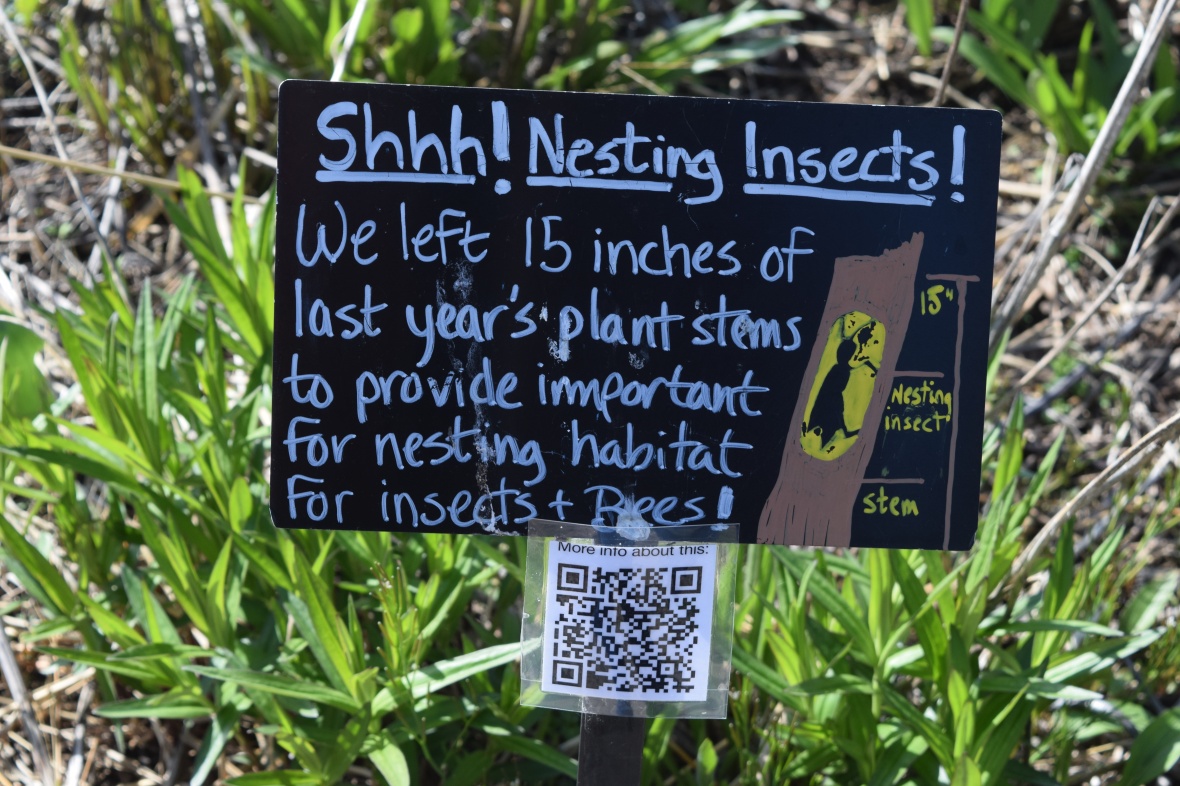 If you’d like to read more about their ecologically-minded approach to spring cleanup, check out this post on the Lurie Garden blog. 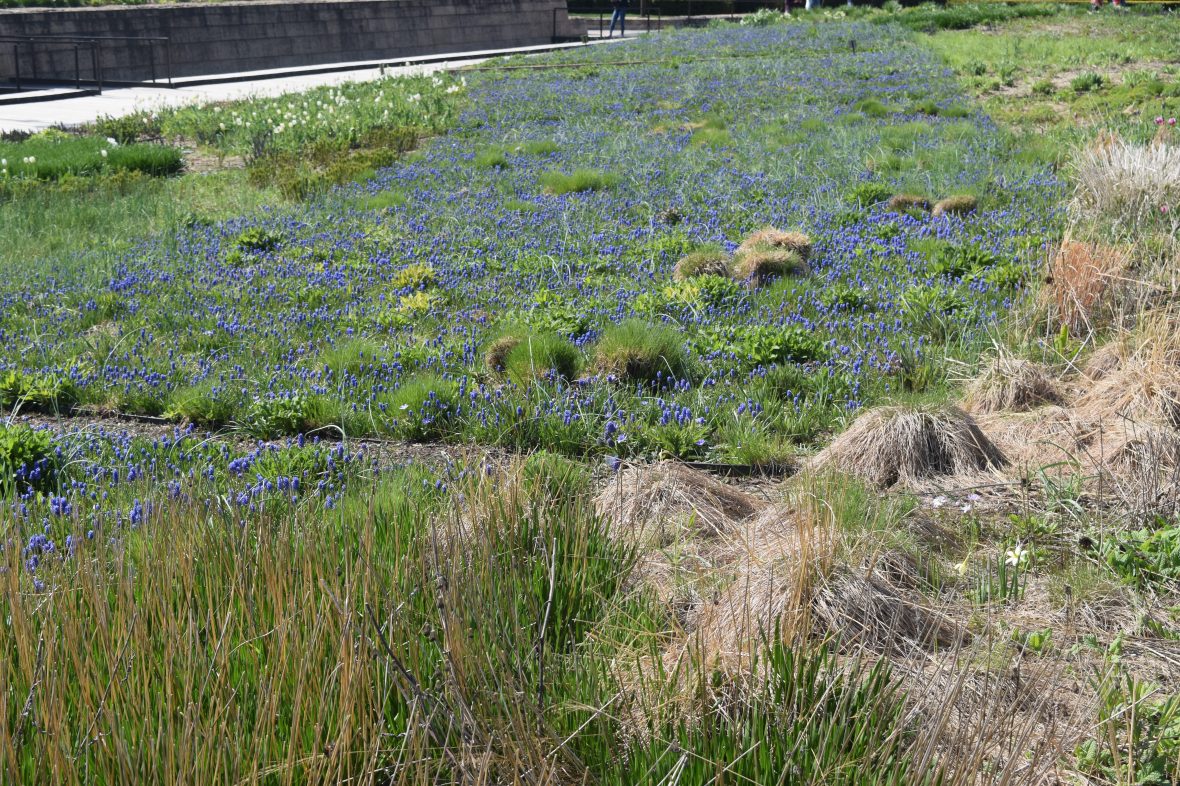 Another view of the River of Grape Hyacinths. 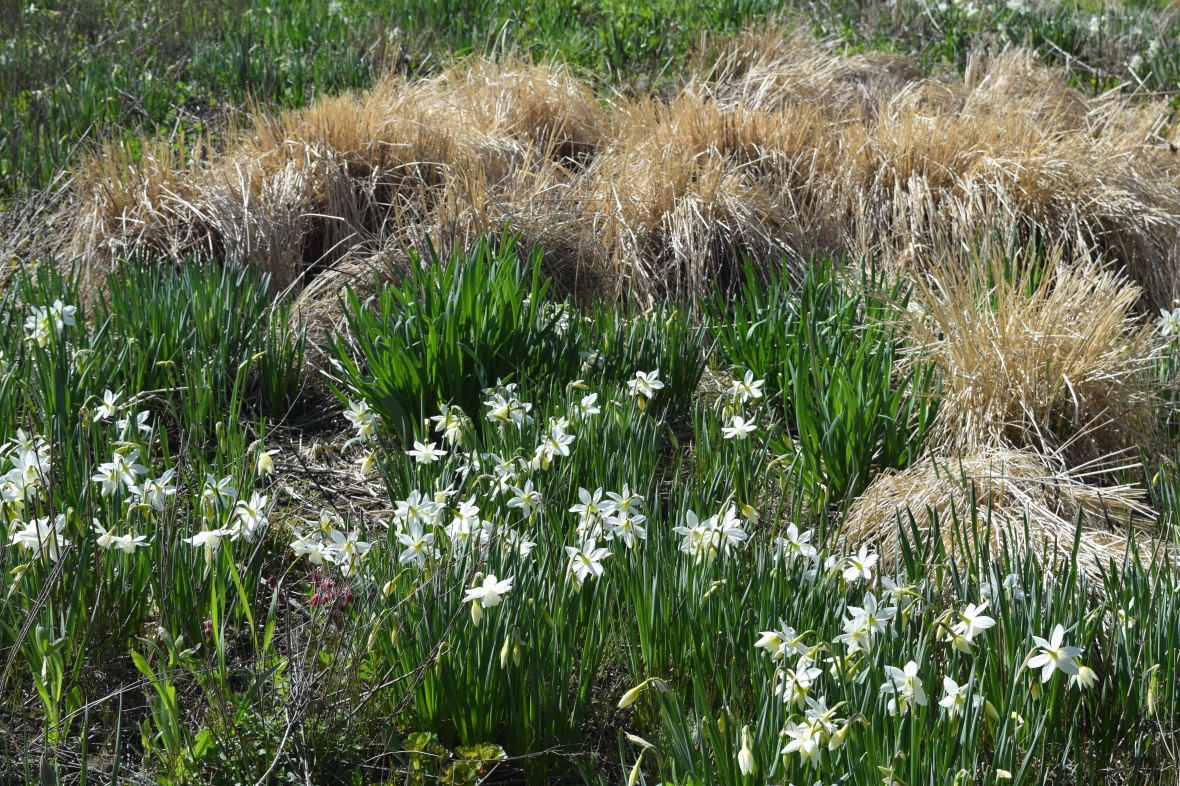 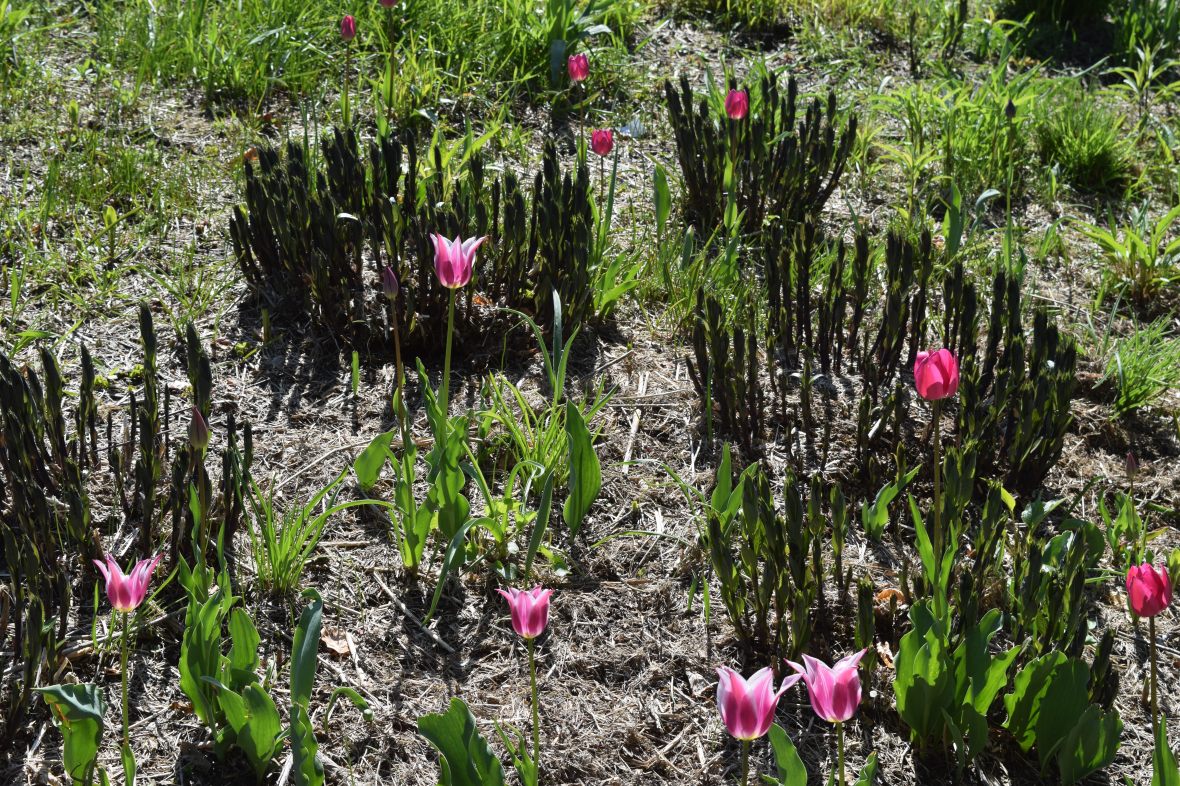 These are ‘Ballade’ Tulips in the southeast corner of the garden. It sounds like longevity will be at least as big a factor as color when varieties are chosen for new bulb plantings. Those dark stems are some sort of Baptisia, I think. 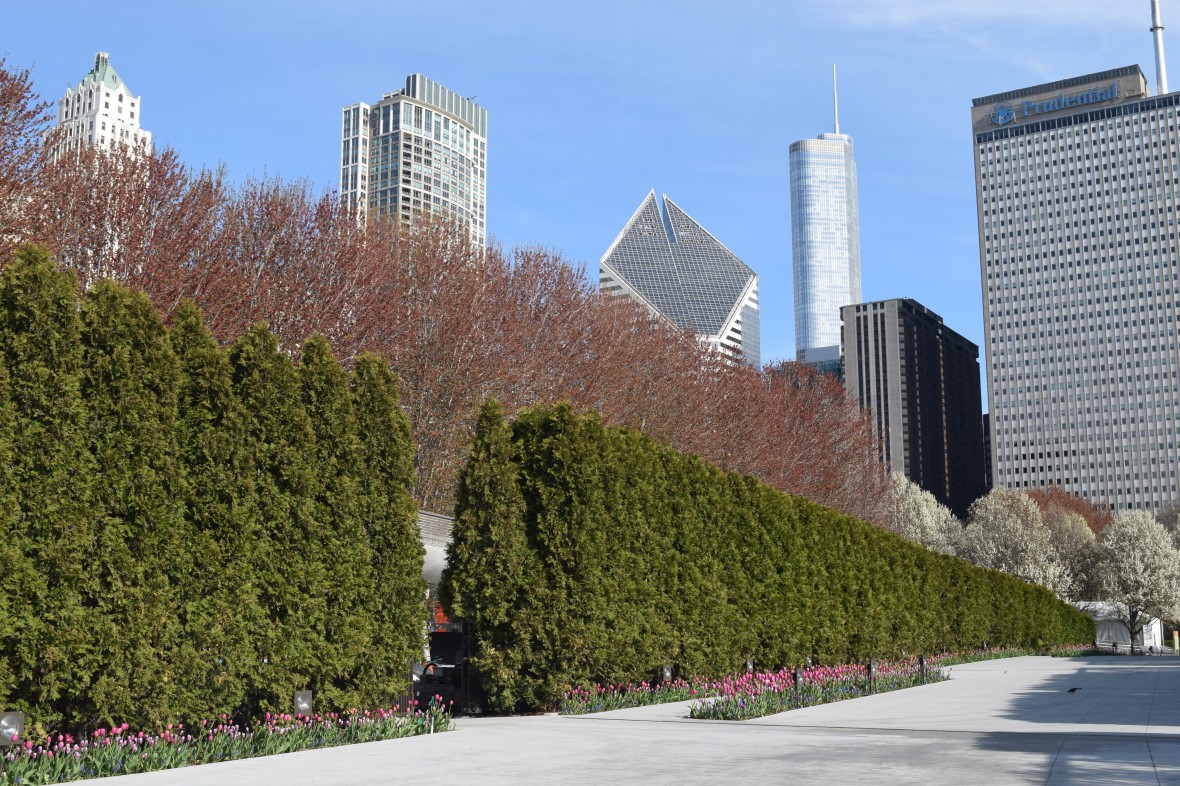 Our tour was over all too soon, but we got to hang out and talk plants for awhile while enjoying coffee and snacks. I was able to buy an autographed copy of Jacqueline’s new book, Colour Your Garden, which I look forward to reading.

Jacqueline van der Kloet will return in October to oversee the new bulb plantings – a massive effort with tens of thousands of bulbs. They’ll be looking for volunteers, and what could be more exciting!?

← Exploring the Smokies
4 Spring Flowers for Shade That I Love →