Some Grasses in Winter

Northern Sea Oats (Chasmanthium latifolium), does keep its handsome looks in winter. The seedheads seem to shatter over a long period.

Some people like the common name “River Oats”, which sounds less awkward.

Don’t know about you, but I find winter light really challenging for taking pictures. Either it’s dark and grey so everything has a flat look, or the sun is shining so low in the sky that it takes a lot of effort to avoid the glare.

Anyway, whether you call it River Oats or Northern Sea Oats, this plant is unrelated to actual oats (Avena sativa), except that they are both grasses.

Many native plant advocates feel strongly about using straight species rather than cultivars. They have some persuasive arguments on their side. Even so, I’ve gotta say that ‘Shenandoah’ Switchgrass (Panicum virgatum) is far superior to the species for use in the home garden.

I planted another 3 ‘Shenandoah’ last fall: 2 in the Lamppost Bed and 1 in the Parkway Bed. They were looking pretty miserable on the shelf at the Home Depot, as if they were crying out to me for rescue. Plus, they were only $3 each.

Aside from the red foliage and stem color, ‘Shenandoah’ has the advantage of more compact size AND it is much better about staying upright.

Personally, I’m drawn to the greater height and looser habit of straight Switchgrass, though that can make it harder to place. 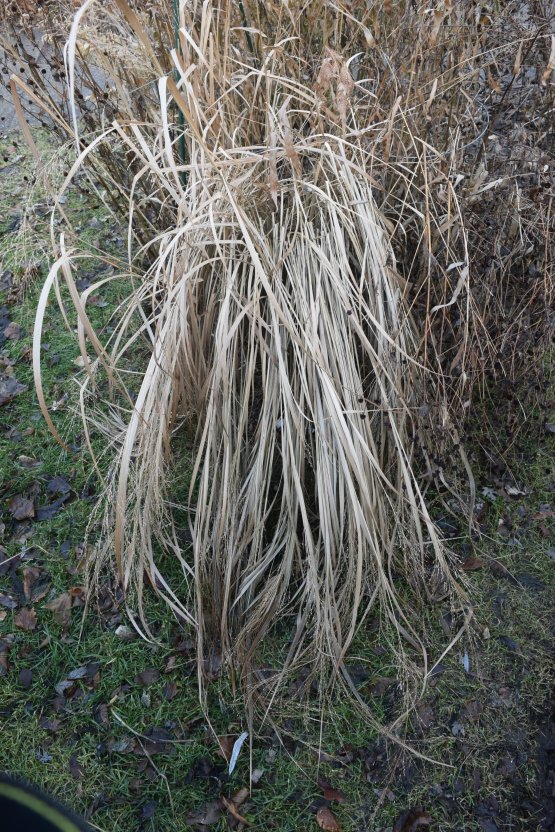 However, in my book the big negative with the straight species is that it tends to flop over, especially in winter after a few inches of wet snow have fallen.

Do you have a favorite grass for the winter garden?

← Meet My Buds
I Sense A Disturbance In The Vortex →

37 Comments on “Some Grasses in Winter”