Posted on November 9, 2018 by gardeninacity

Autumn seems like it was slow to arrive this year and in a hurry to leave, like a guest visiting out of a sense of obligation. 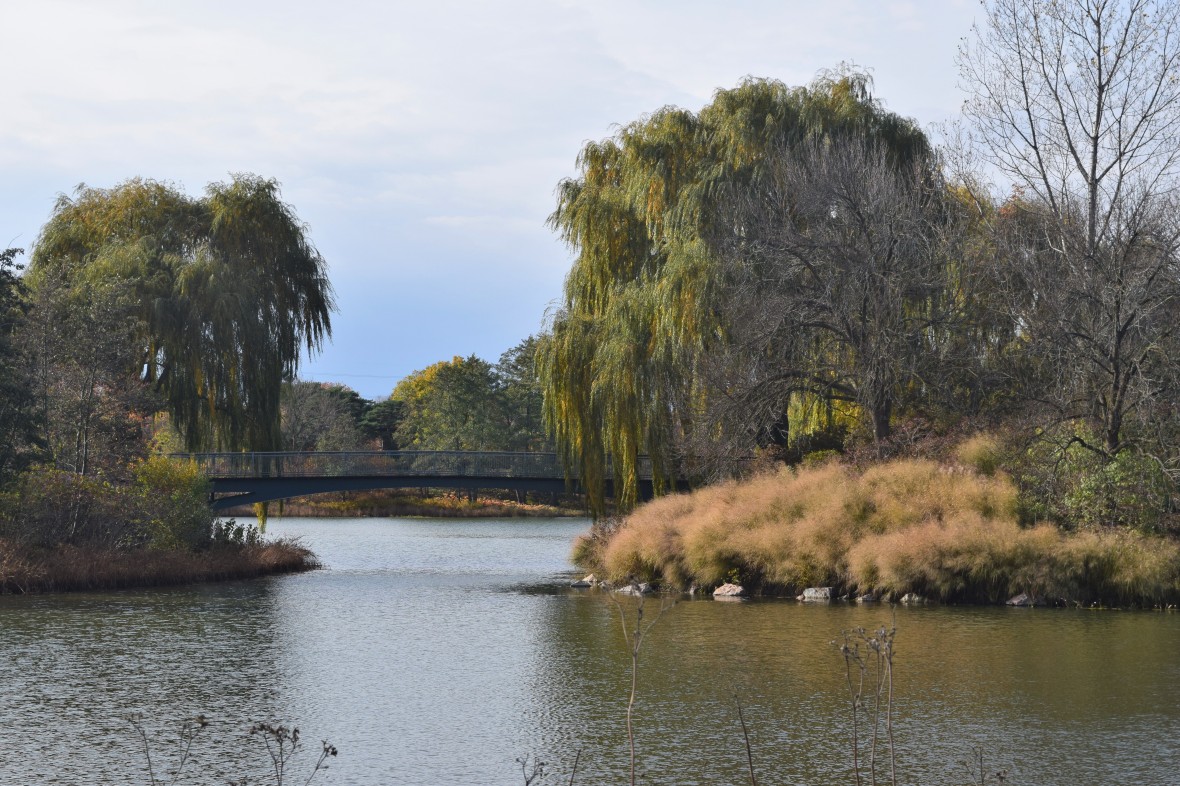 I haven’t been to the Chicago Botanic Garden in a couple of years at least. By the time I finally did get there a few days ago, the fall color was well past its peak. Even so, it was worth savoring the autumnal ambiance.

The sky shifted from overcast to partly sunny and back again, which explains the light variations among these pictures.

CBG is built on islands and the shoreline surrounding a large pond. This means that most garden views incorporate a body of water. For this visit, I began by walking around the outside of the pond from the visitor center toward the evaluation gardens.

Along the way there was a stand of deciduous conifers of several species. I didn’t catch any of the names. The needles of some, in preparing to drop for the winter, had taken on  a bright seasonal color. 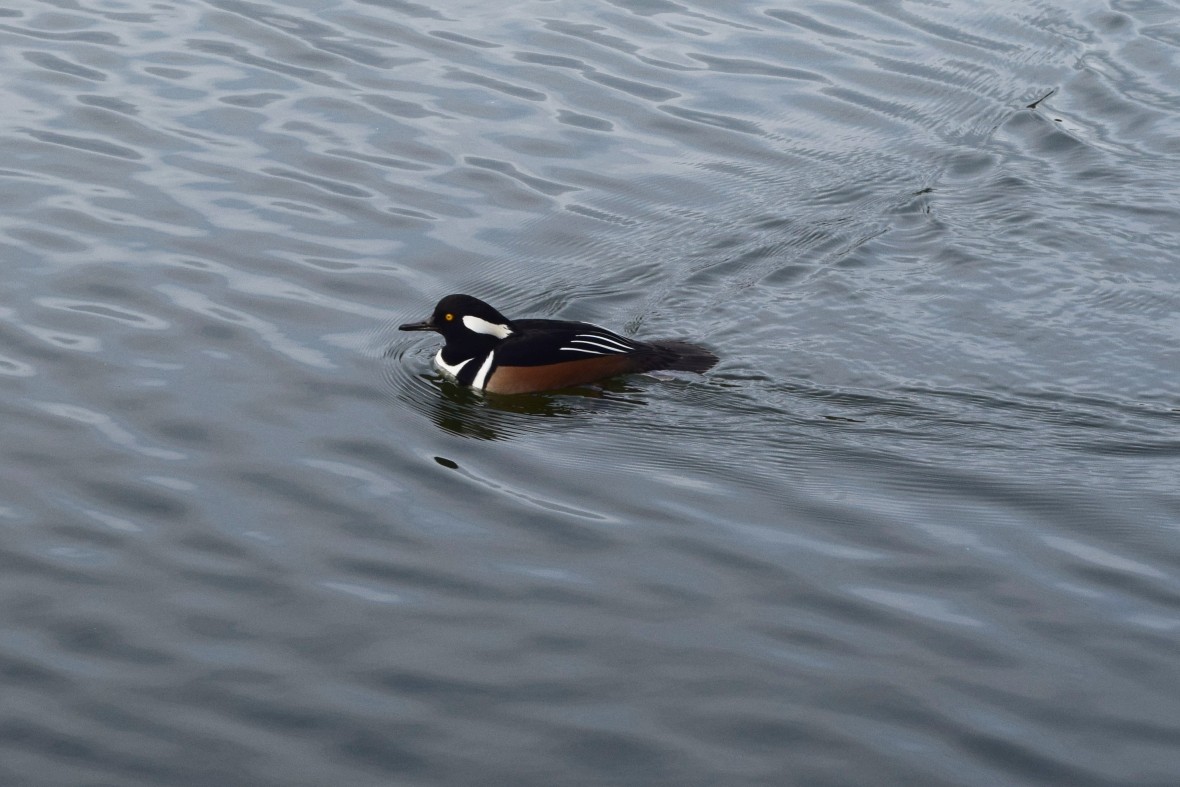 CBG always has plentiful waterfowl including ducks, geese, and herons. (In some areas you need to keep a lookout for goose poop.) Not sure if the bird above is just a fancy duck or something a little more unusual. 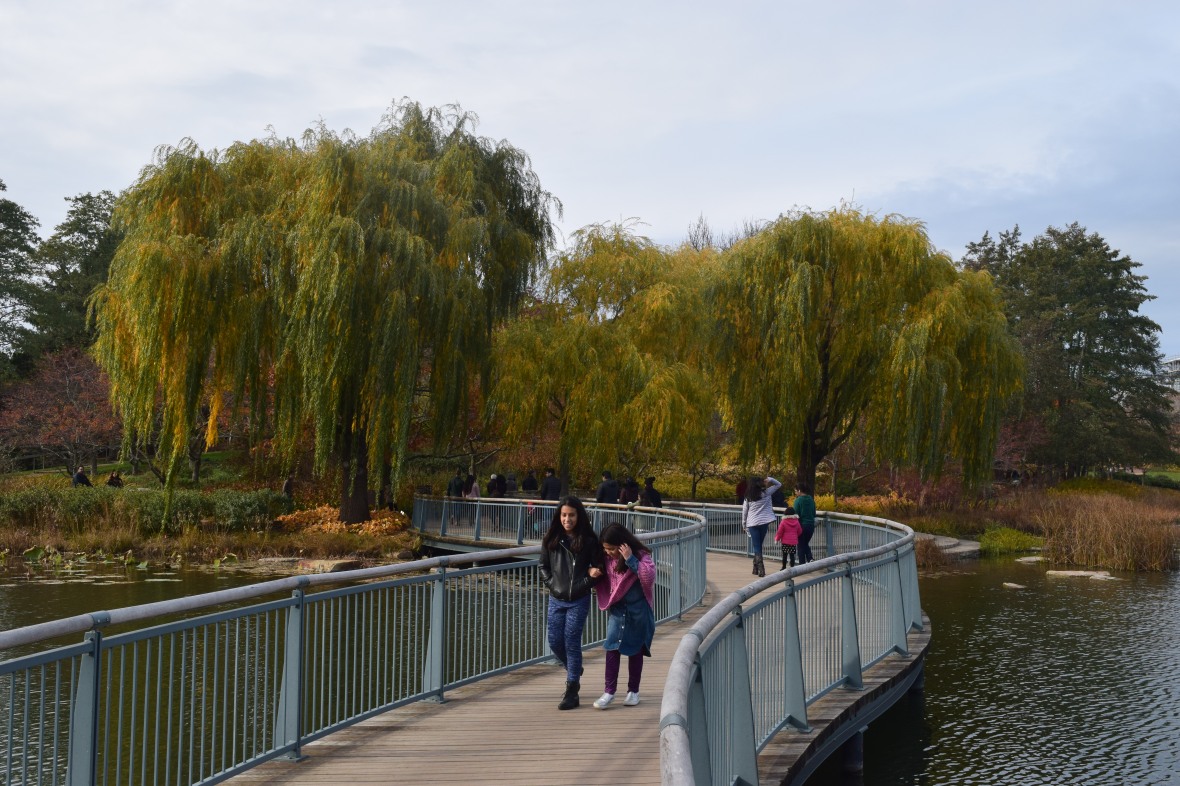 I love this curved bridge between Evening Island and the garden’s main island. Huge Weeping Willows (Salix babylonica) line much of the shoreline. At this time of year, the green of their trailing branches becomes streaked with yellow.

A particularly nice plant combination on Evening Island was Tatarian Aster (Symphiotrichum tataricus) with ‘Karl Foerster’ Feather Reed Grass (Calamagrostis x acutiflora). I had not noticed this before.

I was also struck by the the fall color of this Marsh Spurge (Euphorbia palustris). 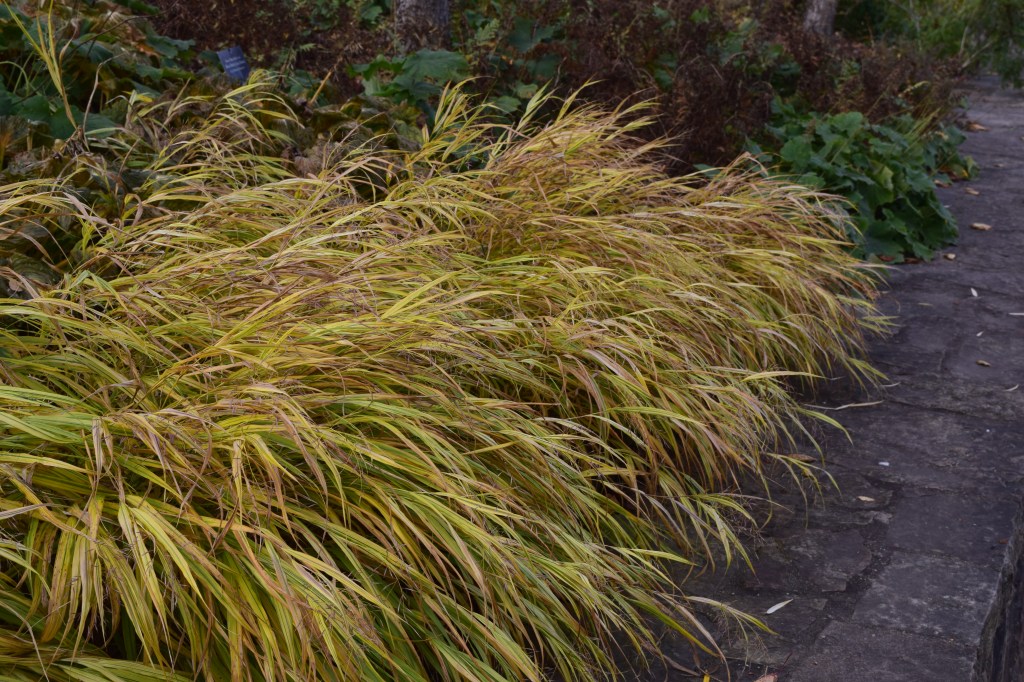 Back on the main island, a large stand of Japanese Forest Grass (Hakonechloa macra ‘Aureola’) lines a shaded path.

While some trees had already dropped their foliage, this Red Oak (Quercus rubra) still had a full complement of leaves.

The bright blue of Monkshood (Aconitum napellus) were among the small number of blooms that could still be found. 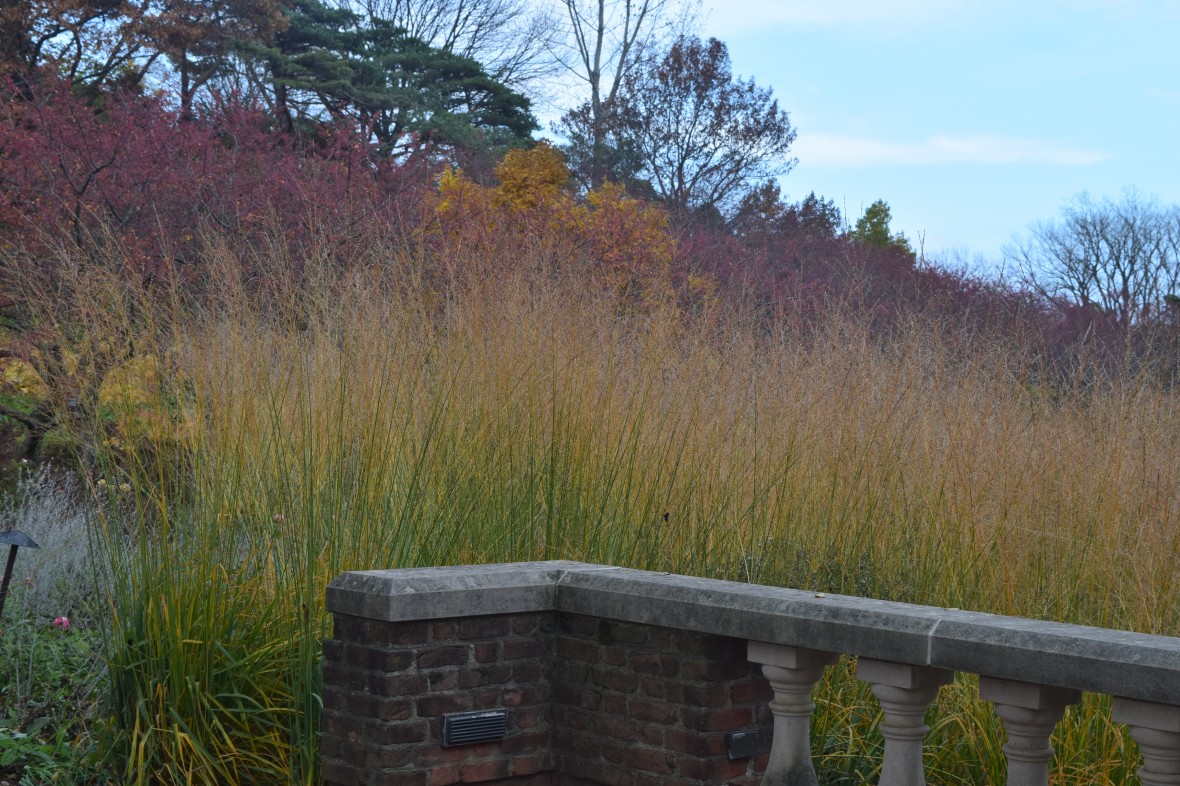 A cloudy mass of Switchgrass (Panicum virgatum) near the English Walled Garden.

Hundreds of Crabapple trees of many species and varieties line a portion of the CBG pond. It is quite the annual event when they are in peak bloom. At this time of year, the trees are covered with small fruits, which look like a red haze from a distance. Here the crabapples stand out against the golden foliage of Magnolia ‘W.B. Clarke’ (Magnolia salicifolia). 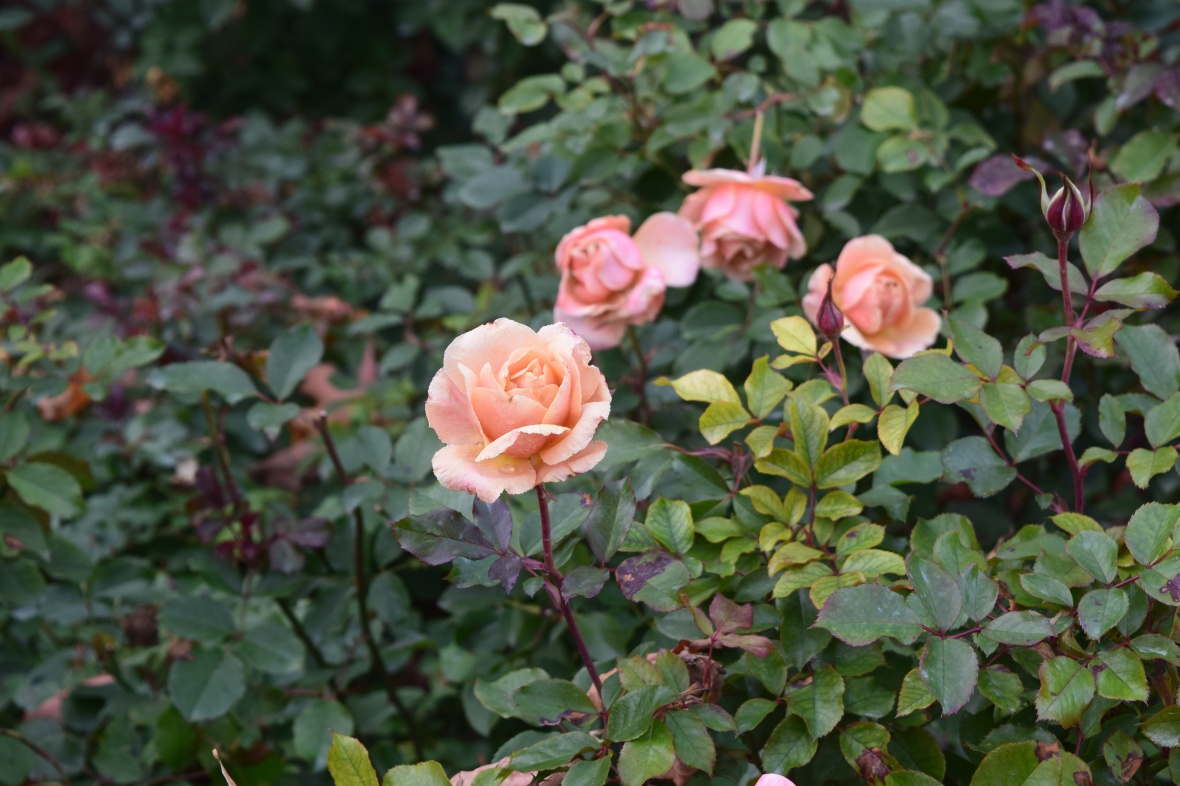 On my way out I passed through CBG’s rose garden. I was really surprised by the number of roses still blooming. My favorite was this Floribunda Rose, ‘Macivy’.

Other roses, like ‘Frau Dagmar Hastrup’, distinguished themselves with foliage that ranged from vermillion to deep burgundy.

Others were notable for plentiful rose hips.

Some sort of Spirea is putting on a nice show here. 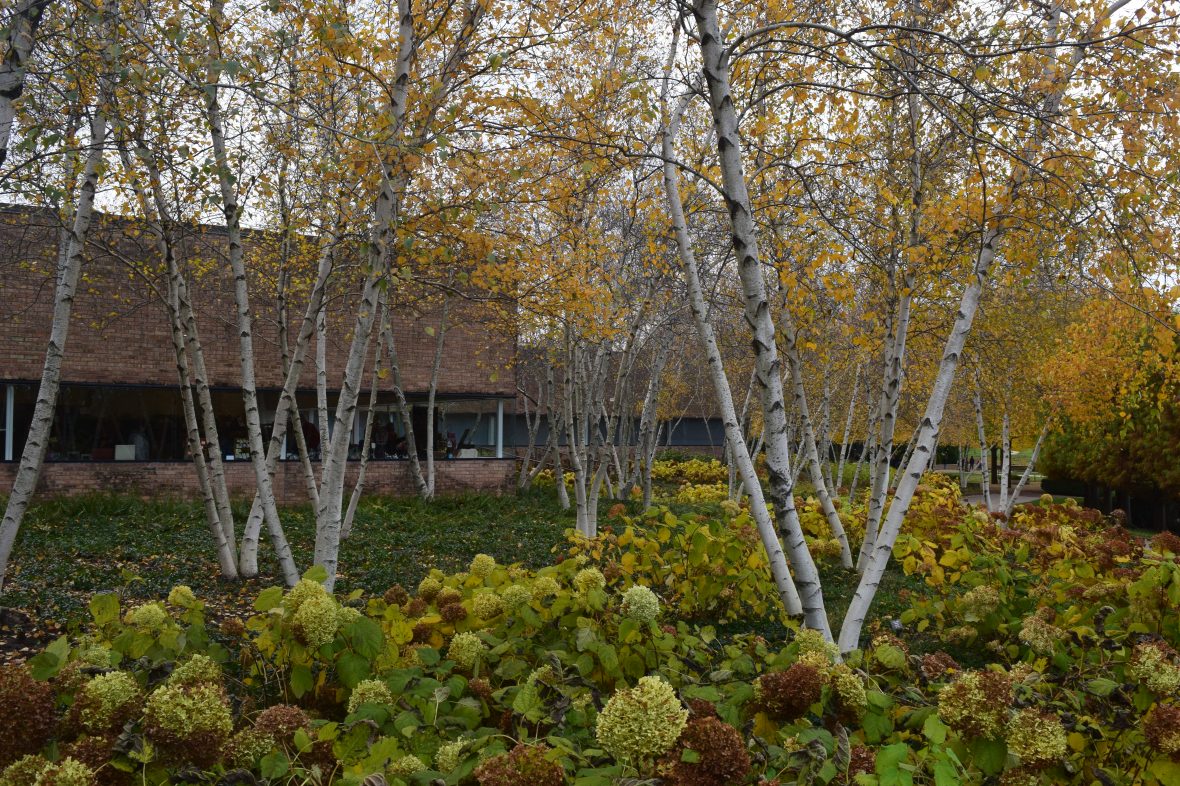 There is a planting of White Birch (Betula papyrifera) near the Regenstein education center that always looks wonderful. Which baffles me a bit, as I thought Chicago was too warm for this species.

Finally, I had to pay my respects to Carl Linnaeus before leaving. He always looks delighted by his surroundings, and why wouldn’t he be?

As I write this, the season’s first bit of snow is melting. There was not much frost this morning, and the ground is still soft. But the wind and snow has brought down much of the remaining foliage. I really didn’t get my fill of autumn color this year. Even so, there’s always spring to look forward to, and the seasons to follow.

UPDATE: If you tried to comment on this post but couldn’t, I apologize. I must have accidentally disabled comments. That should be fixed now.

30 Comments on “Gently Fading Fall at the Chicago Botanic Garden”