A Shady Garden in August

So let’s take a look at the Back Garden in mid-August. Summer is a quiet time in a shade garden, but there are still a few things worth noting.

A bright spot, so to speak, is taken up with Great Blue Lobelia (Lobelia syphilitica) near the birdbath/fountain. This had been a patch of Cardinal Flower (L. cardinalis). They were short-lived, but I decided to heck with it, I would just keep planting replacements. Problem is this last time they were mislabeled – right genus, wrong species.

My irritation has been tempered by the beauty of the Great Blue Lobelia. Also they attract hummingbirds just like L. cardinalis. Also I love blue flowers. We’ll see if these end up lasting longer than the Cardinal Flower. I did notice that the Great Blue Lobelia was just about the only plant to make it through last winter in a container.

Container flowers and foliage provide a lot of the seasonal interest at the moment. Above is a container planted with white Caladium underplanted with Creeping Wire Vine (Muehlenbeckia axilaris).

Another couple of pots near the back steps. This ones have some Fusion Impatiens (Impatiens hawkeri). These are New Guinea Impatiens with a different flower form. I think they are  now my favorite Impatiens.

I find the flower shape and colors more appealing than the usual New Guinea Impatiens. Also, Fusion flowers definitely attract hummingbirds, which I have not found to be the case with other types of I. hawkeri. 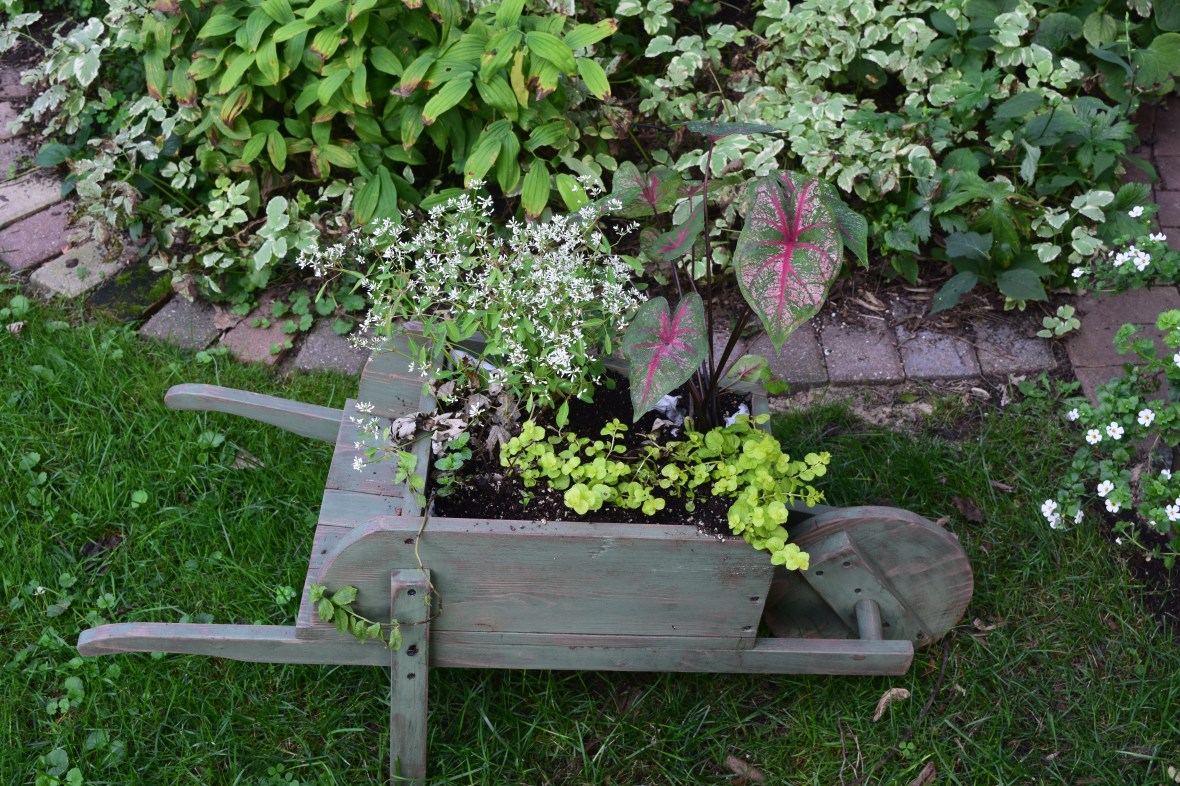 We got this little wooden wheelbarrow after the old one we used as a planter finally rusted out. Planted with Calladium, Euphorbia ‘Diamond Frost’, and Creeping Jenny. 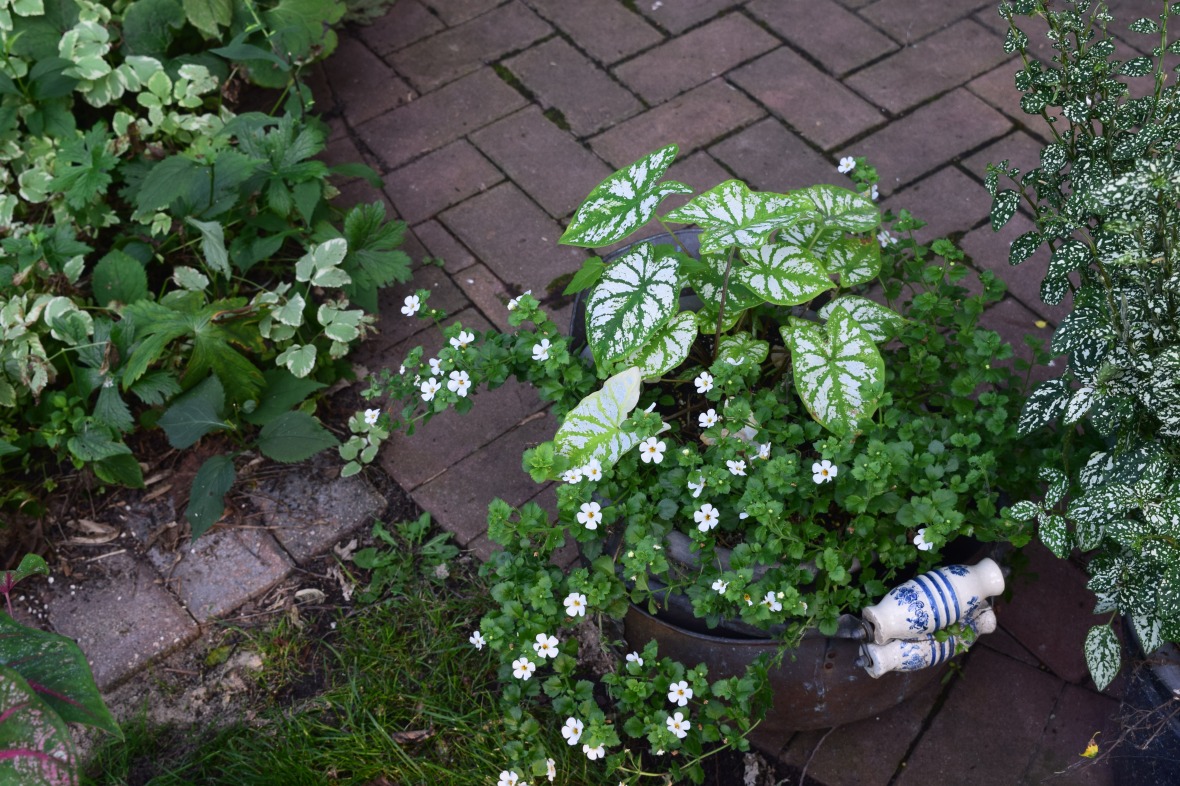 Containers along the edge of the patio: More Caladium  with Bacopa ‘Betty White’.

I’ve also been mixing Parsley as a filler with the other shade plants.

This is a problem area in summer. During the spring, this area is full of ephemerals: various Trilliums, Siberian squill, Virginia Bluebells, etc. But by summer, it’s a big blank spot. I’ve tried a variety of succession plants (Japanese Anemone, Toad Lily), but the results have been uninspiring. I move some of the containers into this area during summer, but this is not an adequate solution.

I suppose there’s always the possibility of ferns, and I could encourage the Zigzag Goldenrod (Solidago flexicaulus) that’s moving into the area.

Another problem: American Spikenard (Aralia racemosa) has been very disappointing. It looks good until early summer, then loses all its leaves. Not a good look at all.

This has happened the last two summers in a row. Time to think about some substitutes. 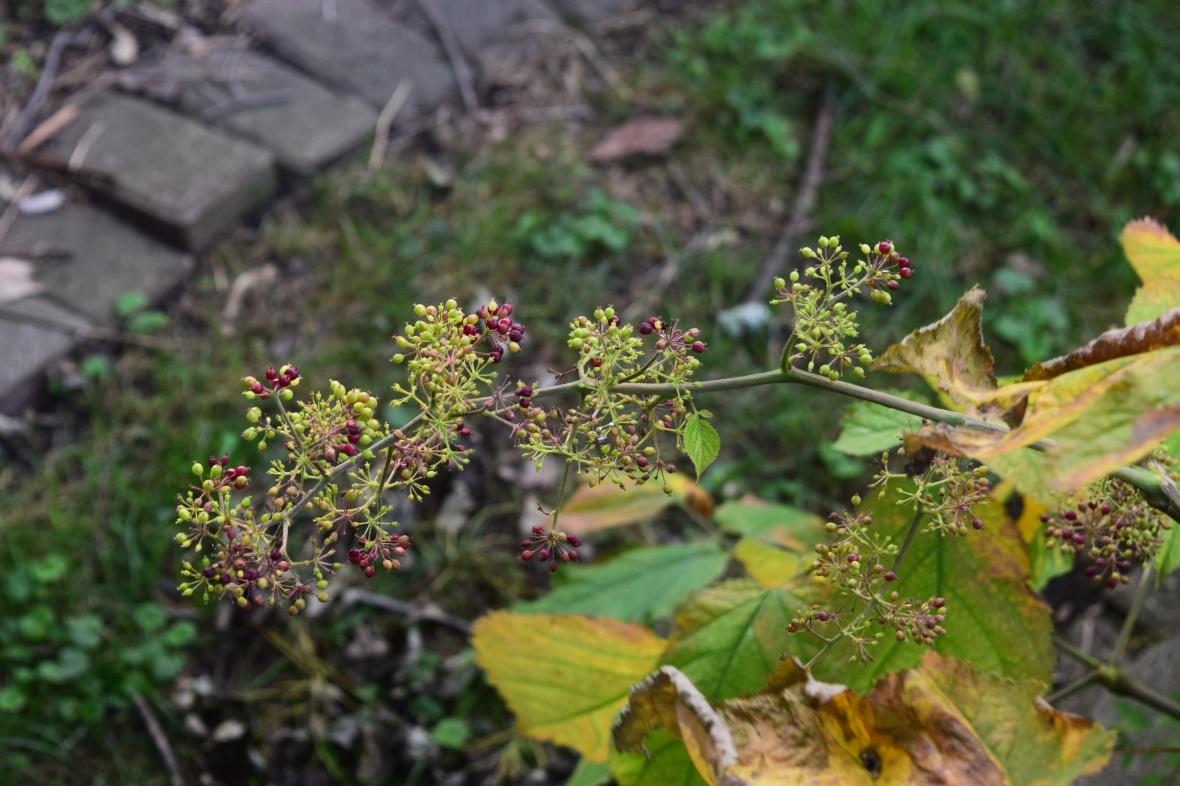 It’s too bad, because I like the Spikenard berries.

One last problem: Rupert is losing his feathery colors. This is a shame because Judy spent a long time carefully applying paint after using a fixative. Rupert should probably spend the winters in the garage, but Judy has to figure out how to restore his color.

33 Comments on “A Shady Garden in August”