Blue Days In The Garden

June is a month for blue flowers. High summer is a time for reds, oranges, and (especially) yellows. But the transition to summer is a quieter time, notable for blues and whites. Let’s look at some of the blue flowers currently blooming, then shift to something completely different.

Ohio Spiderwort (Tradescantia ohiensis) has wonderful blue flowers, but you can only see them in the morning. They close shop in the afternoon. I like the contrast between the blue petals and golden anthers.

In addition to observing an extreme version of banker’s hours, this plant is kind of an awkward customer. The flowers bloom in clusters at the end of long stems, which in our garden tend to need some support to avoid flopping.

But still, it seems to be a favorite with pollinators like this Sweat Bee.

Clematis ‘Betty Corning’ is another blue flower of June. Betty has just begun to bloom, and I’m looking forward to a floriferous summer.

It would be cool to make a hat the shape and color of this flowers. I have two of these vines in the Driveway Border and one in the Sidewalk Border. 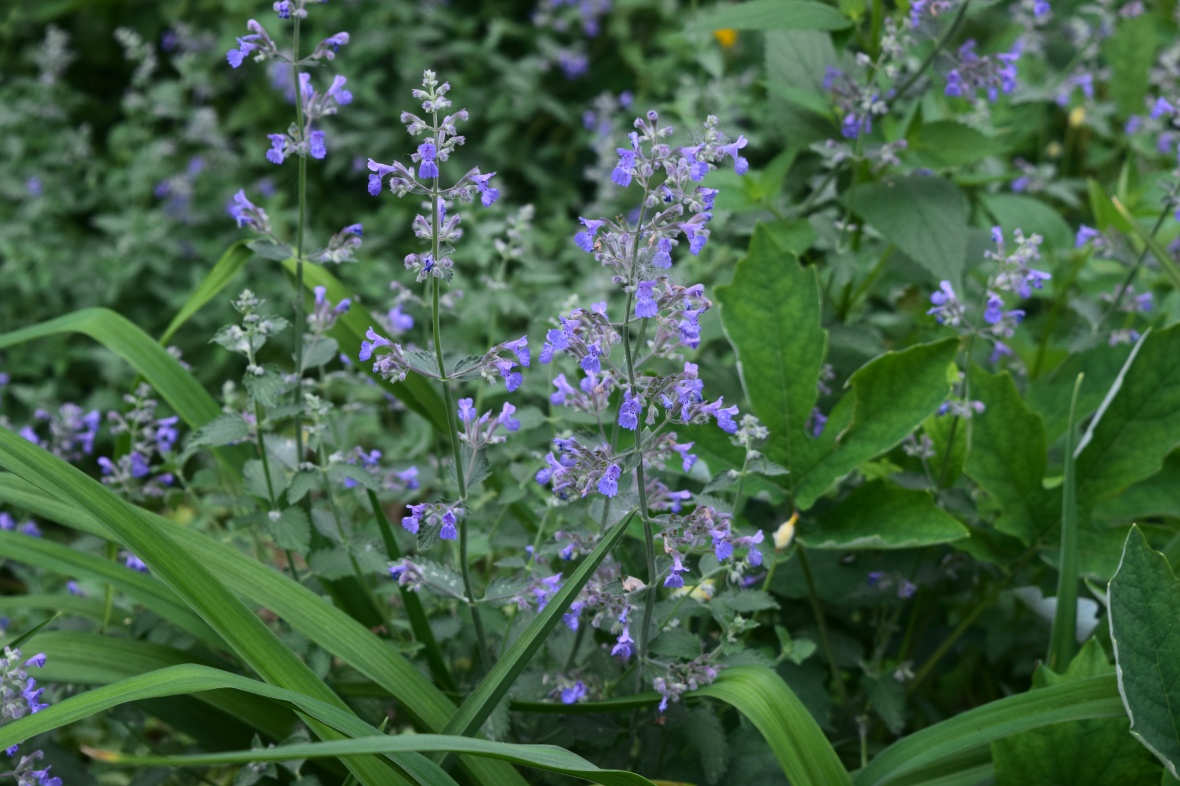 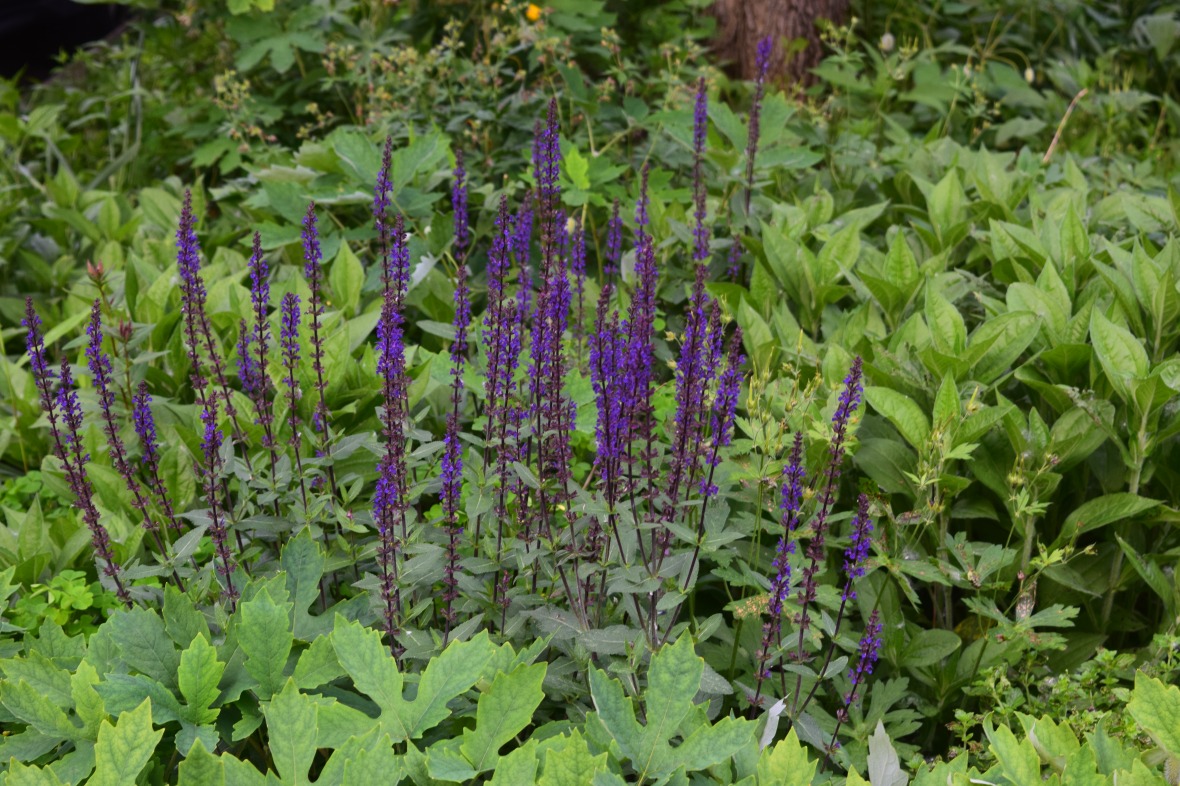 At one point I was inspired by the Lurie Garden to have my own River of Salvia. It was more of a Puddle of Salvia, which taught me about the importance of adequate space for pulling off certain effects. I ended up moving the Salvia (S. nemerosa ‘Caradonna’ and S. sylvestris ‘May Night’) around the front garden, two plants here and three plants there. They’re good plants, but much more satisfying when massed.

Initially Geranium ‘Rozanne’ did not grow well for me, but I gave it a second chance. Now I have several scattered around the beds of the Front Garden, and they are performing pretty well. You could almost call them a climbing Geranium, the way they clamber up among other plants. The one above has been given a bit of discrete support.

I like looking closely at the darker violet of the nectar guides. 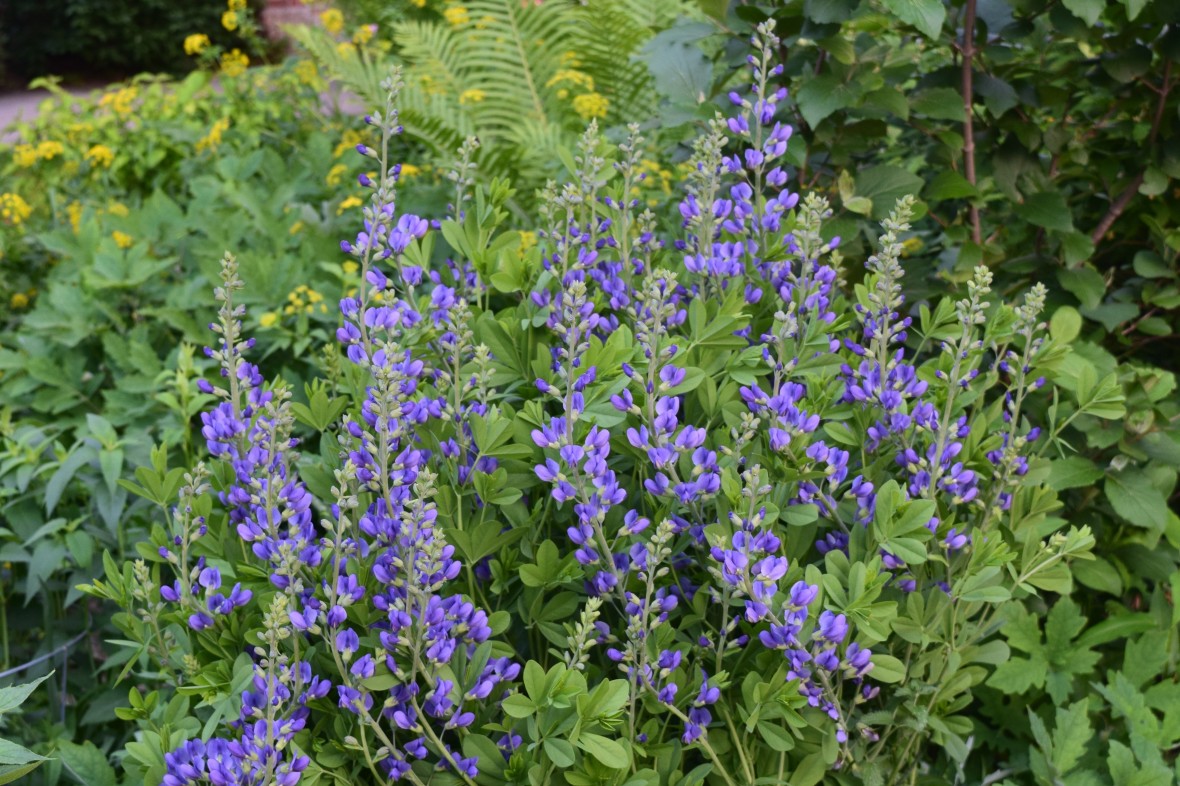 And now for something completely different. Unless you reside on another planet, you’re aware of the Trump administration’s sickening policy of separating migrant children from their parents. The President’s new Executive Order will not put an end to the cruelty. Rallies in support of keeping migrant families together will take place around the country on June 30th.

To learn about the rally closest to you, follow this link. I hope lots of people raise their voices against this barbaric policy. But when we need to calm ourselves, we can take deep breaths and look at the blue flowers.

51 Comments on “Blue Days In The Garden”