Posted on March 7, 2018 by gardeninacity

Last October I planted 140 Daffodils, 200 Tulips, and 250 Crocuses in pots. The 12 pots planted with Daffodils were given compost for insulation over winter. The Tulips and Crocuses were planted in another 12 containers and covered with wood mulch. I didn’t bother to cover the tops of the Daffodil containers because critters don’t like to eat Daffodils.

Now that March is upon us, the moment of truth has begun. This past weekend I uncovered the Tulip/Crocus containers and moved them out to the front of the house.

Here’s one positive thing: the wood mulch deterred squirrels from digging into the pots in search of tasty bulbs (I initially did sprinkle the mulch with animal deterrent). In all 12 containers I saw a total of one squirrel hole. I don’t know, maybe the squirrels around here are lazy.

Also, there didn’t seem to be any critters nesting in the mulch over winter. Gardeners 2, Critters 0. Of course, it was quite a chore to spread the wood mulch over the borders in the back garden once they were no longer needed for insulating pots. I’m not sure doing that every spring is a realistic possibility.

It’s a good thing I didn’t wait any longer to act, because by Saturday the Crocuses had broken dormancy and sent shoots up out of the planting medium. Instead of sun, though, they found themselves still in the dark under a blanket of mulch. As a result, they looked pale and confused when finally uncovered. However, I’m pretty sure that they will recover. 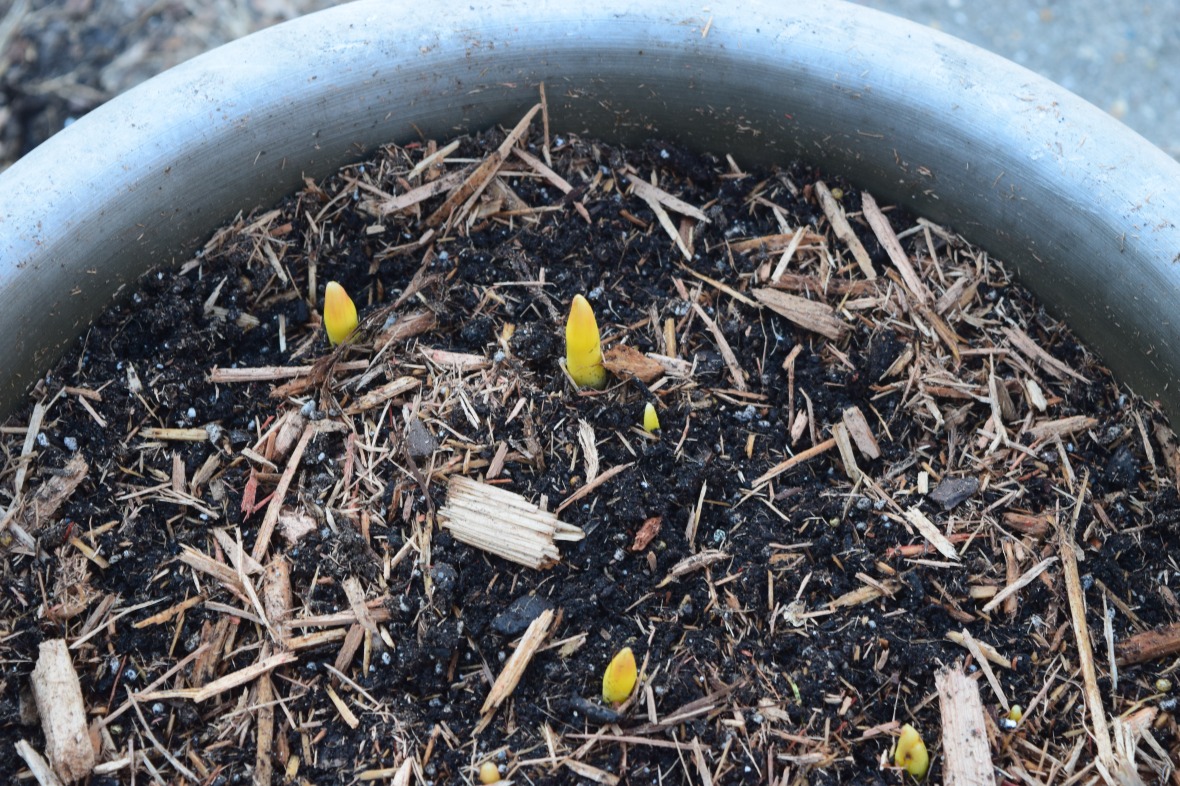 A few containers even featured the tips of overeager Tulips (presumably the Single Early varieties I had planted).

I moved the 12 pots of Tulips, some with and some without Crocuses, out to the front of the house. It was very satisfying to see them returned to their customary places. (Note the snow shovel kept at the ready, just in case.)

As for the Daffodils, I left them where they were. Frankly, it is still too early to tell if there will be a repeat of the Great Daffodil Disaster of 2017. I did see about half a dozen Daffodil shoots, about the size of a thumbnail, poking up out of their containers, so I will remain hopeful.

As for the Daffodils planted in the soil, they are just a couple inches tall at this point. So it could be that their colleagues in pots are slower to emerge.

On the bulbs in containers front, the mood is one of hope, worry, and anxiety. Stay tuned.