There’s a remarkable garden just a few blocks away from where we live. The owner, Pat, is a garden designer and works in the landscape business. She was nice enough to let me come by and take some pictures of the front.

Here’s a view from the street. The Feather Reed Grass (Calamagrostis × acutiflora ‘Karl Foerster’ and Bee Balm (Monarda didyma – probably ‘Raspberry Wine’) are growing in the parkway between sidewalk and street.

And here’s a view from the sidewalk showing the stone path that leads to the front door. The garden surrounds a simple single-story house.

The parkway plantings from the other direction. At this end it’s mostly Common Milkweed (Asclepias syriaca) with some tall Dill (Anethum graveolens) mixed in. The honey-like fragrance of the Milkweed is delightfully strong as you pass by. 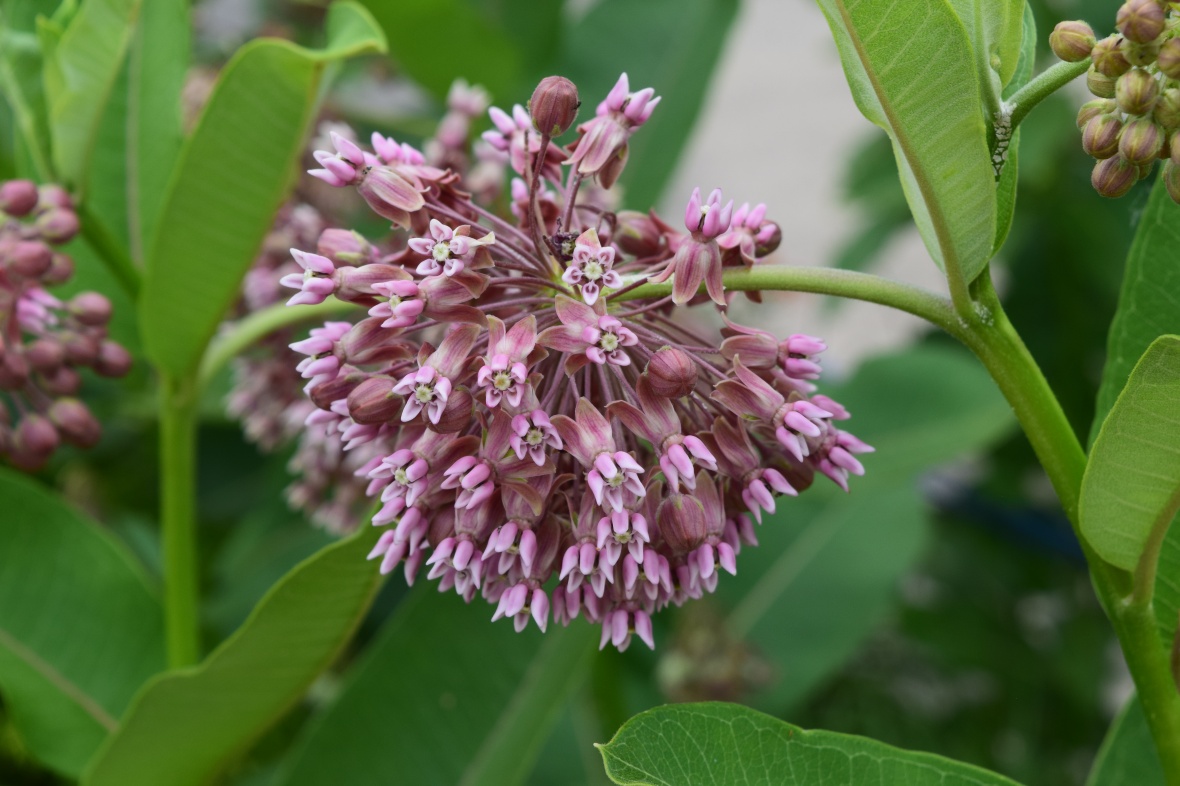 It takes some courage to grow masses of Common Milkweed in front of a suburban home, as people who grow up in the Midwest tend to think of it as an unwanted pest. Also, the seeds with their little parachutes will travel into your neighbors’ yards and self-sow freely. However, I’ve noticed that there’s Common Milkweed in the flower beds of some of the nearby houses. Perhaps the virtues of this plant have become more widely accepted.

On one property line Pat uses the Common Milkweed as a hedge.

Here’s a view of the plantings along the sidewalk. Drifts of Butterflyweed (A. tuberosa), Shasta Daisies (Leucanthemum x superbum), Purple Coneflower (Echinacea purpurea), and other plants make for an exciting tapestry.

This is a view of the front from the opposite end of the sidewalk. There are several gigantic Blue Wild Indigo (Baptisia australis) placed carefully in strategic spots around this garden.

Where the sidewalk meets the path to the front door. 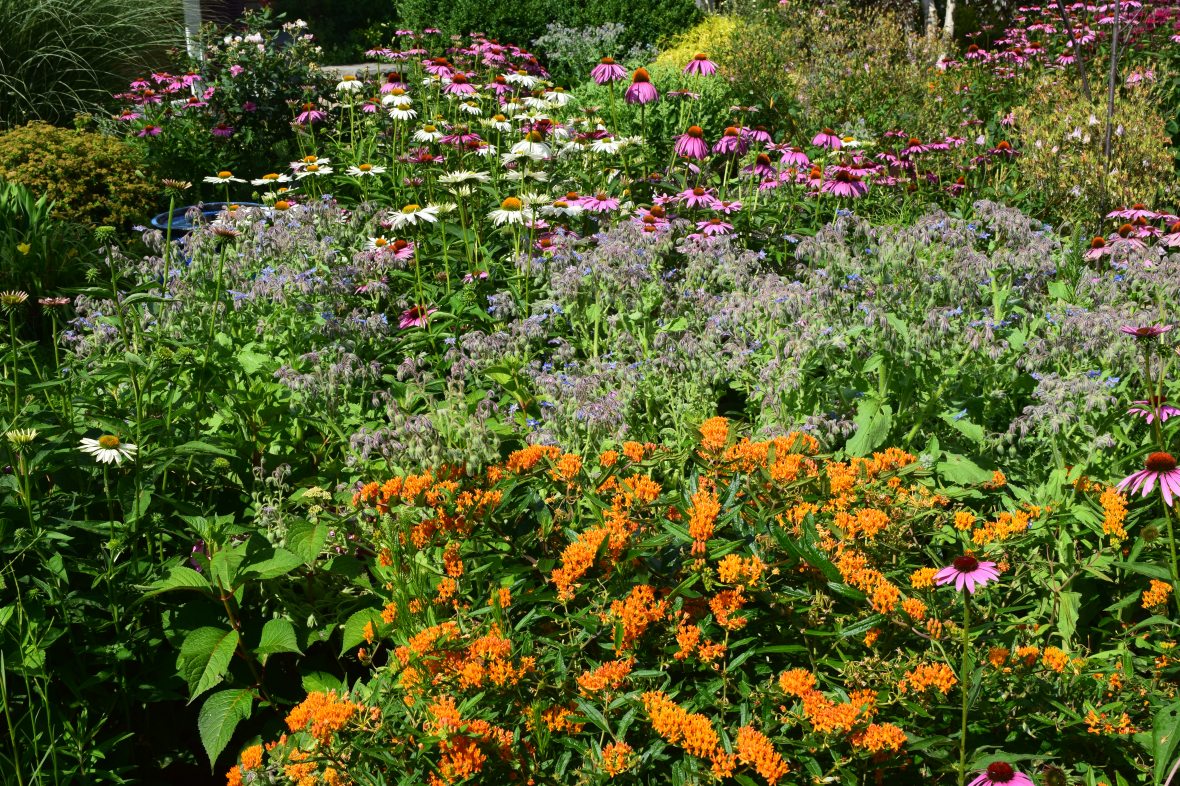 I really like how Borage (Borago officinalis) has been allowed to self-sow and fill in among the perennials.

Just a few of these petite lavender-pink Columbines were blooming when I visited.

The Columbine plants themselves were enormous. Pat wasn’t sure of the variety, but she offered us some seeds.

I don’t remember the name of this Birch with the purple leaves. However, Pat says it has birch borers so it won’t be around too much longer.

This blue fountain with its shallow water is really well-designed for thirsty birds. Pollinators were buzzing all over this garden. 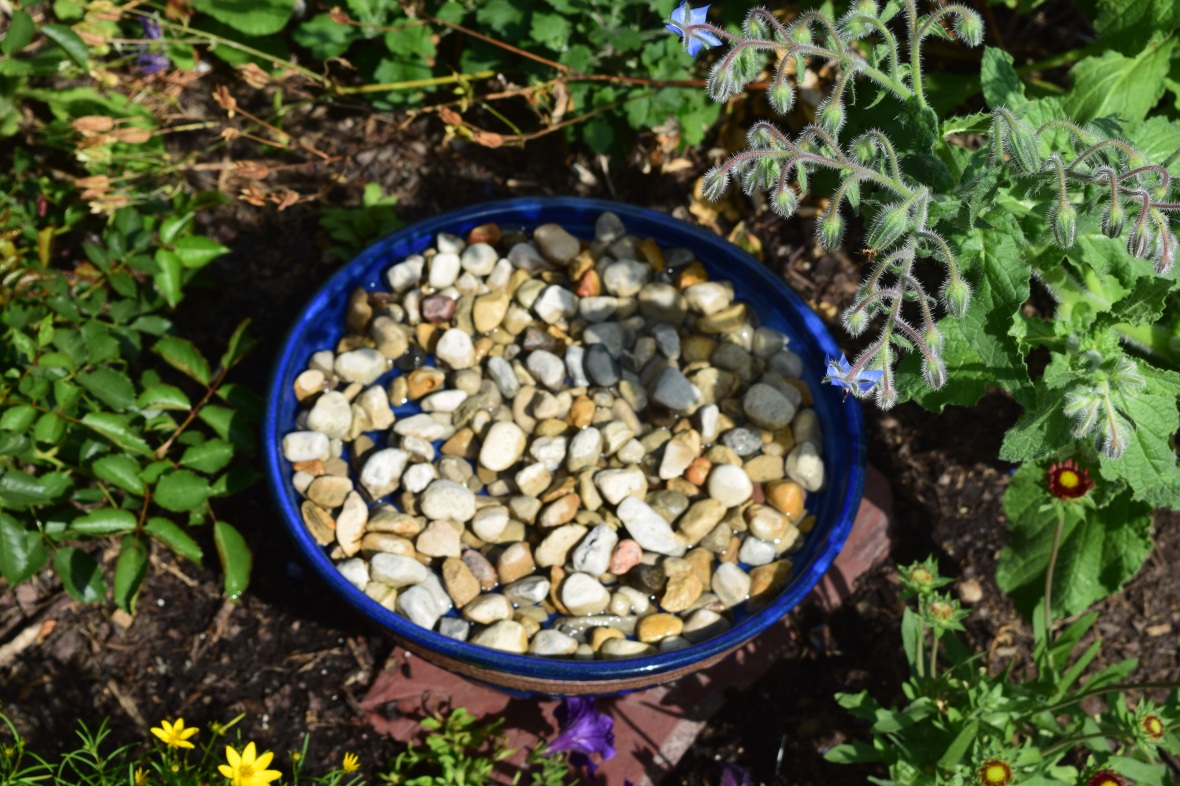 This miniature wading pool provides bees with a safe place to get a sip of water.

Looking back toward the sidewalk from in front of the house. That shrub in the center is a Common Lilac (Syringa vulgaris).

This grass (not sure of the name) looks like green fireworks. 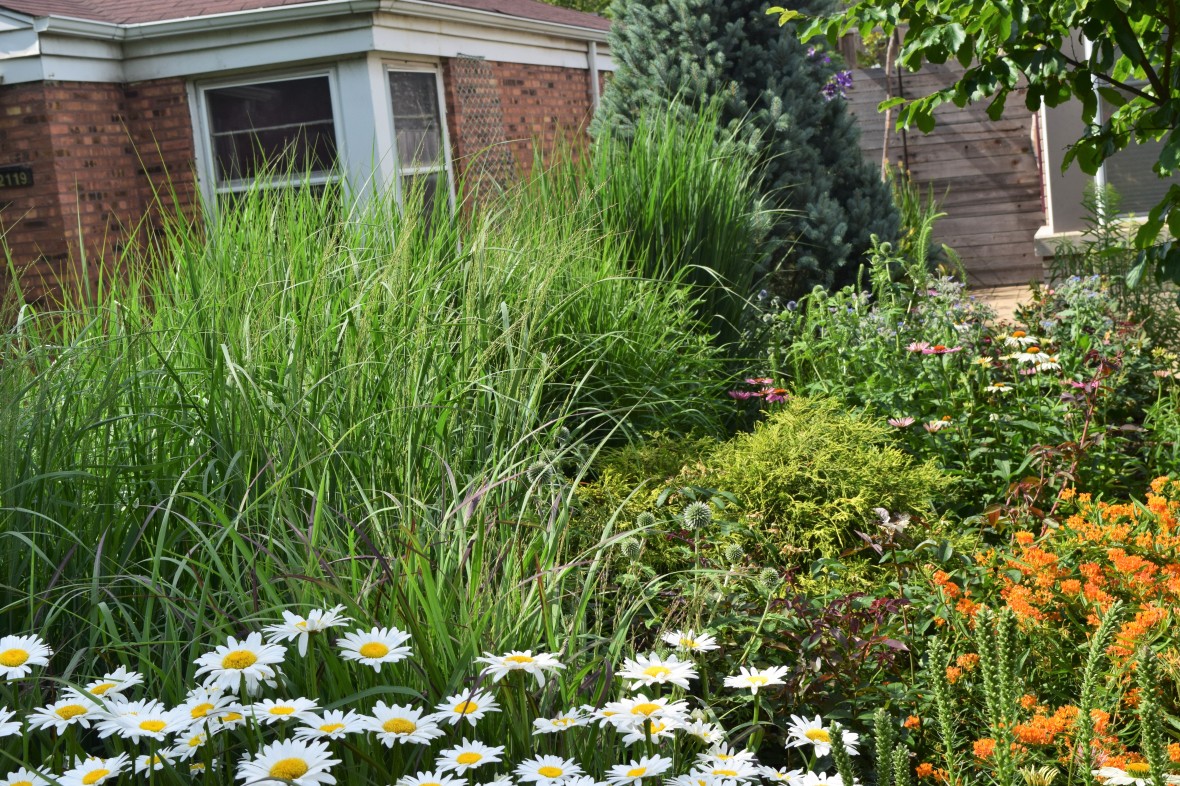 A hedge of tall grasses marks the west border of the property.

Another view from in front of the house. This may give a better sense of how Borage serves as a filler – something that is giving me ideas. Also, I really like this mix of Purple Coneflower varieties. Yes, I know I’ve said nasty things about Echinacea cultivars but these are more acceptable to me because they don’t go too far from the plant’s natural color.

It’s inspiring to come across this sort of garden in my own neighborhood. It’s nice to know another person who has similar ideas about what makes a beautiful property. Thanks for letting me take the pictures, Pat, and sorry about disturbing your dogs.

46 Comments on “A Neighbor’s Garden”