Virtue Rewarded and a Grass Divided

So the bad news is that once again there are Fourlined Plant Bugs (FPBs) in the garden. 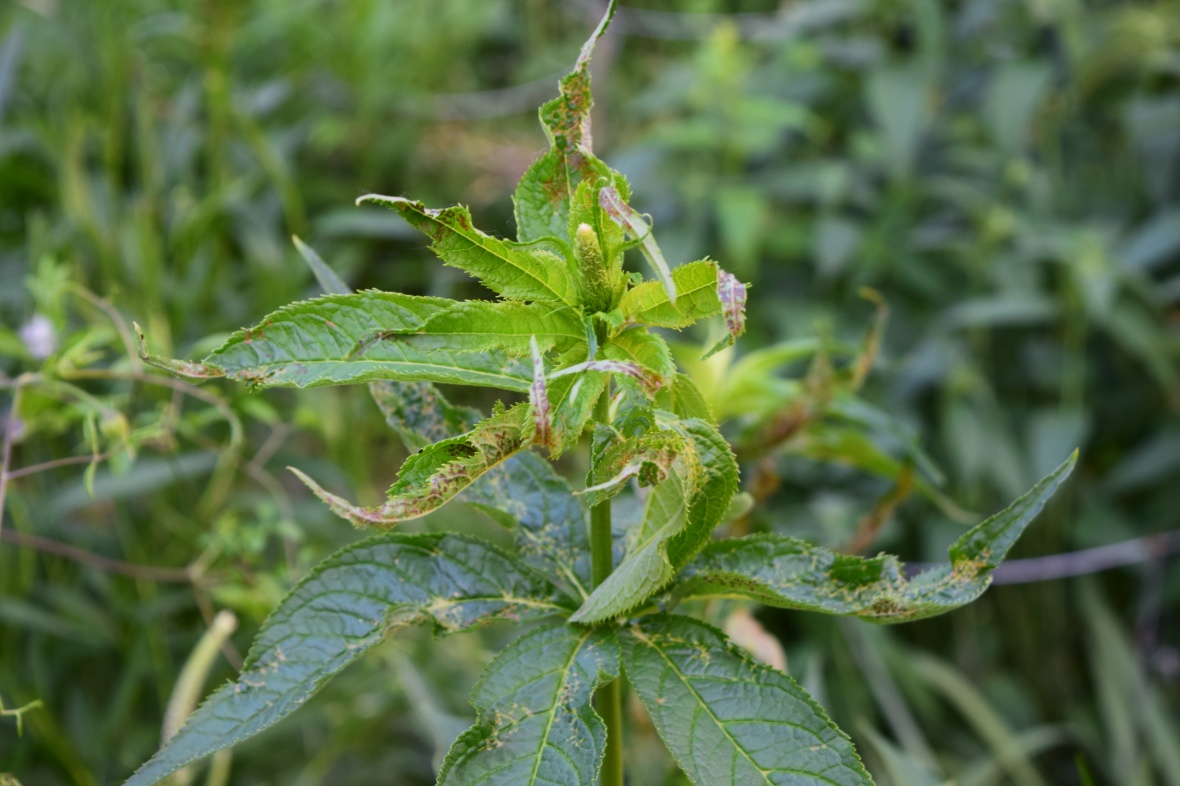 These bugs are eclectic in their plant preferences. In my garden, though, they seem to go particularly hard after members of the mint family such as Culver’s Root (Veronicastrum virginicum) and Anise Hyssop (Agastache foeniculum).

The first couple of years after the FPBs arrived, those two plants were so chewed up that they hardly bloomed at all (they weren’t killed, though). I think they were vulnerable because they bloom in early summer. That’s when the FPBs are most active – by mid-summer they’ve laid their eggs and disappeared for the remainder of the year.

The good news this year is that the FPB numbers are greatly diminished, as is the damage they are doing – much less noticeable. The Culver’s Root and Anise Hyssop should bloom pretty normally this year.

I like to think this is an example of virtue rewarded. Despite my distress at the lost blooms, I refrained from using insecticides or even insecticidal soap. Excessive numbers of any given insect pest are supposed to draw predators who will bring the pest’s population into balance. I hope that’s what happened here – though apparently there isn’t a lot known about the predators of Fourlined Plant Bugs.

And did I mention I finally divided those two big Switchgrass (Panicum virgatum) clumps? Switchgrass needs only infrequent division, but these were planted over ten years ago.  I was hoping I could put it off for another year. However, when I saw the grass coming up in a ring around a dead center, I knew that action was required.

It wasn’t a pretty process. The clumps had a diameter of about 30 inches and weren’t coming up without a fight. They were pretty awkward to handle, and I ended up sitting them on my knee like a favorite grandchild (not best practices, I know). I used my folding saw to cut the clumps into divisions.

After planting the most vigorous-looking sections, I was taken aback by all the empty space around them. I think I’ll mulch the open area and let the Switchgrass and its expansionist neighbors (looking at you, Asters and Bee Balm) do their thing.

Also, I noticed that the replanted clumps started getting crispy at the tips when we had a sudden heat wave and a dry spell. The poor guys have lost most of their roots, so I started watering them by hand.

Let’s close on something more pleasant, shall we?

There’s an old Weigela of some kind in the back garden that we inherited from the former owners. It was on its last legs when we moved here. I pruned it and gave it some compost, and now its blooming pretty well, even though it gets only part sun. 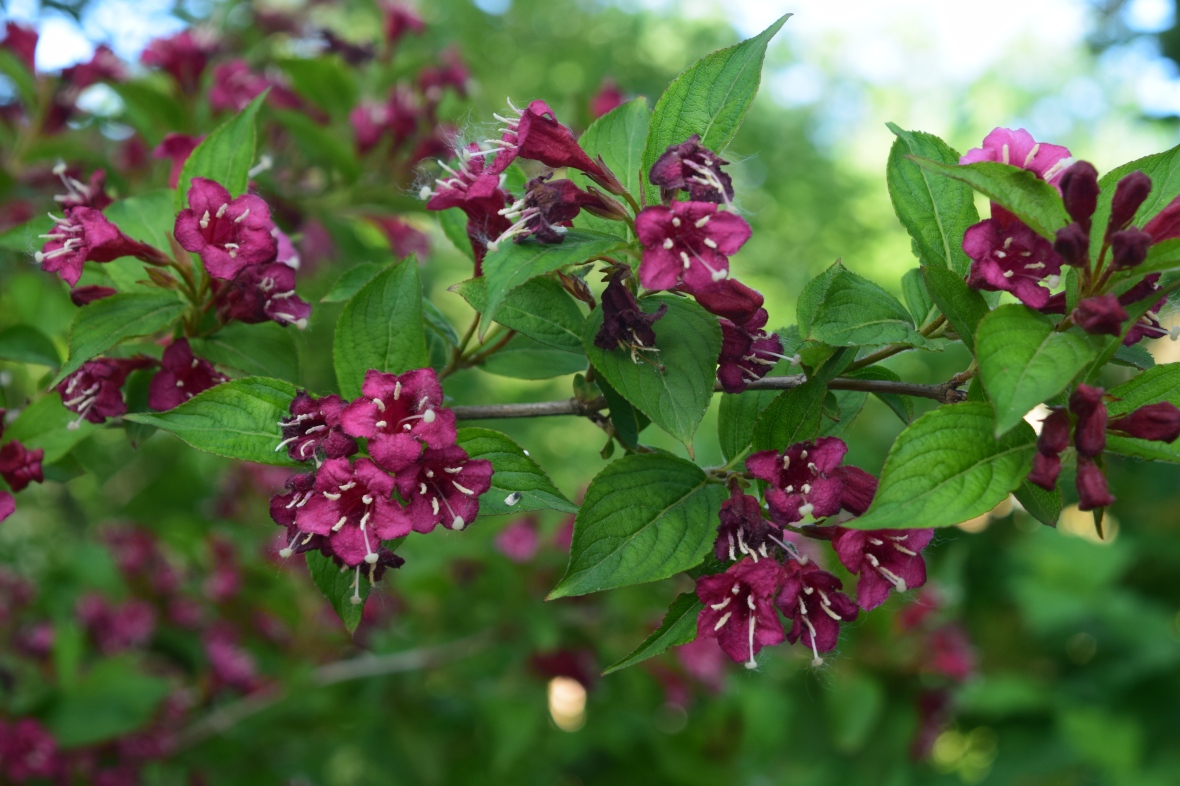 It still seems out of place in our garden, somehow, but I’ve grown fond of it.

Another shrub that bloomed very well this spring was the American Cranberrybush (Viburnum opulus var. americanum). I think its lacecap flowers are some of the nicest of any Viburnum, though sadly they are not fragrant. 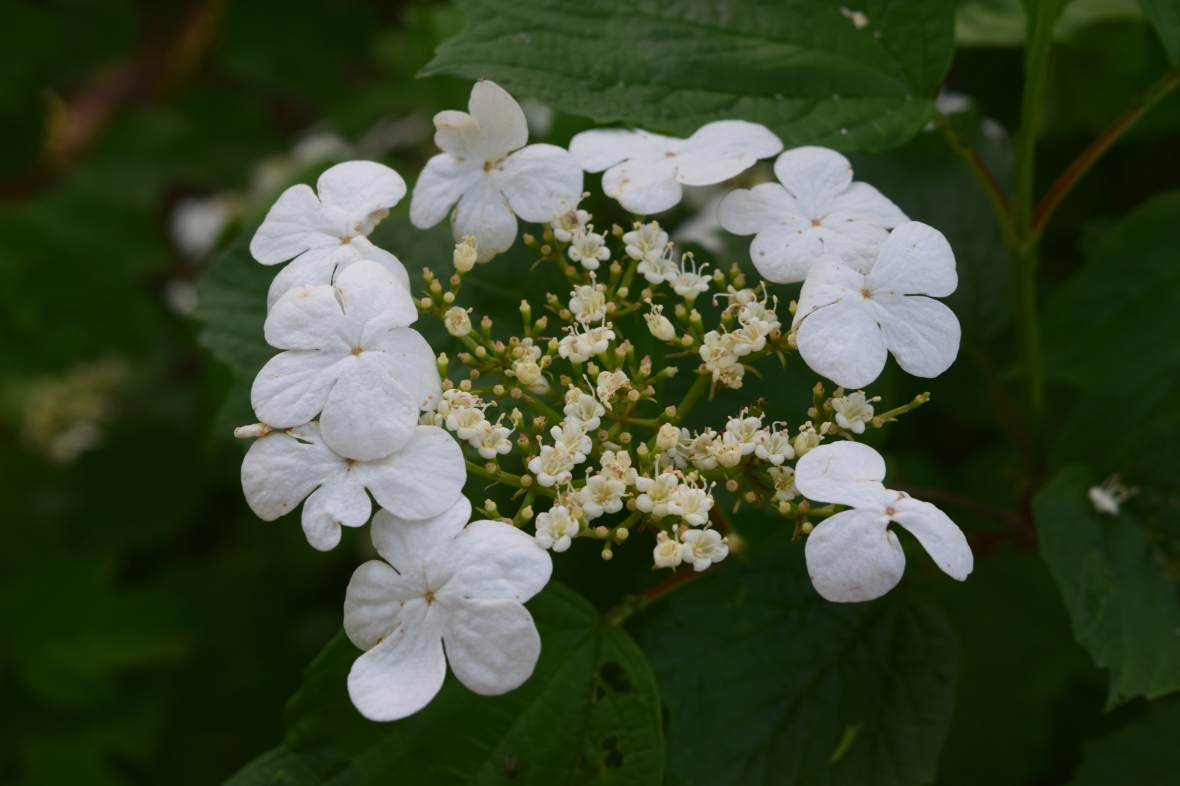 Those tiny florets in the center are fertile, while the larger ones around the outside are infertile. I have the straight species plus the varieties ‘Wentworth’ and ‘Redwing’. Though ‘Wentworth’ is supposed to produce lots of berries, this year it’s had fewer flowers than any of its cousins.

That’s all for now. I’m happy that I won’t have to divide that Switchgrass again for at least another ten years.

← More Partners for Golden Alexander
The Summer Containers Are Planted →

29 Comments on “Virtue Rewarded and a Grass Divided”