The Garden at Dumbarton Oaks

So back in April Judy and I visited the garden at Dumbarton Oaks in the Georgetown section of DC. We were visiting our friends who live outside Baltimore and wanted to see this garden in part because it would be closed for almost a year starting in July.

Dumbarton Oaks as it exists today was created by Mildred and Robert Bliss. Robert was an American diplomat, but it was Mildred who took the lead in the garden. They bought the property in 1920, and over the next decade Mildred worked with the garden designer Beatrix Farrand. 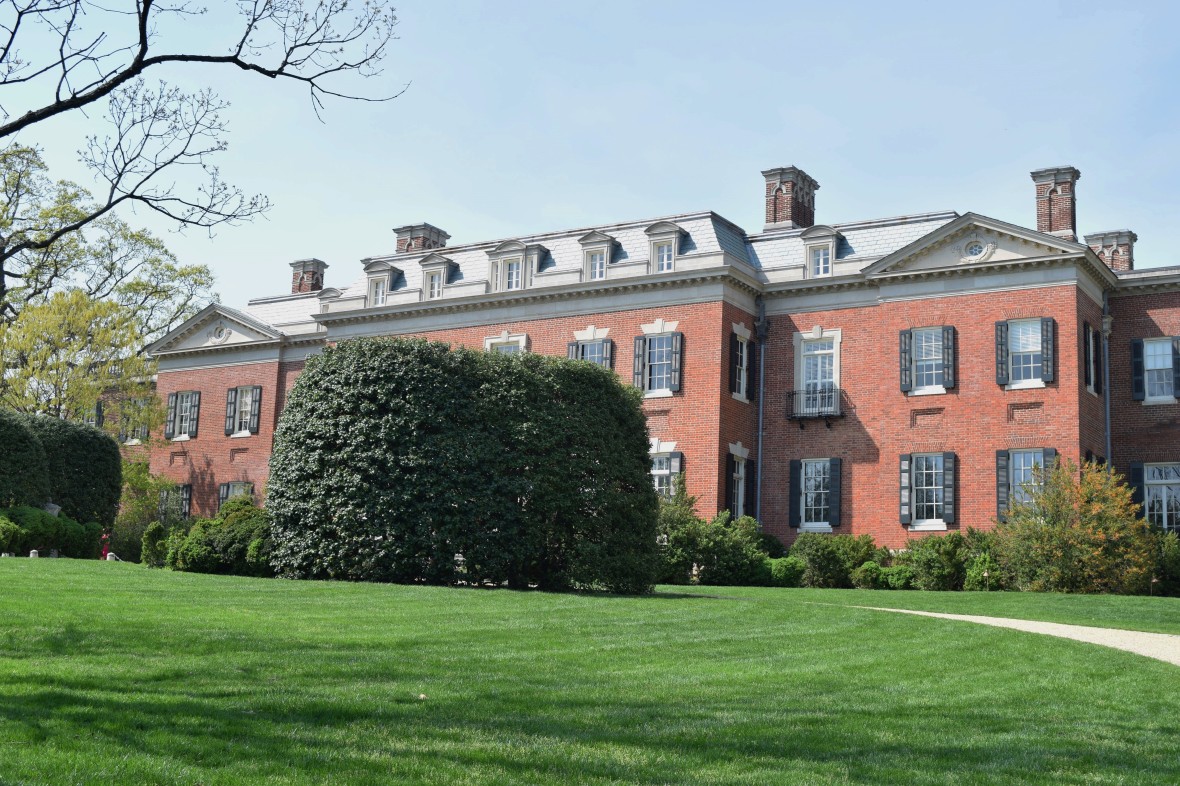 The property was handed over to Harvard University in 1940. We entered through the South Lawn, which was unremarkable.

Things started to get interesting just outside the house in the Beech Terrace. This is an American Beech (Fagus grandiflora) that was planted in 1948 after the original tree died.

The property around the house is mostly sloping, and so the garden is organized into a series of terraces.

The Chinese Wisteria (Wisteria sinensis) was coming into full bloom at the time of our visit. We were always going up and sticking our noses into the fragrant pea-like flowers.

There were lots of Tulips blooming in the Fountain Terrace. 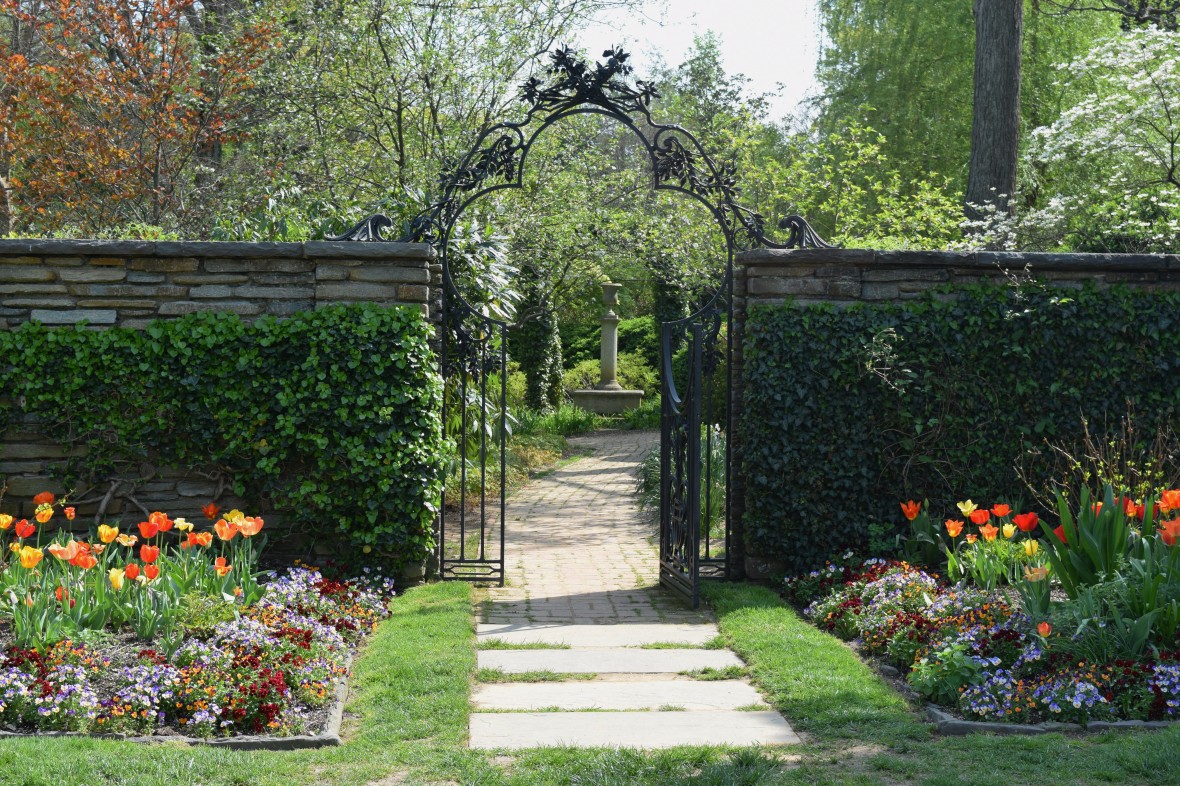 I liked this arched iron gate.

The Arbor Terrace is all about places to sit, surrounded by fragrant herbs. The arbor is supposed to be covered with more Wisteria, but I guess it needed to be replaced. I liked the little orange tree in a pot. 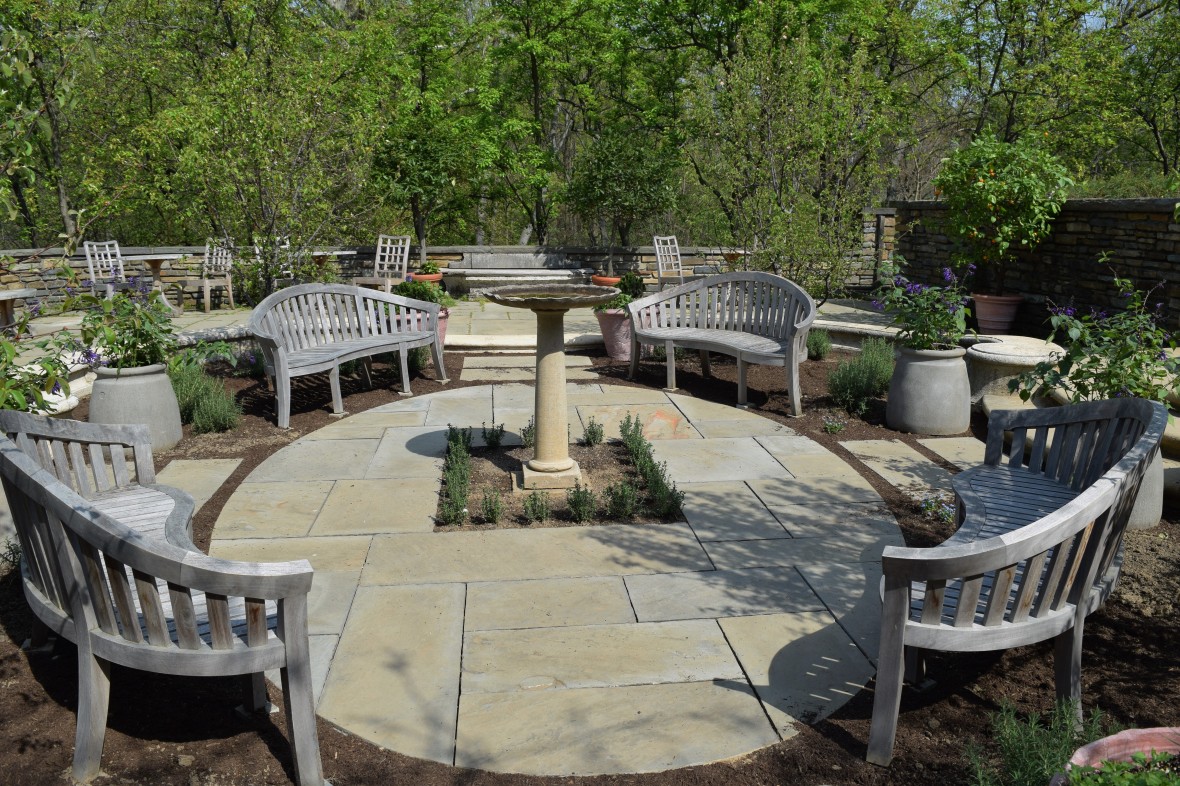 Here’s a spot for enjoying the sunshine and perhaps some conversation. 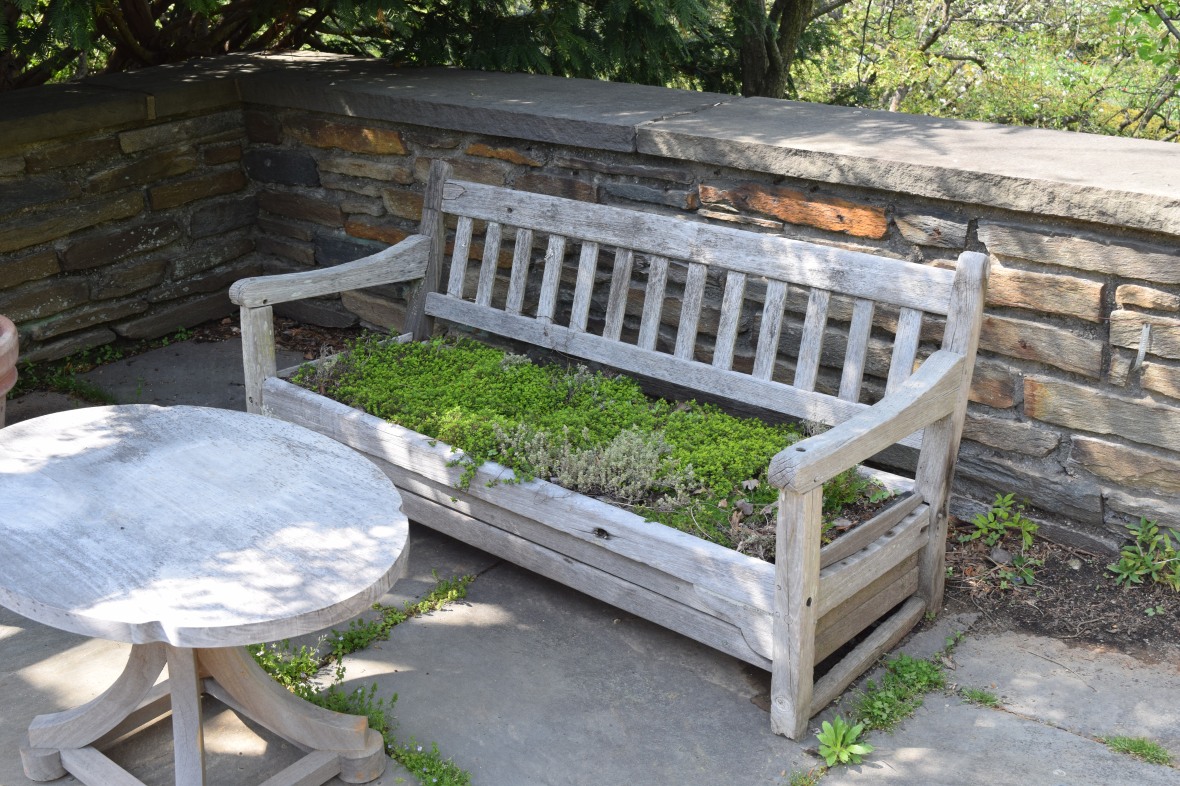 What a great herb planter. Too bad you can’t really sit on it. 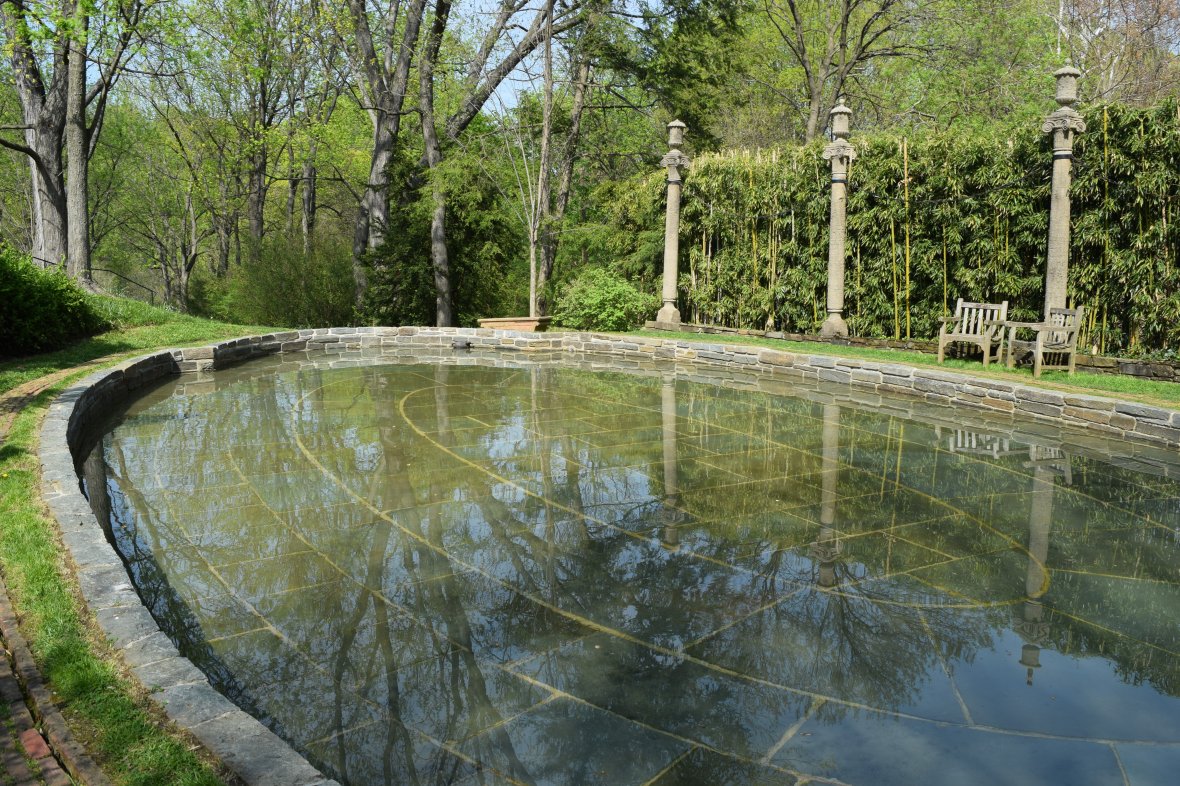 This is called the Lovers’ Lane Pool, though I don’t know why. 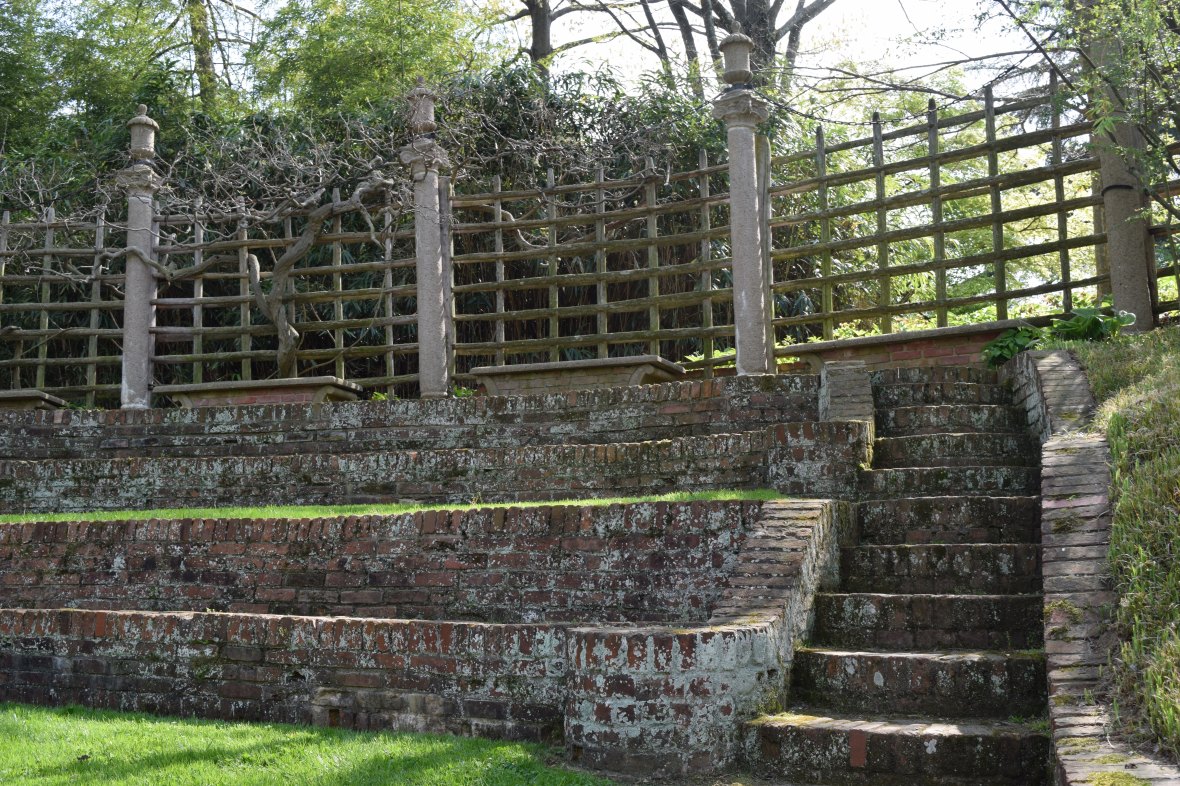 There’s a brick amphitheater at one end.

An orchard and small meadow lie beyond the pool. The meadow is planted in Daffodils and various small spring bulbs, but most of the blooms had gone over already.

Beyond the orchard we found the kitchen gardens, with spring vegetables newly planted. 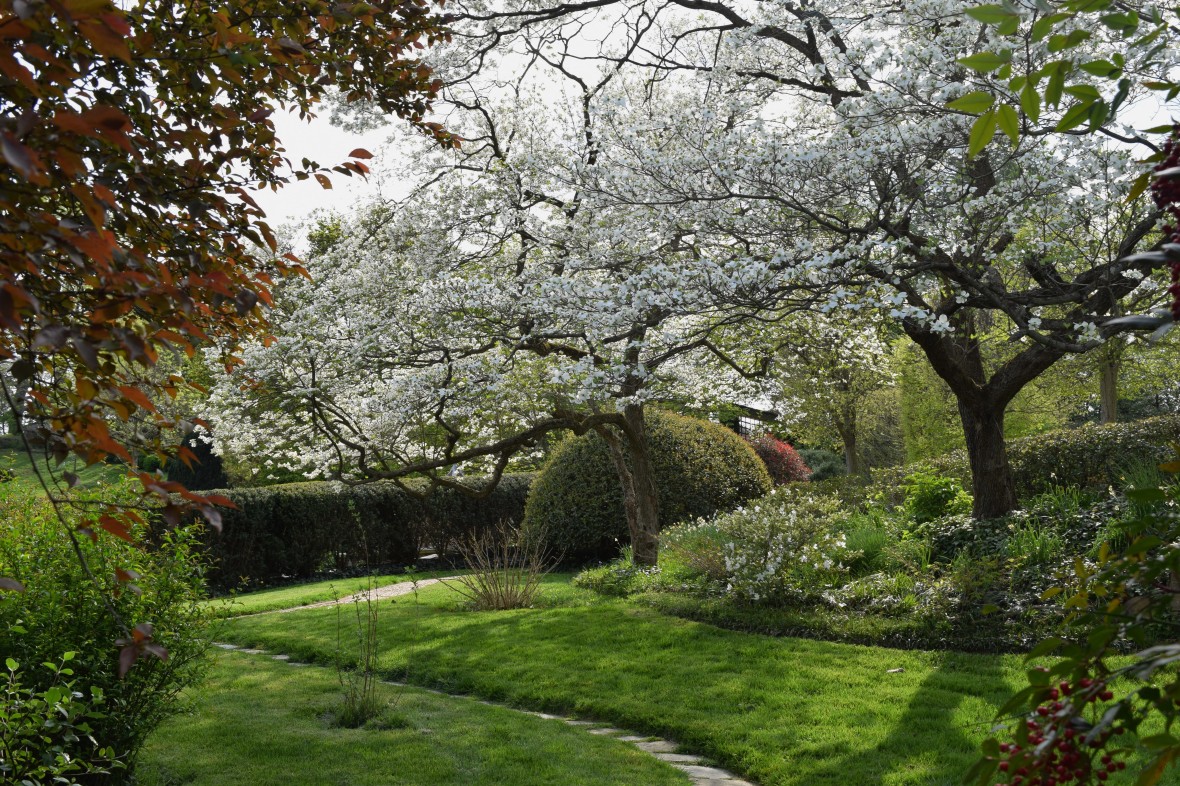 We admired some large Flowering Dogwoods (Cornus florida) as we strolled the grounds.

The Pebble Garden has an extensive mosaic of small stones surrounded by Wisteria-covered walls.

Here’s a view from the terrace above. The brown thing is a sheaf of wheat.

And finally, a couple more pictures of the Wisteria in bloom. 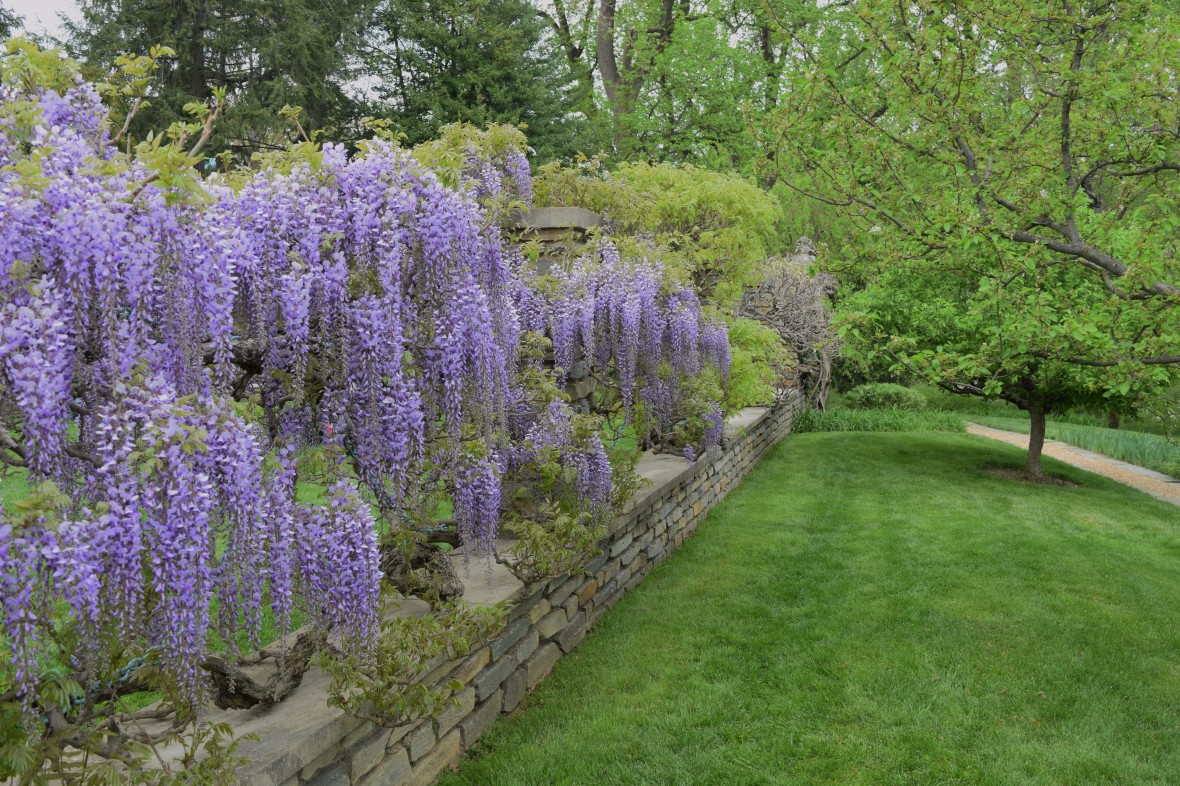 Dumbarton Oaks is a mere two miles from the White House. I’d like to think that a daily stroll here would calm the disordered minds currently in charge of our country. On second thought, Trump would probably try to turn it into a golf course.

← The Heartbreak of Clematis Wilt
A Happy Clematis Recovery →

28 Comments on “The Garden at Dumbarton Oaks”