Posted on February 23, 2017 by gardeninacity

An Unexpected Pocket of Urban Nature

This past weekend was uncannily mild and sunny. Judy and I decided to visit the West Ridge Nature Preserve, a chunk of land recently detached from Rosehill Cemetery. We had been hearing about this place, but had never been there. 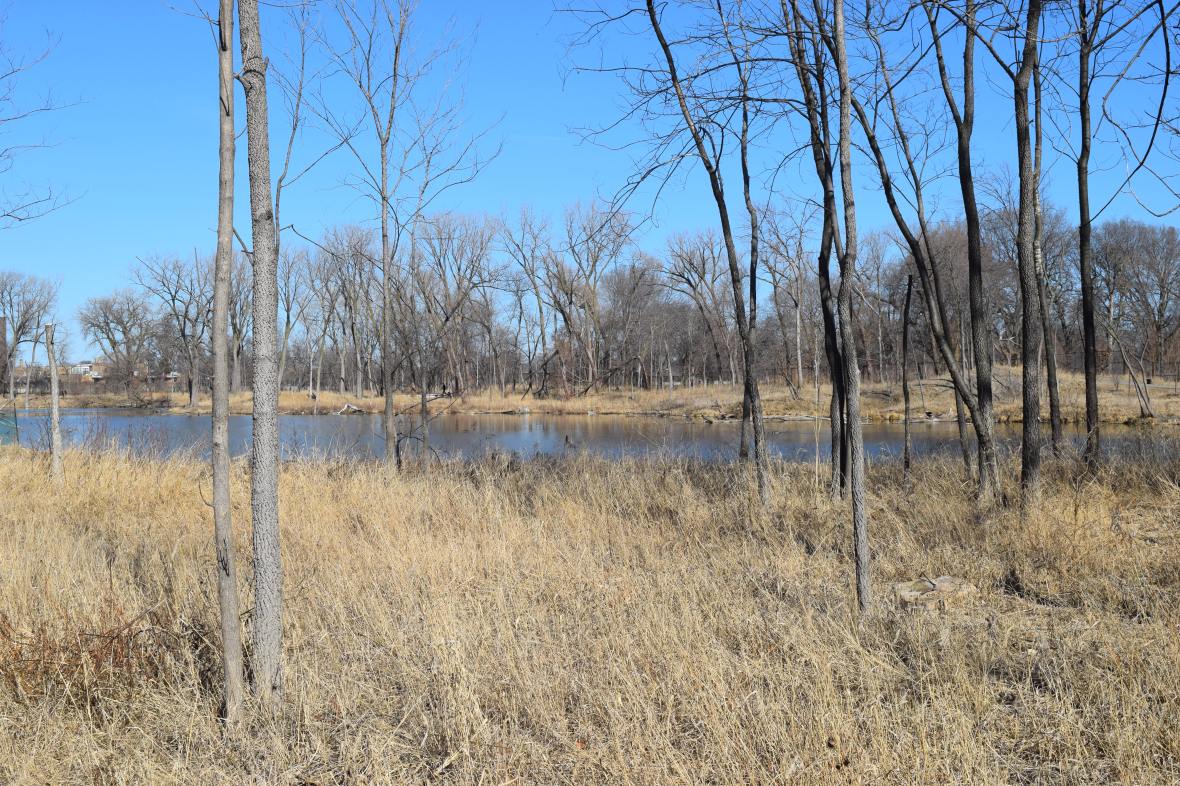 West Ridge Nature Preserve consists of 24 acres in what had been a wild, unused corner of the cemetery.

About four acres are covered by a pond, and there are areas of wetland as well. People had been birding here for years, as the pond attracts many migrants.

In 2011 the land was transferred to the Chicago Park District, and work began on its restoration as a natural area. Fortunately there were already many large shade trees to provide a framework. Native grasses, wildflowers, shrubs and small trees were planted. 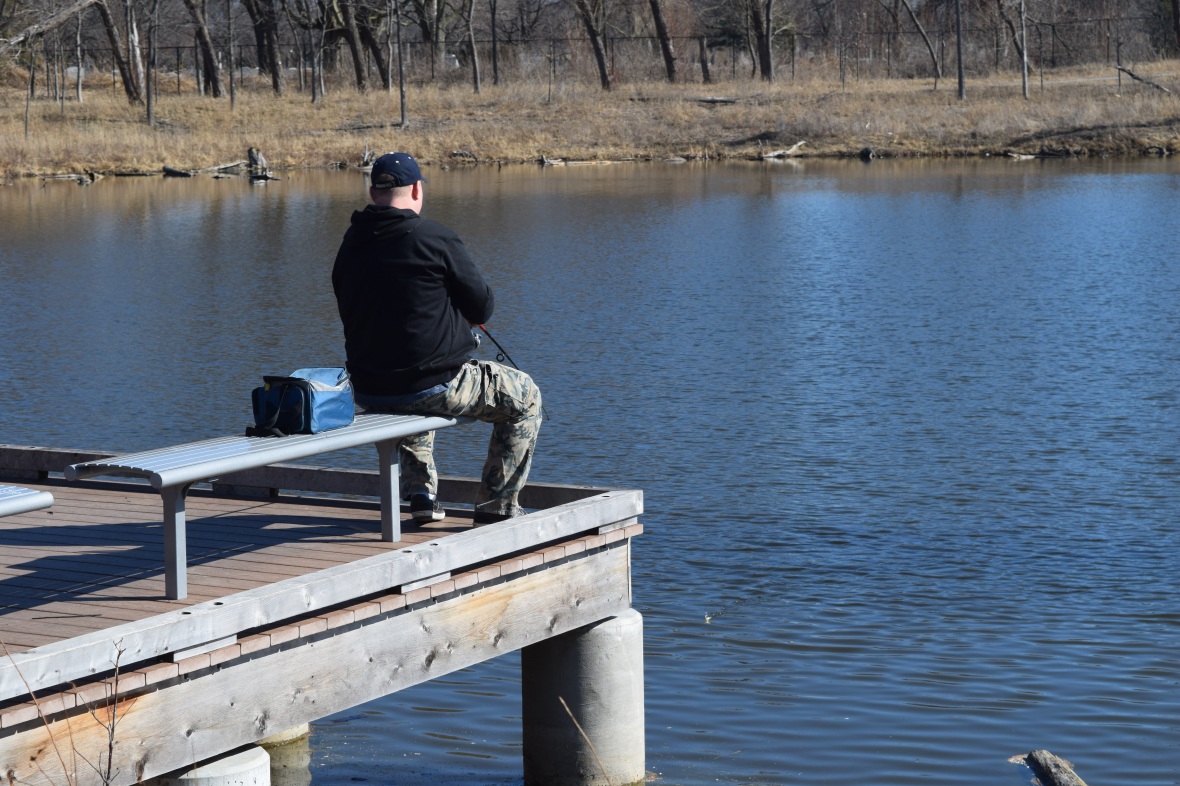 Apparently there is fishing here as well, though we didn’t see this guy catching anything.

There were a number of nesting boxes of various kinds. Bluebirds, Kingfishers, Red-Tailed and Cooper’s Hawks, Summer Tanagers, Kestrels, Orchard Orioles, and a variety of warblers are among the birds sighted here.

This Nature Preserve is located along Western Avenue on the Far North Side of Chicago. Western is not an especially charming avenue. It used to be known for its car dealerships, but that was a bygone day. Other businesses have moved in, and this is still a commercial street with lots of traffic and not much visual appeal.

Even so, the location of this park is fortuitous, as this part of the city has a shortage of green space. There were many young families and retirees enjoying the park when we were there.

From inside you can hear and see the traffic as well as the surrounding commercial buildings. With time the shrubs and small trees planted along the outer fence will provide some screening. 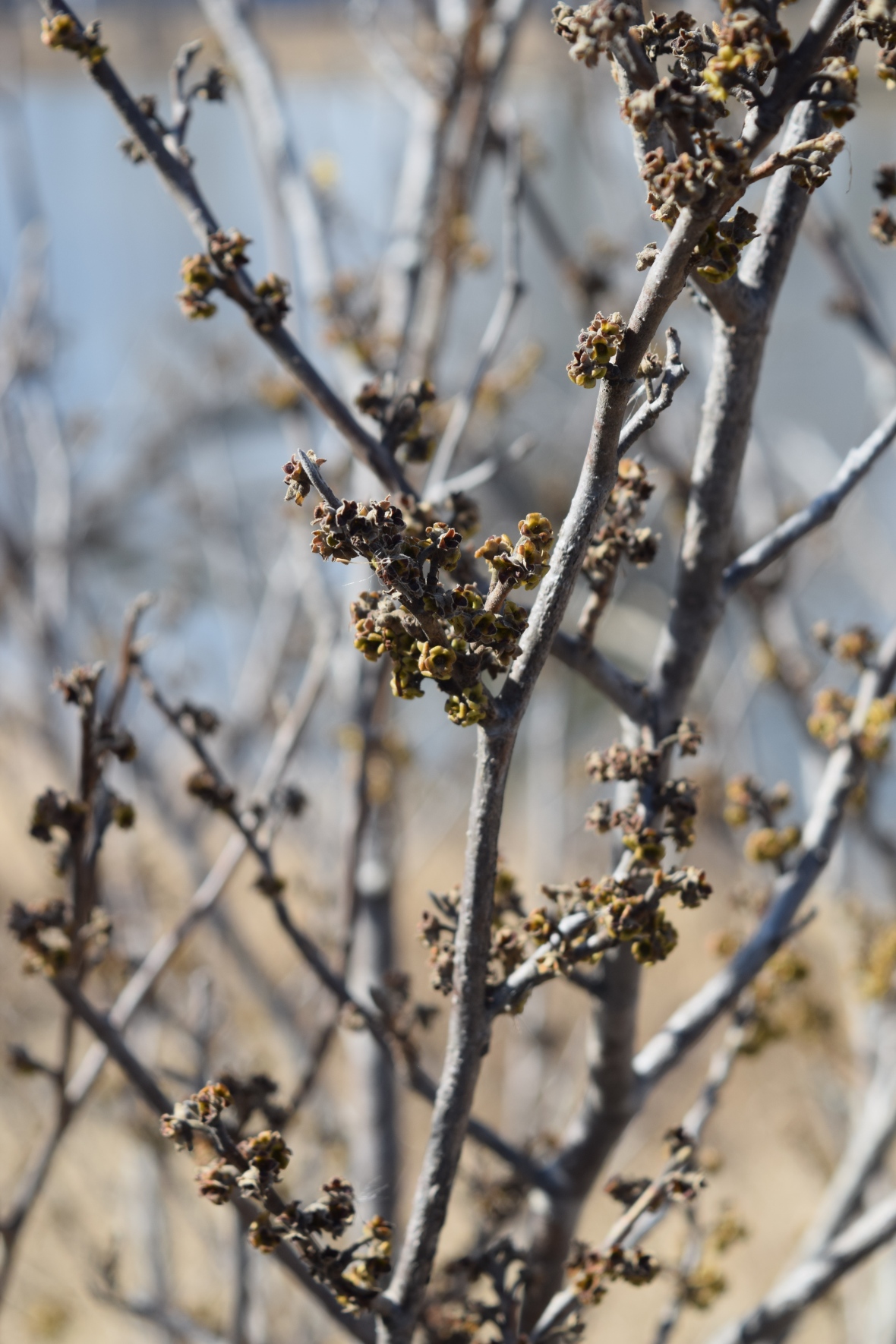 We saw nothing in bloom during our walk, but there was a grove of young Witch Hazels (Hamamelis vernalis) that were just about to flower.

There were lots of ducks and other aquatic birds around the shallower southern end of the pond. Other aquatic birds making their home here (at least during the warm weather) include three species of Heron and Double Breasted Cormorants.

People are supposed to stay on the paths and no dogs are allowed at the West Ridge Nature Preserve. Fortunately, an area has been set aside as a children’s playground. It features rustic swings, seesaws, and tents made with tree saplings.

There’s also a “Story Walk”, a path through an area of woods with kid-friendly signs.

Now I wonder how this tree came to be shaped like this, particularly the twisted-looking trunk.

Here’s an area that is more open and elevated, I would think dryer prairie plants could grow here.

After our walk, we went back out onto Western Avenue. We were hungry for lunch, so we gave this place a try. The bartender was Bosnian, the cook Vietnamese. I had banh mi made with Bosnian grilled sausage, which was delicious.

I’m eagerly looking forward to visiting West Ridge Nature Preserve in the Spring, when the wildflowers bloom and the migrating birds arrive. I hope that this place can continue to thrive for years to come, providing sustenance for both birds and people.

← The Arashiyama Bamboo Forest
A Hawk at the Bird Bath →

49 Comments on “An Unexpected Pocket of Urban Nature”