It’s the middle of October and the garden is getting drowsy, sliding into its annual decline. In fact I was thinking of calling this post Decline and Fall (get it – fall?), but Judy says I use too many puns. 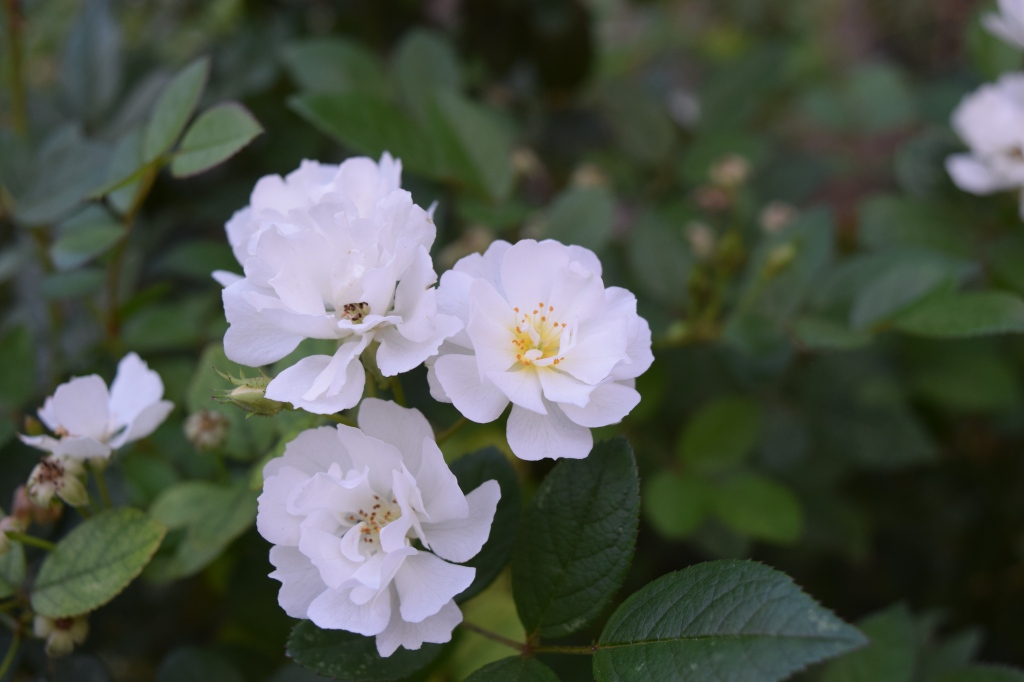 Although, some of the roses are having a late season spurt of energy, particularly our shrub rose ‘Cassie’, which has quite a few flower clusters along with small red hips here and there. The hips don’t really make much of a display, because something eats them before they develop critical mass. 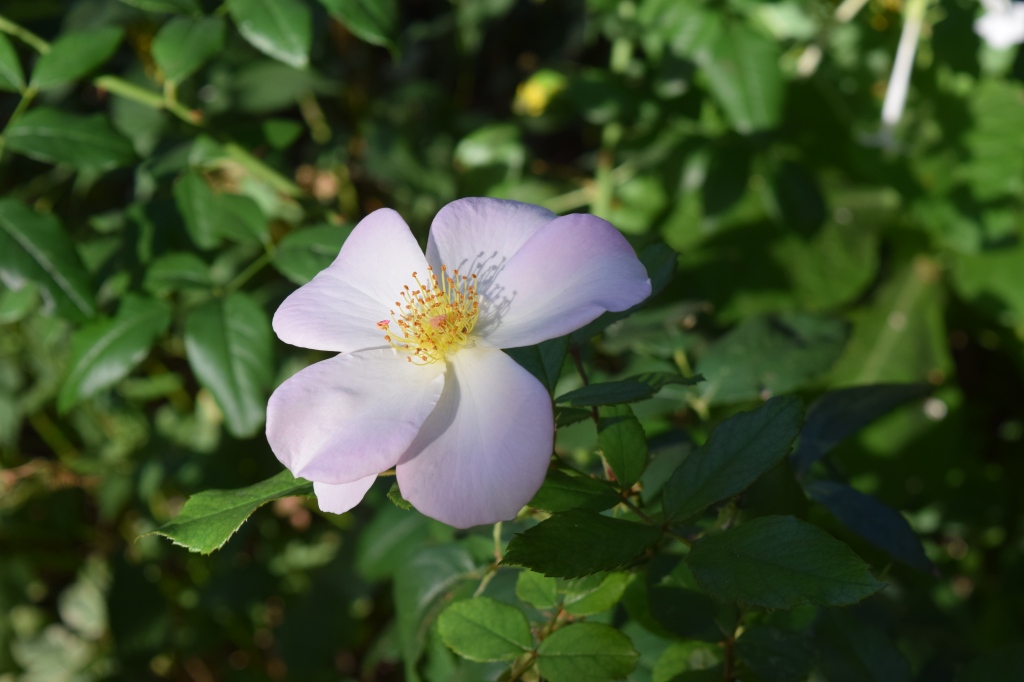 ‘Sallie Holmes’ in the back garden is also putting out a final handful of blooms. 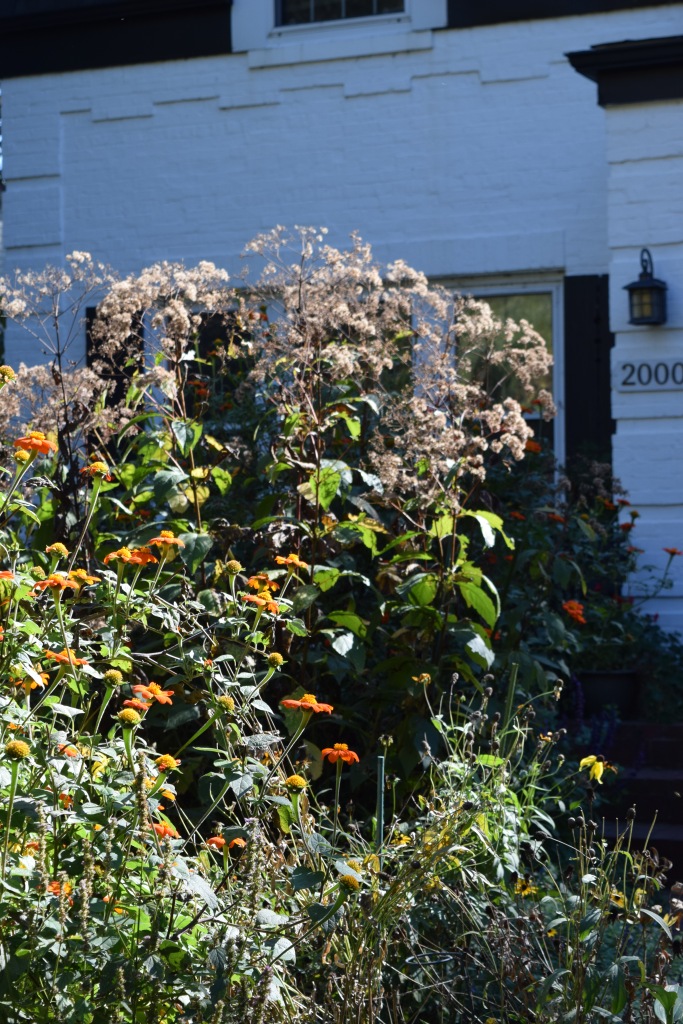 In the front garden, many plants have only seed heads remaining, like these fluffy Joe Pye Weeds (Eutrochium maculatum). October has been a warm month, which is keeping some plants from going dormant – but it’s also been very dry, making beds and borders a bit more shrivelled and crunchy. 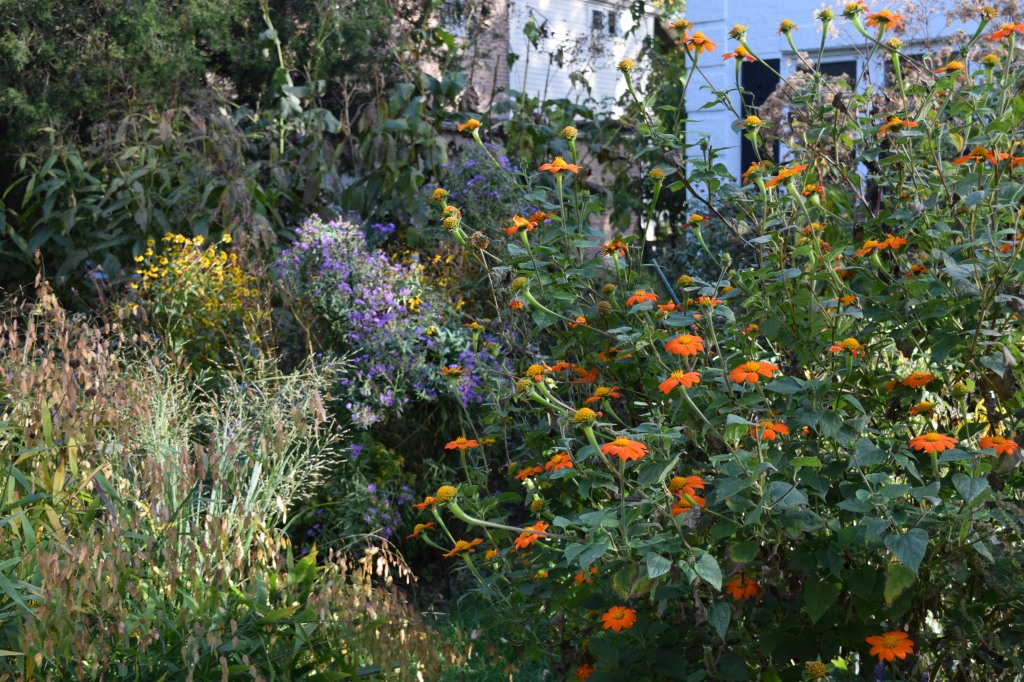 Even so, the Mexican Sunflower (Tithonia rotundifolia) is still blooming, even though I gave up deadheading at the beginning of October. Sadly the seeds are not hardy here, but they do attract some Cardinals and Goldfinches. Butterflies are no longer seen, but bumblebees are still plentiful. 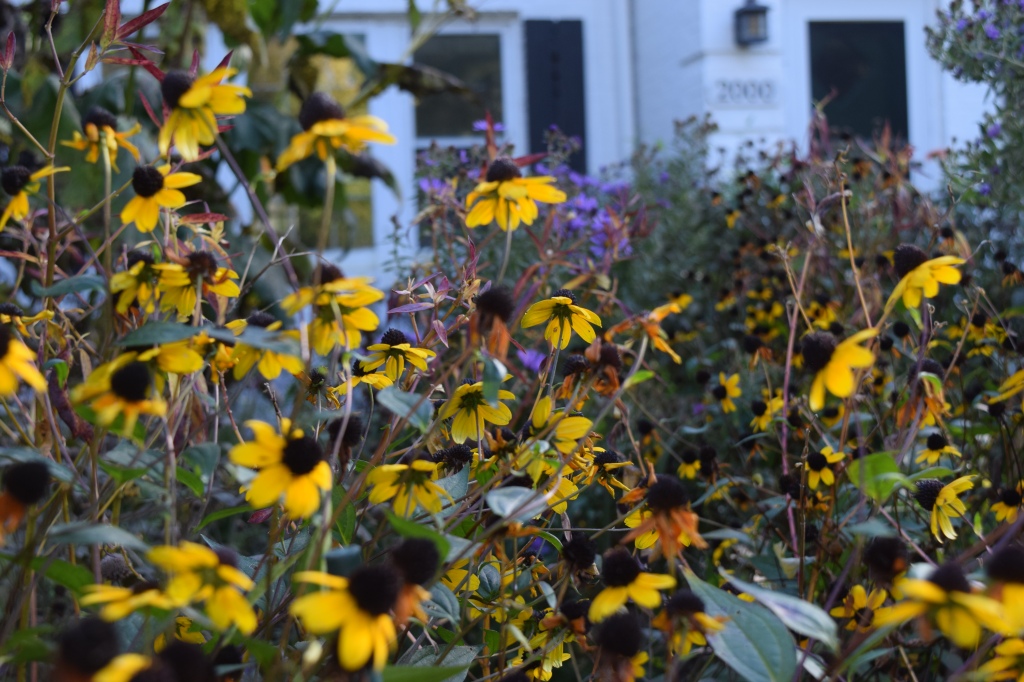 Brown-Eyed Susan (Rudbeckia triloba) is slowing down, but still has lots of flowers. 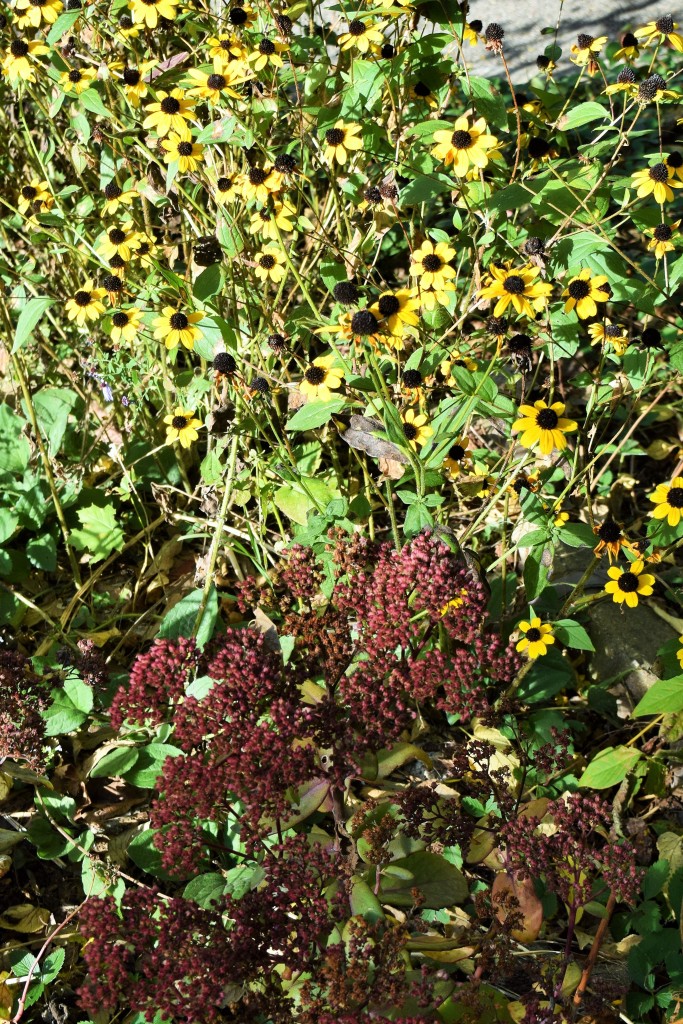 In the East Parkway Bed the Brown-Eyed Susan combines nicely with the dried seed heads of Sedum spectabilis ‘Matrona’. I generally don’t like Sedums, but I added more ‘Matrona’ in this spot a few weeks ago.

I should mention here that I took these photos because Judy was out of town (in Las Vegas, no less) on a business trip. So the photographs are not up to the usual standard. 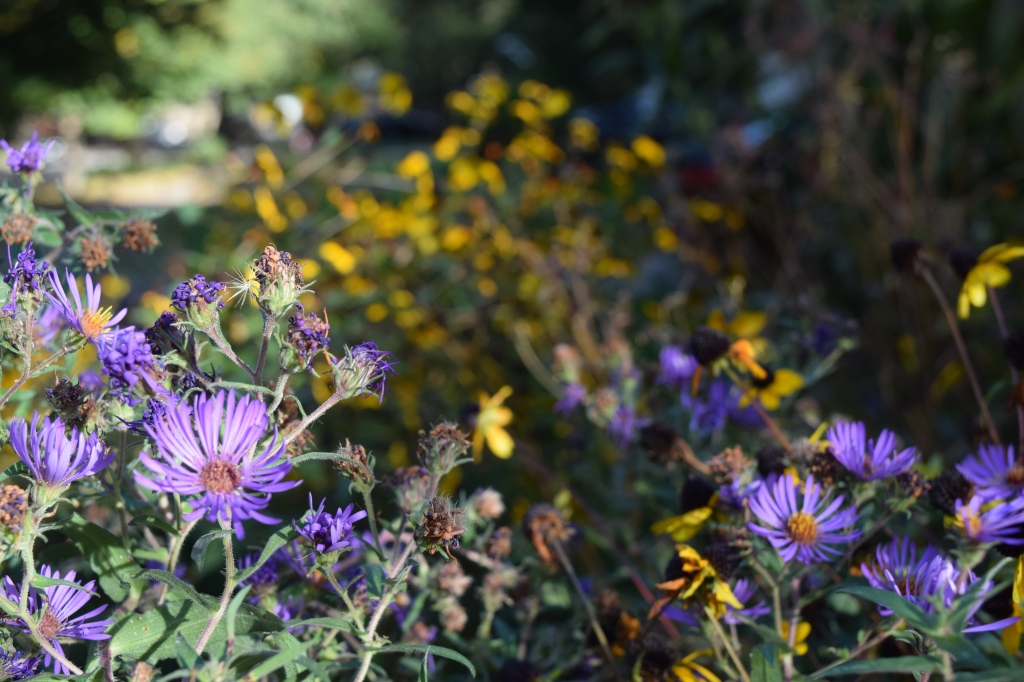 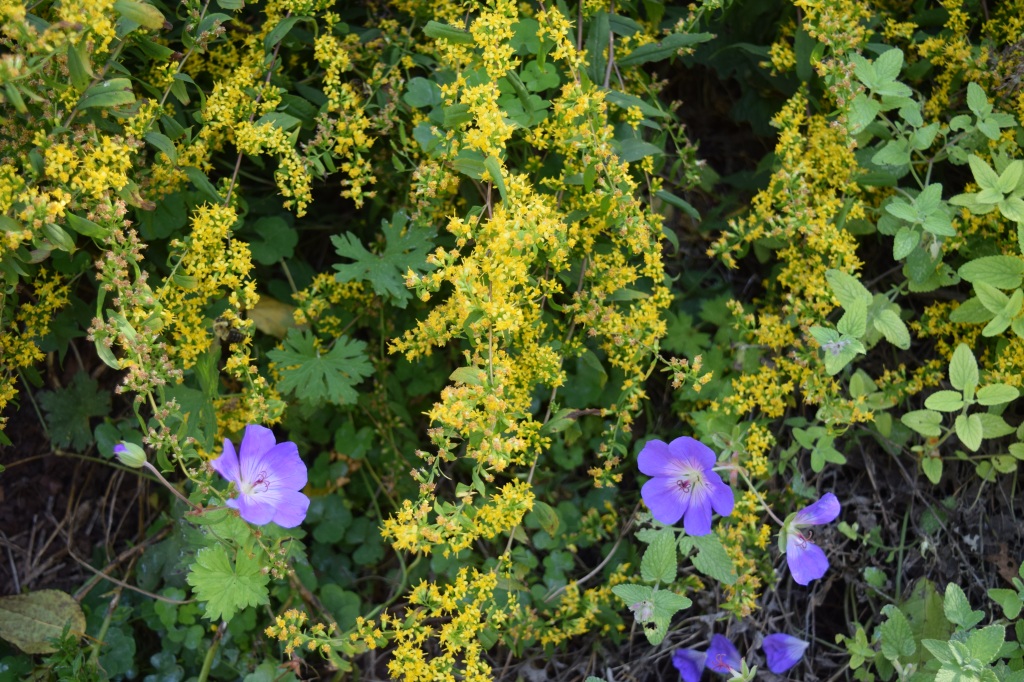 And there’s lots of Bluestem Goldenrod (Solidago caesia), here joined by a few blooms from the hybrid Geranium ‘Rozanne’. 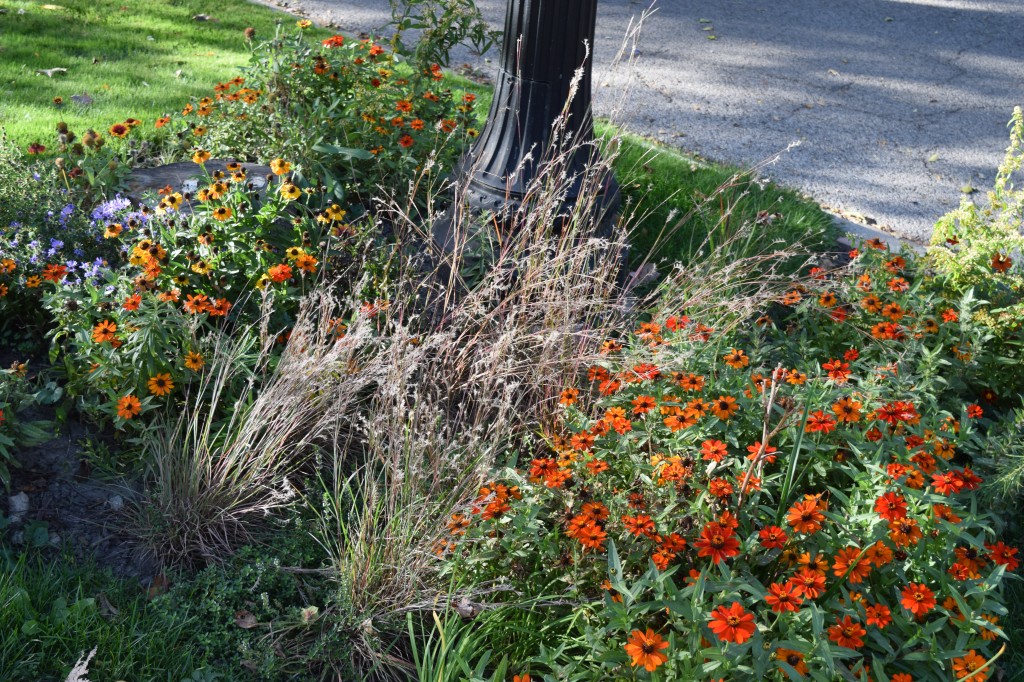 As long as I don’t look too closely, I am really pleased with how this Lamppost bed has turned out this year. If I do look closely, I am appalled by all the weeds hiding among the new perennials. Fortunately the Zinnia elegans ‘Profusion Fire’ provides lots of distraction. 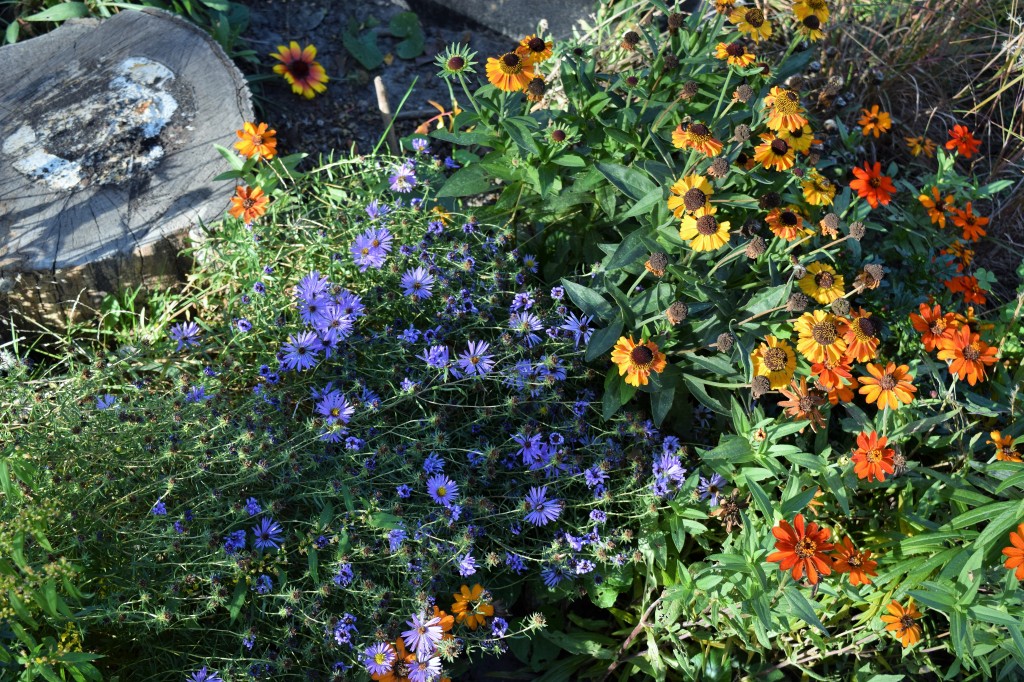 Aromatic Aster (Symphyotrichum oblongifolius) and Helenium autumnale ‘Short ‘n’ Sassy’ continue to make beautiful music together. I’ll say again that I am amazed by this Helenium’s lengthy period of bloom. And the Aromatic Aster is no slouch, either. 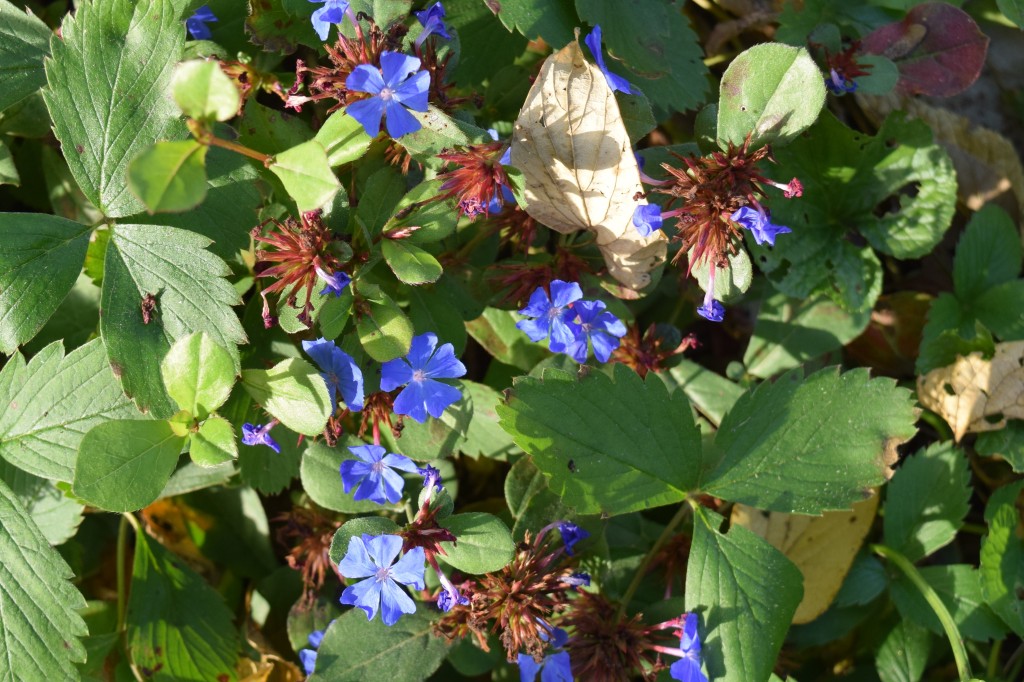 Elsewhere on the Parkway Bed, Plumbago (Ceratostigma plumbaginoides – say that five times fast if you can) and wild strawberry (Fragaria virginiana) combine to make a nice ground cover. 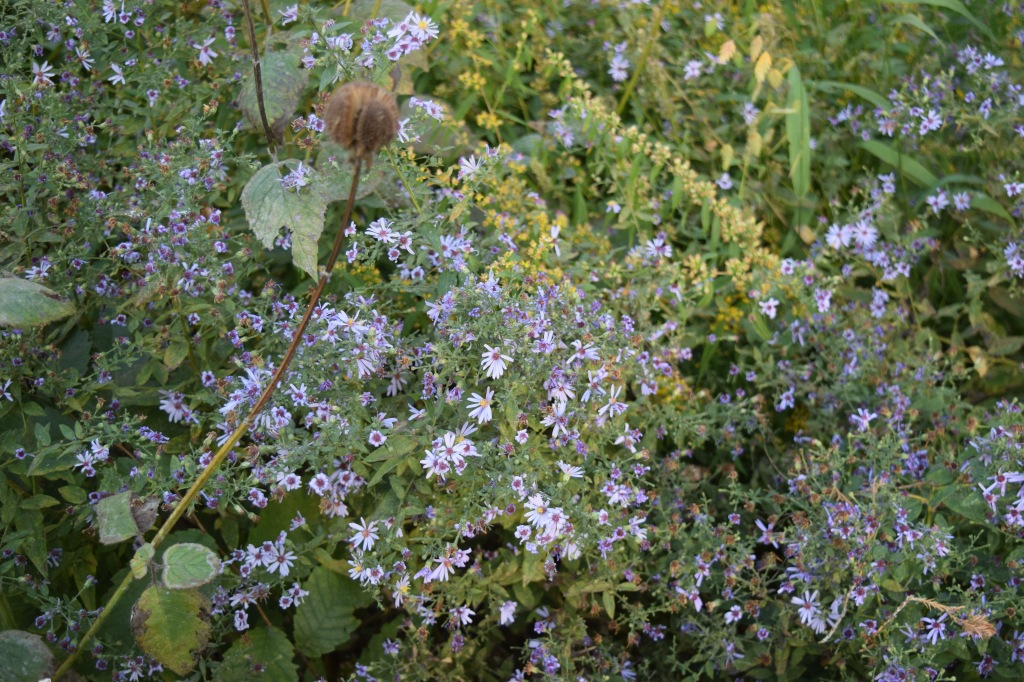 Short’s Aster (Symphyotrichum shortii) is another aster with staying power. 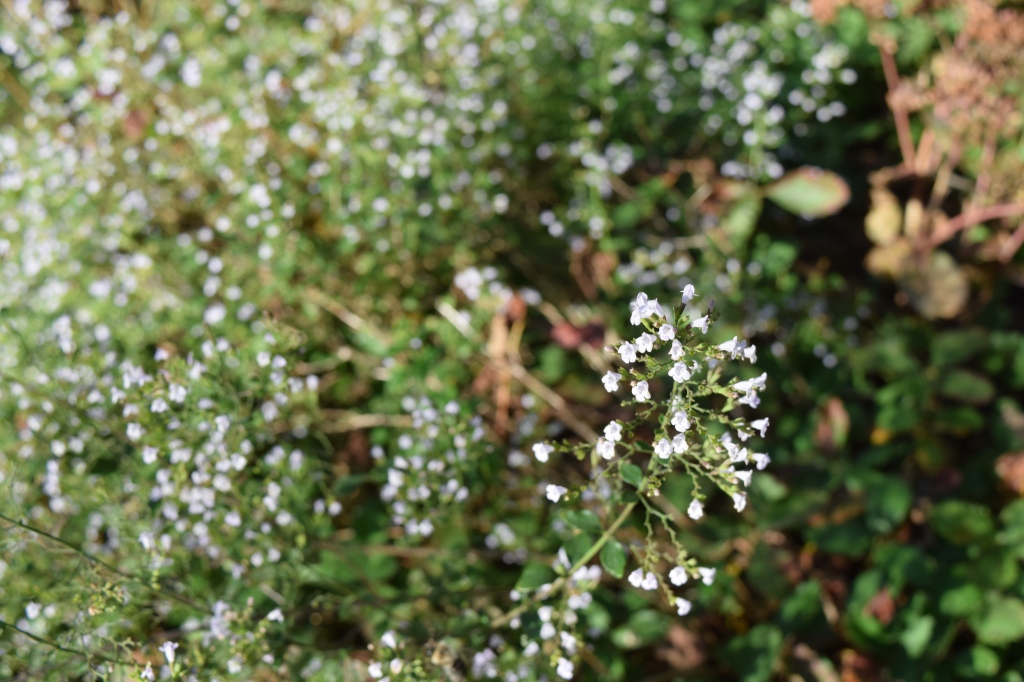 Calamint (Calamintha nepeta) has mostly recovered from a rough early season. First, it seemed to lose some ground to our long winter. Then it was almost overwhelmed by three lined plant bugs. All this surprised me, because Calamint is supposed to be a super tough plant that seeds itself like crazy. So far that has not been my experience. 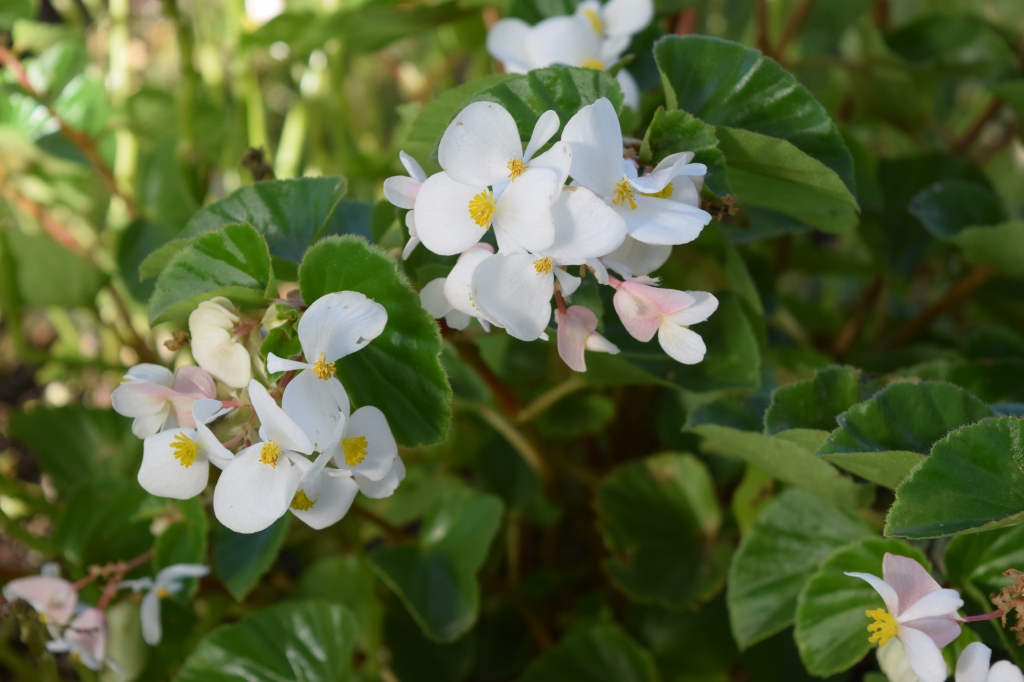 In the back garden I’ve pretty much given up on watering the containers. All the container plants are at death’s door except for these ‘Dragonwing’ begonias, who don’t seem to care whether I water them or not. Who knew they were such tough customers?

I am linking this post to Garden Bloggers’ Bloom Day, hosted by Carol at May Dreams Garden on the 15th of every month. Click here to see more October blooms from all over the world.