Posted on September 23, 2014 by gardeninacity

Our week in Wisconsin was about more than just falling out of kayaks. It was also about enjoying the natural world. And we particularly enjoyed the natural world on the day we went hiking at the Hunt Hill Audubon Sanctuary, which was about 30 miles from our cabin.

Hunt Hill has 400 acres of woods, meadow, and bogs – plus two glacial lakes. It was also one of the few places to hike where you didn’t need an orange jacket to reduce the chance of being shot by a hunter. While the main deer season is in November, in mid-September Wisconsin allows black bear hunting, wild turkey hunting, and crossbow hunting of deer. Hunting goes on in most public lands, but not in Audubon Sanctuaries.

There was still plenty of mayhem going on, though mostly it was perpetrated by beavers.

Walking near one of the one of the lakes we were astounded by the number of trees cut down by the little furry vandals.

In what may have been acts of rodent sabotage, we found large trees that had been felled so that they lay across hiking trails.

I understand about how they use trees to build dams, but many of the trees taken down were not by the water. Perhaps those were just for practice, or it might have just been beavers on a rampage.

We were in a part of Wisconsin where the deciduous forest gradually transitions to coniferous, making the woods here especially diverse.

Birch and white pine mixes with oak and maple.

Walking through a bog we saw the green fruit of what seemed to be jack-in-the-pulpit. I didn’t think they grew in bogs, and wondered if these might be the berries of pitcher plants – but Google Images made that seem unlikely. 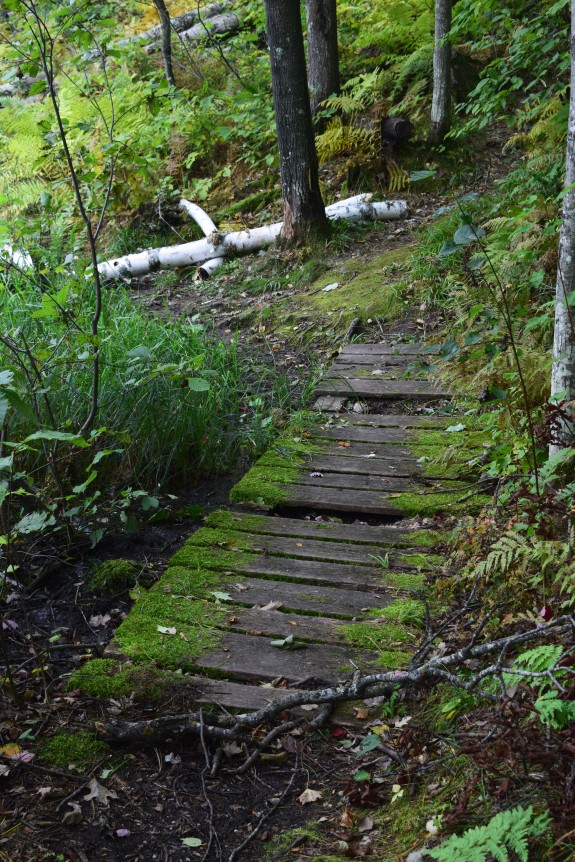 This was a happy place for mosses.

Not to mention fungus.

We also hiked through some of the meadows, which were traversed by grassy trails.

You could see how these meadows would easily turn into shrubland and then woods without regular mowing.

There were grasses, asters, goldenrods, and other wildflowers – but also lots of wild raspberry and young woody plants.

The raspberry leaves were turning various shades of red, which combined nicely with the yellow goldenrod and blue aster.

We never actually did see any beavers or even much in the way of birds, but I am told that in general the birdwatching is excellent. And they have a very successful bluebird breeding program!

If you find yourself in northwest Wisconsin, near the town of Sarona, Hunt Hill is worth a visit. Just watch out for falling trees.

24 Comments on “When Beavers Attack”