I was going out this morning to pick tomatoes when I saw an unfamiliar butterfly on the Mexican Sunflowrer (Tithonia rotundifolia). Judy grabbed her camera and came outside to get some pictures. However, the humidity was so high that her lens fogged over.

So, if you’re wondering what photos look like taken with a fogged over lens, here you go. It took several minutes for the lens to clear.

The butterfly turned out to be a Giant Swallowtail. We’d never had one in the garden before to my knowledge.

The Giant Swallowtail was really loving the Tithonia, which has turned out to be golden in terms of attracting butterflies to the garden.

Plants in the citrus family are hosts to Giant Swallowtails. In Illinois, that means Prickly Ash (Zanthoxylum americanum) and Hop  (Ptelea trifoliate) trees, as well as Common Rue (Ruta graveonlens). I’m tempted to plant some Common Rue myself, though I’m not sure where to get hold of it. Giant Swallowtail caterpillars camouflage themselves by resembling bird poop.

The damaged wings indicate this particular Giant Swallowtail has taken some hard knocks, or bites.

The Swallowtail was fluttering from bloom to bloom on the Tithonia. Even while feeding he kept his wings moving, which made getting a good shot challenging for Judy. At one point, she saw a bumblebee chase the swallowtail away from a flower. 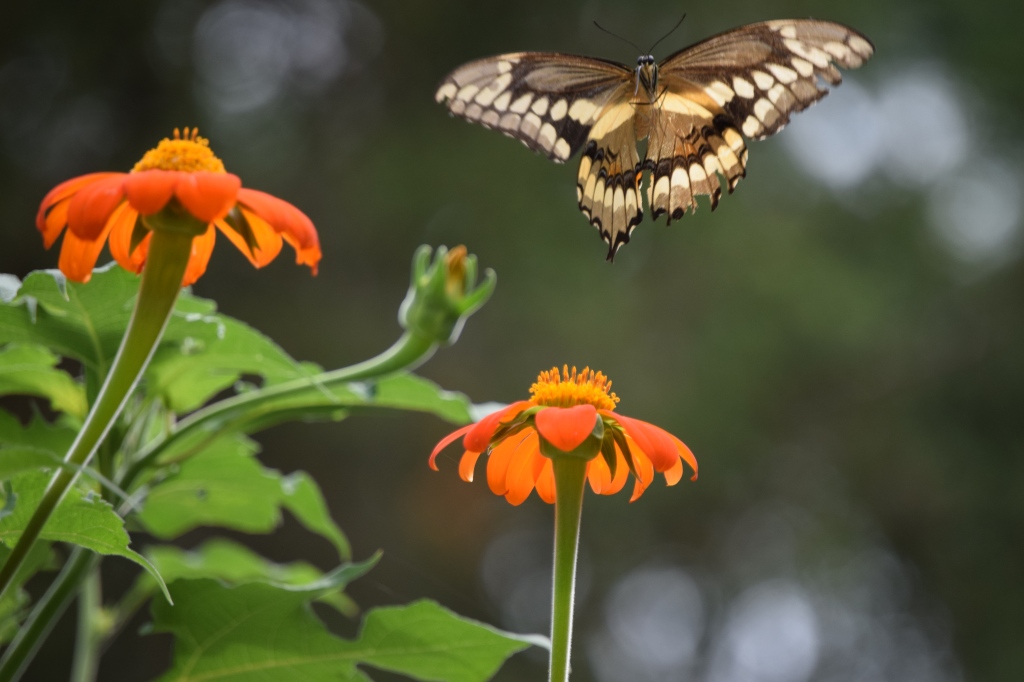 Giant Swallowtails aren’t uncommon, but I’m highly gratified every time I find a new butterfly species in the garden.