Posted on August 8, 2014 by gardeninacity

With high summer comes a new cast of players in the front garden’s Driveway Border. There are many stars in the border, and it is gratifying to see them strut their stuff. 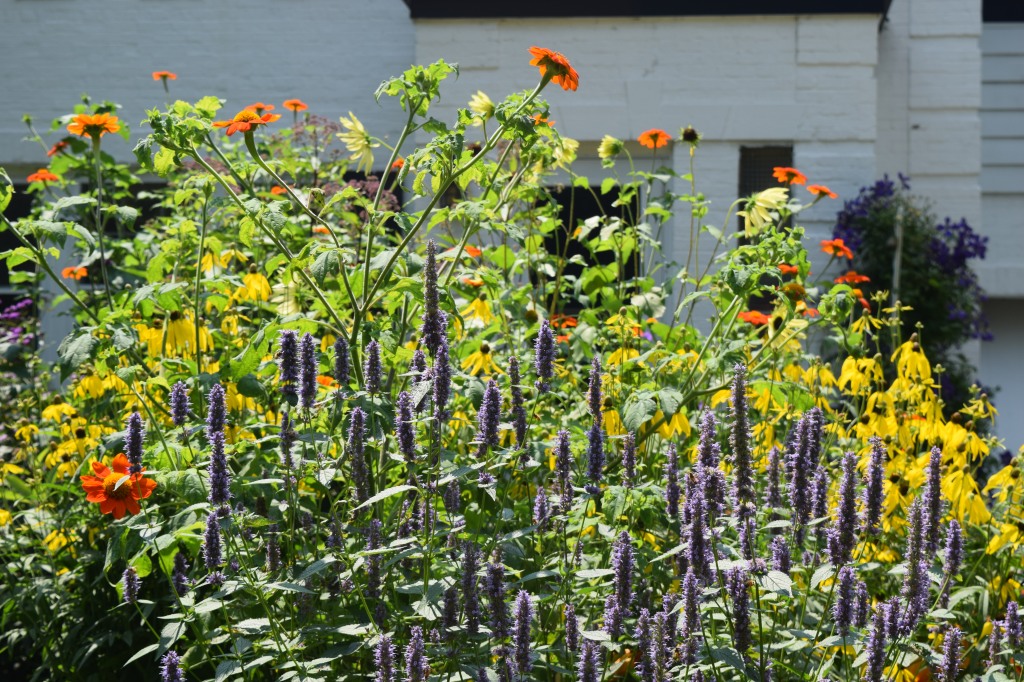 I’ve already written about the virtues of this plant, but let me add now that it’s blue-lavender flower spikes beautifully complement the yellow and orange daisies of summer.

My new ‘Adonis Blue’ butterflybush (Buddleia) is more of a supporting player now, though it provides a sweet scent that for passersby on the sidewalk. This is its second summer and it is flowering nicely. ‘Adonis Blue’ is a compact variety that is supposed to grow to no more than 4-5′, though I think it is less than 3′ in my garden this year. In this region it dies to the ground every winter, which is fine with me. I just wish they had picked a cultivar name that wasn’t so suggestive.

That’s yellow coneflower (Ratibida pinnata) right next to the anise hyssop. I like the bright clear yellow of the flowers. The endearingly droopy petals remind me of floppy dog’s ears.

Though flowering abundantly, the Ratibida stems are  way too floppy this year. This is not so endearing, and it has been a struggle to keep them minimally upright without creating the “perennials wearing a corset” look. I may try cutting them back next year and see what happens.

Next year I think I will plant just two or three Tithonia instead of four. Just one of these plants provides a big presence. I will also avoid placing them east of other tall plants, which forces the Tithonia to grow as tall as 7-8′. Also, I’ll try to place one so that it holds up the ‘Gateway’ joe pye weed (Eupatorium purpureum ssp. maculatum).

The annual sunflowers (Helianthus annuus) have also contributed drama and color to this year’s Driveway Border. However, the only one to keep putting out new flowers over a long period is ‘Italian White’, whose copious black-eyed flowers range from sunny to very pale yellow.

Tall ironweed (Vernonia altissima) is a member of the cast who has not had as much impact as I had expected. This is partly because it is overshadowed by the Tithonia.

The ‘Gateway’ joe pye weed is not really exerting a lot star power just yet either. That may change when it is in full bloom. I am wondering: could there be so many bold, dramatic plants at the same time that some of them are losing their impact? But then I conclude: Nah. I reject the concept of too much of a good thing.

Who are the blooming stars of your beds and borders right now?

← Beeing There
I Need More Lilies →