Posted on February 16, 2014 by gardeninacity

This will be my last post on Great Dixter. As I’ve already said, it was our favorite English garden. We liked it so much, in fact, that I felt compelled, almost against my will, to enjoy some of the topiary. But only because it was so very silly.

This was in the Peacock Garden. It’s called the Peacock Garden because it is full of topiaries that were originally meant to be blackbirds, pheasants, and other sorts of birds. Eventually, though, they were all referred to as peacocks. Christopher Lloyd’s mother called this part of the garden as the Parliament of Birds.

When I first saw these topiaries, I had to laugh. At first I thought they looked like turkeys, then squirrels. They certainly look nothing like peacocks.

I don’t know if these topiaries were meant to be humorous or whimsical but that is how they struck me. Not something I would want for my garden in a million years (nor would I recommend anyone spending the time needed to shape the yews in this way), but entertaining nonetheless.

I suspect there was also something tongue-in-cheek about this yew hedge shaped like a ziggurat.

Fortunately, there was more to the Peacock Garden than topiary peacocks/turkeys/squirrels.

Tall grasses and flowers grew luxuriantly around the topiaries. A hedge of calico aster ‘Horizontalis’ (Symphyotrichum lateriflorus) lines one of the stone paths. It was not quite ready to bloom. I’ve found calico aster to grow to shrub size and seed aggressively in fertile soil, so I only plant it in difficult spots. Apparently it is more manageable in England, or maybe it’s just this cultivar.

I think this is a path for the gardeners. A lovely mix of yellow, blue, and pink – with a giant variegated grass in the background to the left. 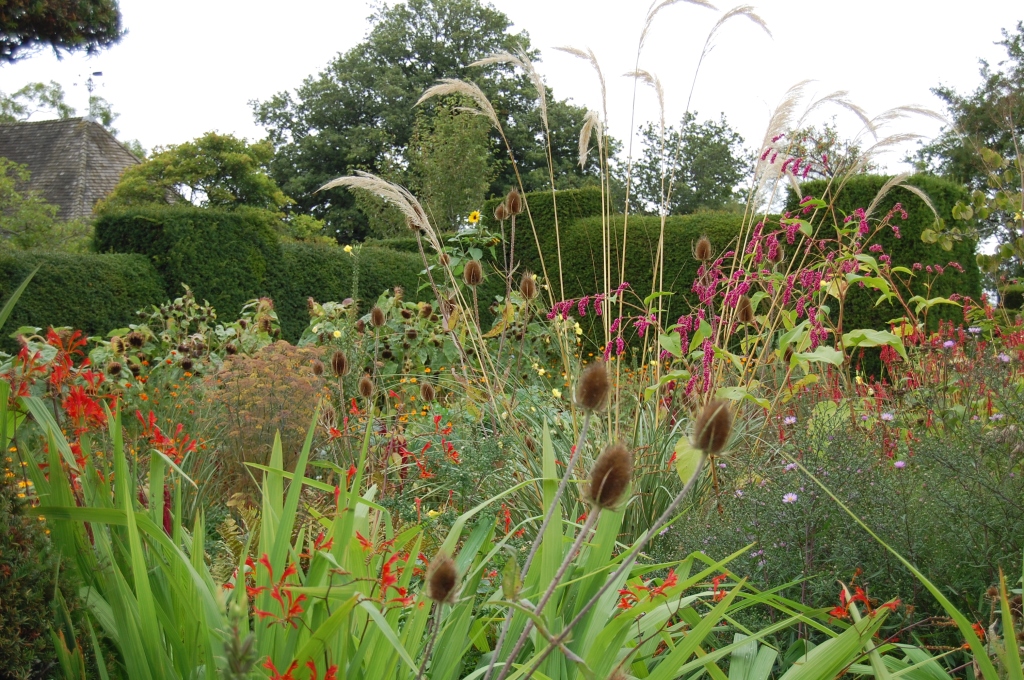 Crocosmia, asters, teasel, and kiss-me-over-the-garden-gate, which is the tall one with pink flowers in the background. Truly a great name for a plant, isn’t it?

What is this grass – is it Big Bluestem?

Leaving the Peacock Garden, the vista opened up a bit.

We saw something of the Great Dixter house. Lots of flowering containers congregated around the front door.

I liked how succulents were grown here and there on the roof. 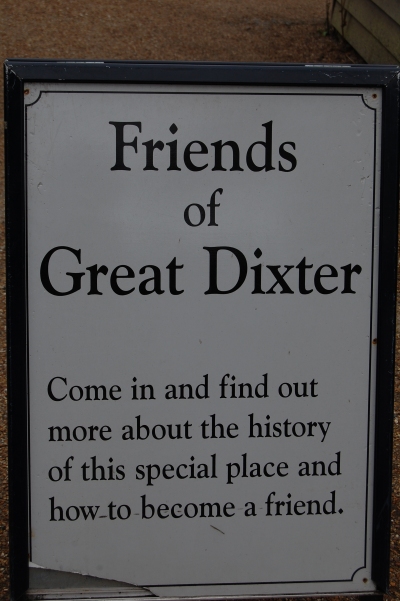 Great Dixter was an inspiring garden. The High and Orchard Gardens were for me the most exciting, fearless and unrestrained. Overall, I left thinking about borders much more mixed than I’ve been used to, and with a greater appreciation of yew and boxwood hedges. Also, I felt encouraged to be more experimental with color combinations.

Anyhow, what do you think – did those topiaries look more like peacocks, squirrels, or turkeys?

← Our Favorite English Garden in September, Part 3 (Or, Anarchy in the UK)
I, Citizen Scientist →