A Few Words About the Village of Giverny

First of all, Giverny is really tiny. The population is only about 500. This seems surprising for a place that is so well-known, but there it is.

So it is not surprising that you cannot take the train directly from Paris to Giverny. Instead you have to get off at the somewhat bigger town of Vernon, which is about three miles away. From there you can take a bus or a cab – or hike if you are so inclined. 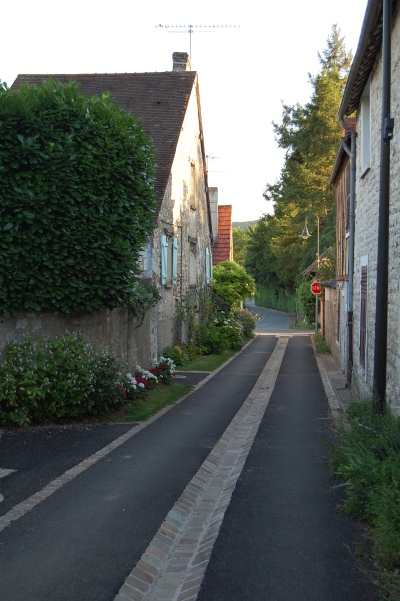 Giverny may be small, but apparently its origins are very old, with some evidence that it has been settled since Roman times. Its medieval days are hinted at in street names like Rue Des Juifs (Street of the Jews).

The village is full of stone houses and walled gardens. The walls are charming, covered with roses and flowering vines, though they frustrate the impulse to snoop on the private gardens within.

A nice place to stay at Giverny is Le Clos Fleuri, a bed and breakfast with three extremely comfortable rooms. The B&B is run by Danielle and Claude Fouche. Danielle is French but grew up in Australia, so her accent is a little unexpected.

They are very welcoming and friendly, and Danielle is more than happy to talk plants and gardening. In fact, their home is itself is a clos normande-type garden with hedges, fruit trees, roses, and other flowers.

Their place is about a ten minute walk from Monet’s garden. You can buy your tickets directly from Danielle, which enables you to avoid the lines for getting in.

It’s a walk through pleasant countryside, including an enclosure that features emus, an ostrich, and a pot-bellied pig.

There aren’t many restaurants in Giverny, but a nice one is the Restaurant Baudy (formerly the Hotel Baudy). We had an unusual but delicious salad there of chopped summer vegetables with creme fraiche.

After spending most of the day at the Monet garden, we got a ride back to Vernon and then took the train to Paris, changed stations and took another train to Chartres. More on the next leg of our journey soon.

← I Got Some More Plants
Chartres Cathedral From The Outside →

37 Comments on “A Few Words About the Village of Giverny”