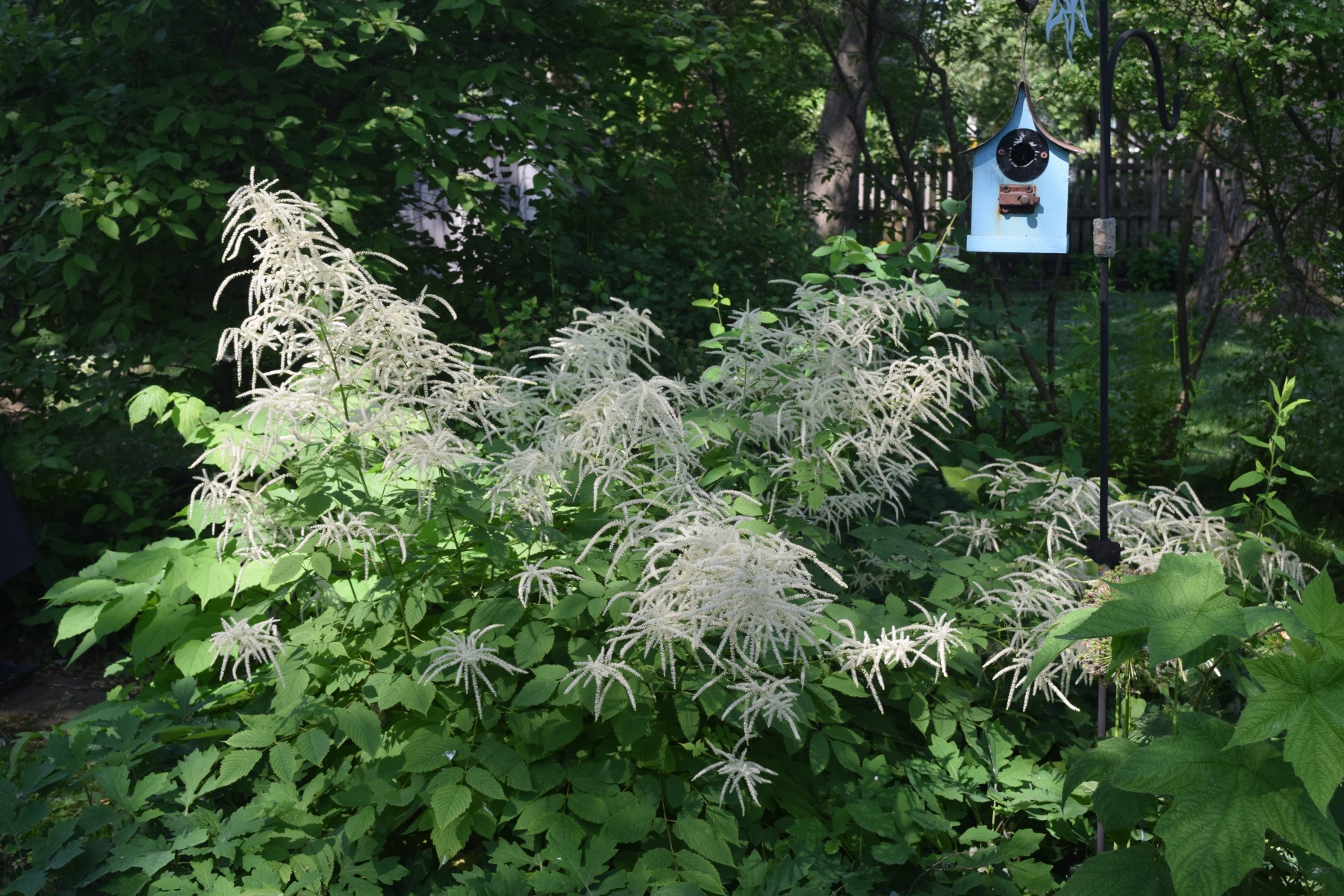 The garden is mostly quiet shades of green these days. There are some blooms, which tend to be white or blue. Here’s a selection, though I’m holding a few things back for future posts.

A view of our front door, with Clematis ‘Betty Corning’ to the right. On the door is a “living wreath” I got Judy for Mother’s Day. I’ll probably do a post about it some time this summer.

‘Betty Corning’ is just getting started with its bloom period – it will be really covered in flowers before long.

I think of this flower as blue, but I guess it is more of a lilac. As I’ve said elsewhere, in the right size it would make a great hat.

Geranium ‘Brookside’ is blooming along the west edge of the Sidewalk Border. It was planted last fall so I think it looks ok, especially since it is getting chewed up by Four-Lined Plant Bug. I like how the Hoary Vervain (Verbena stricta) has volunteered along the same edge between the Geraniums. It will bloom later in the summer. The Vervain is more vertical, the Geranium more sprawling.

But it is irritating as always that they close each day before noon. Poor work ethic.

Nepeta is blooming with its dusty blue flowers. There is ‘Walker’s Low’ in the Parkway Bed (above), and ‘Six Hills Giant’ in the Driveway Border. ‘Six Hills Giant’ has lots of flowers but it’s flopping, as it does every year. Perhaps its name should be changed to ‘Six Hills Giant Having a Nap’.

The little shrub rose ‘Cassie’, at the base of the front landing, is smothered in blooms.

The semi-double white flowers are small, but prolific.

Years ago I was inspired by Lurie Garden’s River of Salvia to plant a patch of Salvia in the Sidewalk Border. Eventually it was shaded by taller plants and had to move. Now it is dispersed to several spots, including this ‘Caradonna’ in the Lamppost Bed. In this location it is doing well, and makes me wish I had more Salvia concentrated in a single spot.

Similar story with the Smooth Penstemon (Penstemon digitalis), which was moved around before ending up in the Left Bank Bed. We have the straight species and the cultivars ‘Husker Red’ and ‘Dark Towers’.

Heading into the Back Garden, we pass under the arbor where the rose ‘Darlow’s Enigma’ is just starting to bloom. Despite the drought, it has a generous number of flower buds. This rose is a rambler with small, single white flowers. (I really like white roses, preferably single or semi-double.) They have a light honey scent. ‘Darlow’s Enigma’ is supposed to be relatively shade-tolerant, and it is doing ok in this spot in part shade.

In the Back Garden, Goatsbeard (Aruncus dioicus) is thriving and has bulked up very well. The fuzzy white flowers look so good in the shade.

We’re experiencing a warm summer, and the drought continues to intensify. However, thanks to strenuous watering, the garden does not look stressed. This is a good time to take a deep breath as we await the hot colors of summer.

← Alliums Of Silver And Blue, Plus Nesting Chickadees
Martagon Lilies For Shade! →

41 Comments on “Some Mid-June Flowers”