winter tomatoes can also be good 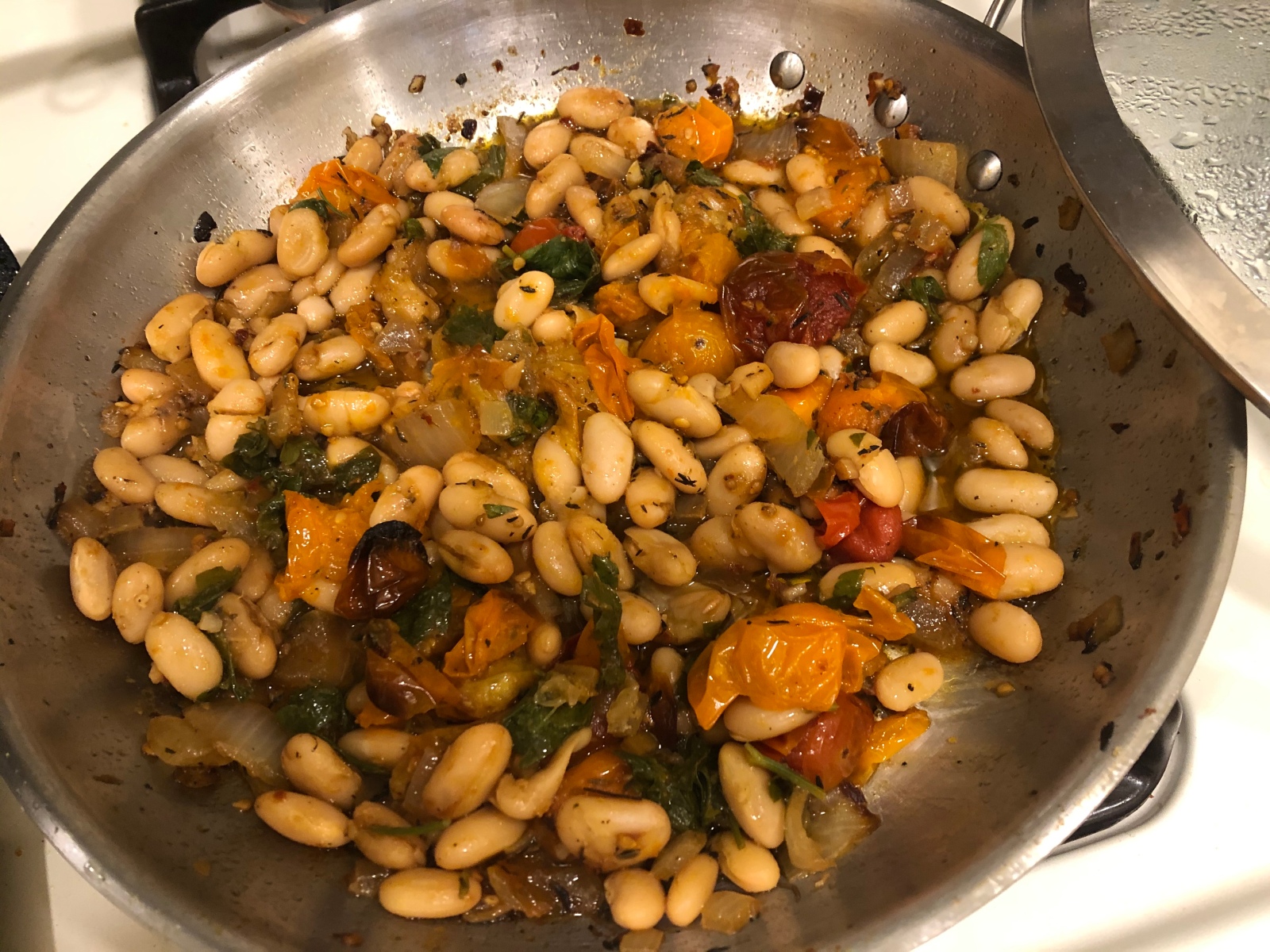 Posted on December 22, 2020 by judyatgardeninacity

Now, if the previous post made you long for summer tomatoes, here is a recipe for the next best thing — a roasted tomato and bean appetizer to put on crusty bread, using winter cherry tomatoes (even ones that are past their prime).

Toss the cherry tomatoes with the olive oil, thyme, salt & pepper, and roast at 425 degrees for about 25 minutes – until they begin to caramelize and turn brown around the edges. While the tomatoes are roasting, sauté the onion with a bit of olive oil in a pan big enough to hold the whole dish (my pan is 10 inches). When the onion is soft, add the garlic cloves, and cook briefly. Add the cannellini beans, parsley and lemon, and heat through. When the tomatoes are done, scrap them and all their juices into the pan with the beans. Add the red pepper to taste.

Eat warm or cold, on crusty bread or on crackers. Or straight from the pan, with a spoon.

Think about summer. Repeat as needed.

I will admit here that this recipe is the result of a felicitous mistake. I set out to make Roasted Tomato and White Bean Stew, from the New York Times website, but somewhere along the way, I lost my train of thought. I was also baking some crusty bread, and I believe Daniel was making homemade bagels, and we have a very small kitchen, and too much was happening. I only had three-fourths of the tomatoes the original recipe called for, and I meant to reduce everything else proportionately, but I didn’t, except for the beans, where I cut the quantity in half. (My real goal for this exercise was to use up the slightly wilty cherry tomatoes, which had been sitting on the counter making me feel guilty for days.)

By the time I dumped the tomatoes into the beans and onions, and of course tasted the result, I had forgotten that I was aiming for stew. I dunno, I was admiring Daniel’s bagel-dipping technique, or something. Anyhow, the roasted-bean-and-tomato dip or spread or whatever it is (please feel free to tell me what you would call it in the comments!) was so delicious, all other thoughts were blown out of my mind, and it wasn’t until later that I remembered it was supposed to be a stew.

22 Comments on “winter tomatoes can also be good”